Before I start complaining about the bugs in the game, let me say this: so far New Vegas had fewer problems than Fallout 3 for me. I know, it’s wild. A game made by Obsidian on Bethesda engine should be rife with game breaking bugs but (knock on wood) none of these showed up yet. It does not mean they are not there, but luckily I was able to avoid them somehow.

For example, Fallout 3 had a persistent bug that would constantly crash my game to desktop when entering VATS. It didn’t happen all the time, but often enough to be incredibly frustrating. There was also some water reflection bug that would crash the game if I looked at a puddle of water under the right angle. New Vegas does not have either of these, which made me a very happy camper.

The very old physics bug is still there though – the one that has been around since Oblivion. You can test it yourself: walk up to a table or a shelf with bunch of items on it and take one of them. More often than not, everything else that was on the same surface, will inexplicably float up about half an inch into the air, and stay there. If you nudge any of the floating items with the Z button or bump them with something else they will drop down to the surface, but otherwise they will just stay in mid air forever. It is not a big issue tough, and I suspect the cause is burred somewhere really deep in the physics engine guts, because Bethesda now has 3 games and a few expansions and DLC’s that are all affected by it.

People keep telling me about some crazy save game destroying bug that affects the game, but I have not seen that one yet. I bought the game through Steam and I have seen it update it at least once so far, so I’m thinking that maybe the issue got fixed already. Or maybe I’m just lucky.

By far this was my most favorite of all bugs I have encountered: 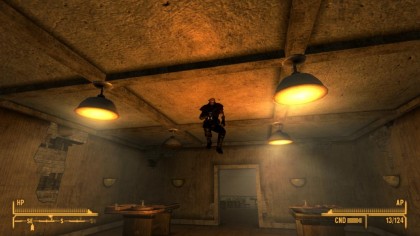 Deputy Beagle stuck in the ceiling (click to enlarge)

Yeah, that’s Deputy Beagle from Primm with his head stuck in the ceiling. I have no clue what happened here, but that’s how I found him when I rescued him from the Powder Gangers and he ran off. He eventually got himself unstuck somehow, after I reprogrammed the Protectron to become the new Sheriff, because I saw him walking the streets of Primm on my subsequent visits. But his “head in the ceiling” episode really made me laugh.

This is not really a bug but an interesting implausibility: 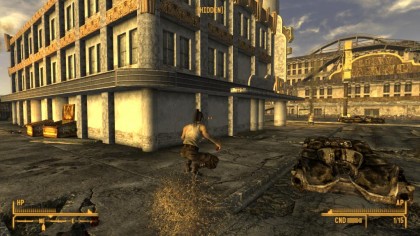 Yes, I am crouching on top of a tumbleweed. I guess this is a limitation of the game engine – there is probably no way of making semi-solid, semi-destructible objects that would simulate how a real tumbleweed would react to my attempts to jump onto it. At least not without making some more or less complex changes to the engine itself. Still, I found it kinda funny.

Another fairly hilarious bug shows up during some death animations that causes the body to deform in weird ways. I saw my character’s neck elongate, and limbs grow and shrink in size for no reason. Unfortunately I never had FRAPS on to record it when it happened so I have nothing to show for it.

Other than that though, the game has been pretty good to me. It only crashed few times on me. First time was when I launched it for the first time, and was creating my first character. As soon as the doc in Good Springs gave me the face designer gizmo the game freaked out and died. On a subsequent try it ran fine, and then crashed again when got camera control and started spinning it around to see how my newly designed face looks from different angles. Then it crashed a few times when I left the game on for a long time and the screen-saver kicked in, or when I tried alt-tabbing from the game to do some other stuff.

At one point, I also had an NPC turn hostile at me for no reason. It was the Ghoul trapped in the basement of the rocket facility. We had our little chat, I agreed to find his friend and as soon as the conversation was over he started shooting at me. Reloading game helped though.

Other than that, the game has been good to me. Have you experienced any funny bugs? How about game breaking ones? Share in the comments. Please avoid spoilers though – I still haven’t finished the game.

This entry was posted in video games and tagged fallout, fallout new vegas. Bookmark the permalink.