Those of you who read this blog know that I am an exclusive PC gamer. I don’t own any of the current gen consoles, and I’m not really planning to buy any of them because they really don’t offer anything to me. Last console that I have actually owned was the original Playstation. Some of the youngsters on the interwebs these days probably don’t remember this, but back in the PS1 days, playing FPS games on consoles was a slightly odd idea. To that end, I never actually played one. Not until last week when a friend invited me to play some Call of Duty on his PS3.

It was an interesting experience, since it allowed me to see first hand how the FPS games work on the consoles. I always scoff at the idea of playing them with a controller but I have never actually tried it before. Console players swear by their gaming devices, and keep telling me how the technology leaped ahead since the days of venerable PS1. And perhaps it did. I did not expect perfect mouse like controls, but I went there with an open mind.

I did few hours of intensive testing of the “console FPS experience is not much worse than PC FPS experience” hypothesis, then went back home and fired up Team Fortress 2. After the whole ordeal, I just needed to play a real FPS game for a little while. Yes, it was that bad.

It is not just the controls though. Granted, I was really, really struggling at first. I believe that most FPS games on consoles use both analog sticks for control: the left one for movement, and the right one for looking around. It was really strange to have to use two thumbs on two hands for something I usually do without thinking by just flicking my wrist around. While the analog sticks have pretty decent sensitivity range, it is almost impossible to use them to move the way I usually do in multiplayer games. It is for example really difficult to quickly glance behind you without actually stopping or changing direction too much. 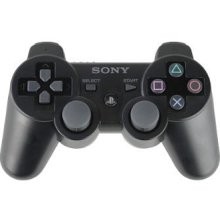 I don't care what anyone says, this thing was not designed for FPS games.

Fun fact I noticed: when faced with an enemy a lot of CoD players would suddenly drop prone instead of dodging behind cover. This struck me as unusual, until I realized that I was not the only person in the game who struggled with the up/down movement of the analog stick. I confirmed this by watching kill cams and spectating while waiting to re-spawn. Most players would try to keep their gun barrel leveled, and then when they found the enemy they would zig-zag their right stick left and right until they got their cross-hair on the target. You almost always seem to push it to hard the first time, and then need few fine movements to get it where it needs to be. Dropping prone introduces a whole new axis to the equation and confuses the attacker, giving the prone player an extra second to aim. Initially I thought I had this problem because I was unaccustomed to the controls, but I have seen this happen more than once while we were playing. I was actually kinda amused – you would never actually find two players stand in place facing each other fumbling with their aim controls on the PC. Then again, perhaps there were a lot of n00bs online that day – I don’t know. All I’m saying is that aiming using the dual shock controller is slower and less accurate. I really haven’t seen beautiful, fluid head shots while playing, but instead I have witnessed a lot of zig-zaggy, wavy movement.

Here is another thing I did not like about the console experience: resolution. I don’t know if it was just me, or if it was because we were playing split-screen game but the game looked decidedly worse than what I grown used to playing current generation PC games. Let me put it this way: when I played PS1 games I always felt the graphics were “grainy”. Now I was messing around with a PS3 game, and the same “grain” was back. Maybe this is an artifact of the pixel size on most TV’s as opposed to monitors. It made me feel as if we were playing a 3 year old game and not something that was released few days ago.

Quick question: when was the last time I have complained about graphics on this blog? I won’t say never, because someone will probably find a link and rub it in my face but I can honestly say I can’t remember the last time I did it. I just don’t pay that much attention to visual side of games. So for me to notice and reflect on it, you know this had to be fairly drastic. I don’t know… Maybe I’m spoiled. I mean, it could be that my gaming machine is actually a bit above PS3 in specs. I’m to lazy to actually look it up though. If anyone wants to do the leg work, feel free.

The bottom line is this: I now know how people play FPS games on a console, but I am still not sure how they enjoy it. I mean, yes the games are still fun, but it feels so… I don’t even know how to describe it. It is as if someone took an FPS game, then rounded off all the sharp edges, and padded it with foam so that the kids don’t hurt themselves. It is like playing a kiddie playground toy version of the real thing. At least that’s my impression.

Oh, and IMHO Team Fortress 2 is a much better game than CoD: Black Ops when it comes to multiplayer experience. Then again I have formed this opinion after playing CoD for like 3 hours on split screen so don’t crucify me over it.


11 Responses to FPS Games on Consoles