Back in September, I wrote about American Gods by Neil Gaiman. As I mentioned back then, my introduction to Gaiman was via the excellent Sandman comics. While his novel was very different from the comics, I still liked it. And so, I picked up Anansi Boys expecting pretty much the same experience. I was pleasantly surprised. 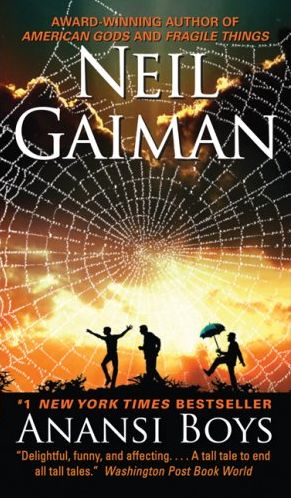 While Anansi Boys takes place in the same universe as American Gods, the two books are quite different when it comes to style, mood and pacing. While the later was mostly serious (albeit often light hearted, and humorous) the former is outwardly funny. And it is not really situational humor, or some hammed up absurdism. The humor in the novel stems from Gaiman’s razor sharp with. It’s the way he describes his characters, sets up his scenes and conducts narration. His off-hand observations are so astute, and assembled so meticulously to maximize humorous payload, that you can’t help but grin when you read them.

The story is nowhere near as epic as that of American Gods. Fat Charlie – a very average, very boring and very ordinary man finds out that his estranged late father indeed a legendary spider god Anansi, and that he has a brother he has never met. When charlie tries to reconnect with his long lost sibling, he fails to realize that inviting a trickster demi-god into your life is probably not a great idea. He could for example steal your girlfriend, get you fired, convert your spare room to some some tropical island palace and get you in trouble with the law. And it turns out it is not that easy to kick out an unwelcome god out of your apartment. So charlie seeks help from other gods, which only causes more trouble.

It’s not especially deep, but somewhat thoughtful and cute little story about overcoming adversity, finding love and/or confidence and bunch of other stuff. It’s a quick and enjoyable read. If you want to pick up some light reading, or you just look for a book that is genuinely funny without trying to hard (Gaiman’s humor is subtle but insidious) this is a book for you.

This entry was posted in literature and tagged fantasy, neil gaiman, review. Bookmark the permalink.