I never really read Thor or Avenger comics so reviewing the latest batch of Marvel movies is a slightly different experience for me. While my rants about Spider Man, X-men or Daredevil were colored by my knowledge if the source material, I watched Thor with a clean slate. I have only encountered the blonde Norse god a few times, during major Marvel corss-over events when he crossed paths with the heroes I did follow. I don’t know his origin story, though if I read the Wikipedia article correctly, it was nothing like what was depicted in the movie.

So how was the movie? Well, it was silly, simplistic, infantile and painted with overly broad strokes. Actually, broad strokes is an understatement. The story was not as much written as it was finger painted or drawn with crayons. To put it simply, Thor is a kids movie. It offers preciously little to the adult viewer, but children are going to instantly fall in love in it’s larger than life protagonist and have no trouble following it’s simplistic story arc. But you know what? It is not a bad kids movie. It is nowhere near as nuanced as Up or WALLIE but the story is put together fairly well and has a clear message. 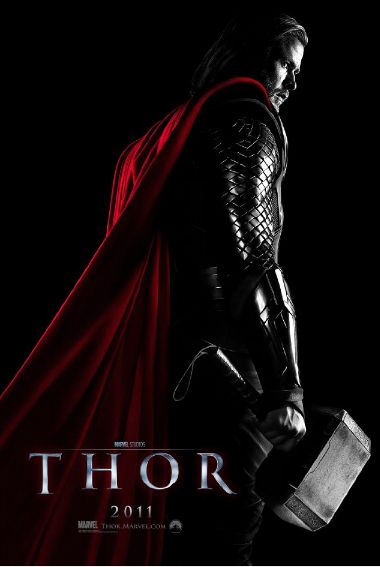 Thor is a brash, stuck up, irreverent brat. He defies his father – king of all the gods, and as a punishment gets sent down to Earth without his powers. Stuck in a mortal body, he learns humility, falls in love with a local scientist (Natalie Portman), and develops deep affinity for the people of the Earth. When his trickster-god brother Loki sends down an indestructible magical construct to kill him, he decides to sacrifice himself in order to save the local population – at which point the godly powers are restored to him. It is a classic coming of age type story. And you know what? It works.

I think we all like Iron Man so much because Robert Downy Jr. makes Tony Stark such a magnificent bastard. His character is complex and nuanced, much more due to characterization rather than to plot. But there is something to be said for the simplistic, archetypal and infantile characters of Thor. The god of thunder is a big man-child trapped in an adult body, but oddly enough this fits. It is what you would expect from a spoiled Asgardian prince.

Loki is transparent, immature and not very inventive for the “trickster god” but he actually makes for a compelling bad guy. Unlike the main antagonist from say, 2008 Incredible Hulk, he has real motivations, and reasons for doing what he is doing. He is a jealous, young prince of dubious heritage, growing up in the shadow of his incredibly popular brother. More of a confused, angsty teenager rather than an evil mastermind. But then again everyone needs to start somewhere.

Even Natalie Portman’s Jane Foster seems very child like, with respect to her relationship to the protagonist. Supposedly a respected scientist, she acts like a blushing schoolgirl on her first date whenever Chris Hemsworth’s Thor is in the frame. Her side-kick/intern played by Kat Dennings who is supposed to be a college student, has a personality of a “too cool for school” high school brat. There is this strange, fairy tale innocence to all the characters. No one acts alike an adult should act, but in the context of inter-dimensional gods, frost giants and ultra-secret governmental agencies it works just as well.

Somehow, Kenneth Branagh manages to pull a victory out of the jaws of defeat and whips the unworkable script, and abysmally bad dialogs into something that doesn’t actually suck. Kudos to him for that. The innocence of the characters fits perfectly, with the stylized over-the-top costumes, and the actors manage to deliver their silly lines with enough conviction to carry the plot forward. It is a marvelous thing – the movie should fold on itself and fall on it’s face, but it does not. It is not bad. And it is going to sell a shitload of action figures.

I was really curious about this movie right from the start. You see, in Marvel’s comic universe magic is a thing – it exists, and most of the super heroes are aware of it. It is not something unusual, especially in a world populated by mutants, and other super-powered individuals. Magic users are simply yet another type of super heroes or villains. But the movie adaptations of the marvel books, stubbornly refused to acknowledge magic. Juggernaut, whose powers and invulnerability have mystical origins, was instead introduced as a mutant. Movie makers would scrub their scripts to remove any mention of magic or mystical powers. But Thor is a Nordic god… Not a superhero or a mutant. Making him into anything other than he is would be a huge break with the source material.

It seemed like the Marvel movie team painted themselves into a corner. Introducing Thor required them to acknowledge existence of magical realms and Asgardian gods. More importantly, it was crucial to implement this revelation well, because Thor had to be back for the Avengers movie. If this film failed, it could jeopardize the bigger project.

I’m happy to report they handled it quite well, by quoting Clarke’s third law. Asgardians are not so much gods, but aliens with technology so advanced that it is indistinguishable from magic. They still have all the trappings of Norse gods, they still have incredible, super-human powers, and they still think of themselves as gods, and they are still the same guys who were worshiped by the Vikings, but they are not “truly divine” beings. It’s quite ingenious – they get to hand wave away all magic as very advanced technology without really altering the tone, and thematic continuity set by the other films. That said, magic still does not officially exist in the Hollywood version of Marvel universe. We probably will never see a Dr. Strange movie being made… Oh well…


One Response to Thor