If you remember my review of the original Thor movie, you might recall that I was slightly underwhelmed by it. One of the main weaknesses I pointed out in that review was that the film makers were still very much afraid to delve deep into the wacky Marvel SciFi/Fantasy mythos of ancient alien space gods and super beings. It was shot rather conservatively and made great effort to keep things really, really simple as not to confuse the audiences. Thor: The Dark World is a much different movie. The Avengers – the one of the highest grossing movies in the history of Hollywood was an extremely bold foray into just about the wackiest super-hero, space-fantasy mash-up imaginable and the audiences loved it. The new Thor movie similarly shakes of the conservative shackles of Hollywood action movie conventions and dares to be wacky, silly and even a little bit complex. 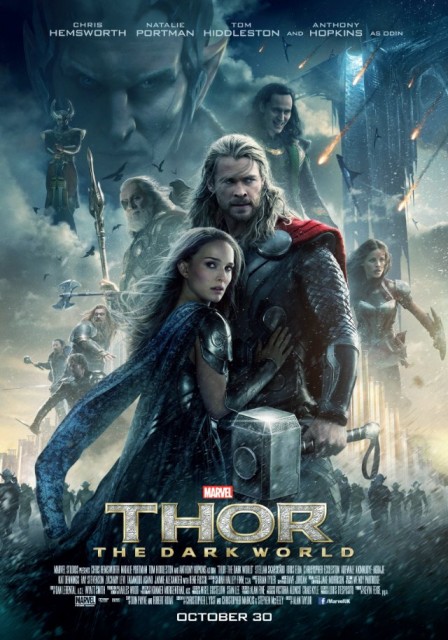 The story connects back not only with the original movie but also with the events depicted in The Avengers. It is revealed that after Bifröst, the space-bridge that allows Asgardians to travel between the worlds was destroyed in the first movie, the nine realms under their protection fell into chaos. Once it was repaired, Thor and his friends had to embark on a long peace-making quest. One of his many adventures in that period was the pit-stop on Earth to pick up Loki and the Tesseract. With Loki imprisoned, and the campaign winding down, Thor is torn between his duty to take over his fathers kingdom, and his desire to go back to Earth and be with Jane Foster.

In the meantime Jane is on Earth having the worst case of the Rose Tyler abandoned companion syndrome. Apparently after hanging out with the Norse god of thunder, nothing on Earth seems worthwhile anymore. So Jane spends her time looking for strange anomalies similar to those which lead to her first meeting with Thor in a forlorn hope they can be reunited again. In the process she finds an ancient, super-dangerous artifact known as the “aether” which which infects her body slowly poisoning her. Once Thor finds out, he whisks her away to Asgard in the hope of curing her and securing the artifact. The activation of the Aether wakes up it’s creators: the Dark Elves who were slumbering somewhere in deep space. These ancient, but all but forgotten enemies of the Norse gods mount a frontal attack on Assgard in an attempt to recover the artifact. 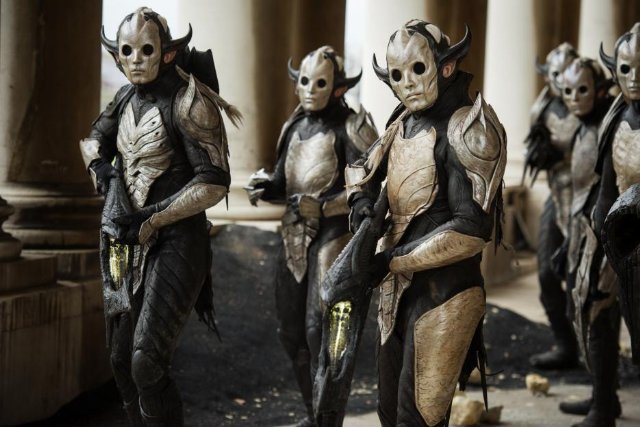 The attack is unsuccessful, but it is clear that Assgard defenses are not up to par with the Dark Elf technology. Many lives are lost in the attack, and much of the royal palace is destroyed. Thor proposes taking Jane off-world in an attempt to lure the Dark Elves into a trap, but Odin is determined to keep her in Asgard and turtle up fighting to the last man if need be. Thor is not to keen on this, and decides to make a pact with Loki to smuggle Jane out of Asgard using one of his secret passages. As you can expect, wacky hijinks ensue.

As you can probably figure out from the above synopsis, viewing of the original movie and The Avengers is more or less mandatory. But that’s a good thing. This installment of Thor doesn’t actually feel like a self contained movie, but rather as an episode in a much larger, and more complex story. And I absolutely love that. It feels right.

There is this discussion going on right now around all parts of the internet that modern TV is becoming more satisfying and interesting medium for telling complex, nuanced stories for adults than Hollywood could ever be. The self-contained format of a traditional movie is simply to time constrained to do any meaningful character or world building. TV series on the other hand are produced in 12-20 hour season installments giving writers and directors ample time for building complex plots, developing interesting characters and relationship. What Marvel is doing right now is an attempt to bring just that kind of storytelling to the big screen. The Marvel Cinematic Universe films are evolving towards having a TV-series like complexity, while also being produced on multi-million dollar Hollywood blockbuster budgets.

While Thor: The Dark World is not anywhere close as awesome as The Avengers is a huge improvement over the original. Thor is still the larger-than-life hero, but now more nuanced because of his conflicting desires, and his fractured relationship with his brother. Loki comes back in style reminding everyone why he is the god of mischief, stacking misdirection, subterfuge and being all round magnificent bastard. Heimdal is even more of a badass, and you get to see exactly why Odin made him the sole guardian of the gate to Asgard.

The movie is just plain old fun. The absolute wackiness of space gods dog-fighting Dark Elves in laser powered paddle-boats is played absolutely straight without a shade of irony. The Marvel space-fantasy setting with it’s space-magic, space-elves and eldritch, space-entities older than the universe itself is embraced completely and without hesitation. The end result is an entertaining, well made spectacle with feels very right, and very Marvel. While it may seem little bit rushed at times, it definitely pumps you up for the next big crossover.


4 Responses to Thor: The Dark World