A Deepness in the Sky by Vernor Vinge

Sometimes you stumble upon a book that is well written, interesting, suspenseful, full of unexpected plot turns and reveals, and you go: “Meh…”. Don’t get me wrong – there is absolutely nothing wrong with this book. I really can’t criticize it for anything other than not being terribly mind blowing. You see, when I picked up a Vernor Vinge book I fully expected to read about post singularity future. Sadly, as if to spite me, Vinge set this book in a very pessimistic future prediction. One in which singularity never have happened – it was a failed dream, that never actually took off. People still managed to figure out how to colonize the galaxy, but they do it the old fashioned way, below the speed of light, and without aid of super-humanly intelligent machines. 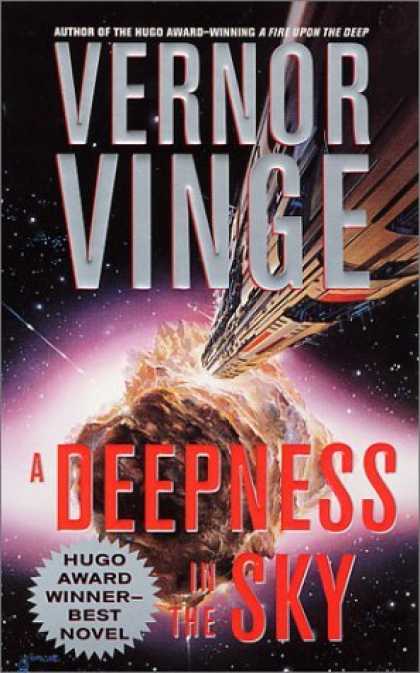 In a way, the setting of Deepness, reminds me that of House of Suns. Just like Raynolds, Vinge predicts that planetary civilizations don’t last very long. All over galaxy, empires rise and fall and then rise again rebuilding on the ruins. The only way to escape this merciless turnover of civilization is to take to the stars.

Enter the Queng Ho – a culture of interstellar tradesmen. They spend most of their lives in cold sleep, their fleets traveling for thousands of years between inhabited systems. Wherever they go, they constantly broadcast their culture ahead of them. Their tongue, is the lingua franca of all the advanced space faring civilizations. Their data banks contain close to the total sum of the human knowledge. Wherever they stop, they recruit, resupply and trade. They pick the best a given civilization has to offer – technological advances that did not arise anywhere else, unique local art, exceptional biological specimens found nowhere else, novel philosophical ideas, etc… They are archivists and knowledge seekers as much as they are traders.

Then suddenly they discover a radio broadcast of an alien origin. For the first time in the history of human-kind there is an irrefutable evidence of a technologically advanced sentient life of non-human origins. What’s even more exciting is that their signal originated from a planet so inhospitable, that it is hard to believe that life would evolve there naturally. All evidence points towards a species that colonized the world thousands of years ago, and then saw their civilization crumble and fall as it so often happens. Naturally, a number of wealthy Queng Ho families become interested in this discovery and assemble a fleet to investigate and initiate contact with the aliens.

When Queng Ho expedition arrives on site, they are not alone. A newly created star faring civilization calling itself the “Emergents” has also intercepted the alien signals, and sent their own fleet. The Emergents built up their technology based on their own archeological findings, and the ever-present Queng Ho broadcasts. Their fleet is more than a match for that of the space traders. And they have different plans for the planet-bound aliens. They are planning to invade, subjugate and exploit the newly found species while they dig deep to find the secrets of their space faring ancestors.

The book alternates between two narratives. One focuses on the brewing conflict between the Queng Ho and Emergents in the orbit. The other, focuses on the alien inhabitants of the planet itself. We see these spider-like beings through the eyes of the Queng-Ho and Emergent translators. To make the spiders and their culture more comprehensible to human minds, these specialists have developed various conventions that help them translate the clicks, whirrs and rapid leg moves into human sounding names and concepts. So a prominent spider general is named Victory Smith, and a major university town is dubbed Princeton. This is a rather cool trick that allows Vinge to develop the alien characters, give them very human-like personalities, and put them in a very human-like civilization – and then claim this is all translation bias. In fact, he often intentionally pulls away this veil and has the characters experience a shock when they see a live feed of spiders in their natural environment. A luxurious rug turns out to be revolting, organic like hairy moss. The grand spiral staircase is a winding tunnel. A distinguished night gown is an assembly of tattered rags that partially cover the spiders carapace.

It is a good read. Vinge’s philosophical digressions on the civilization turnover actually seem more mature and thought out than those of Raynolds, and his universe is actually more realistic. Plus, he hints at the idea that the failed dreams of singularity may yet be revived. The spider world holds untold secrets, some of which may hold a key to unlocking dreams that humanity long abandoned. The book is probably not going to blow your mind, but it is definitely worth checking out. If nothing else, it is notable for the little trick Vinge does to “humanize” the utterly alien spider characters. It is quite brilliant actually – write your aliens as if you were writing humans, and then claim the familiarity is due to translation bias.


4 Responses to A Deepness in the Sky by Vernor Vinge