When I read Accelerando I concluded that Charlie Stross is a master of putting a staggering number of cool ideas on every single page of his novel. The density of ideas per page in that book was so great it was approaching weapons grade quality. I don’t think anyone could match him at this game. Until now. I think I have found a worthy contender – polish Science Fiction writer Jacek Dukaj. His novel Perfect Imperfection has a similar “holly shit, this book is epic” quality to it.

That said, I am little torn writing about it, because I know it will be inaccessible to about 90% of my readers. You see, there is currently no English version of the book. It is only available in Polish, which means most of you won’t be able to read it. So reviewing it here makes little sense. On the other hand, perhaps writing about it in English to generate some buzz amongst English speaking SF enthusiasts may be constructive. 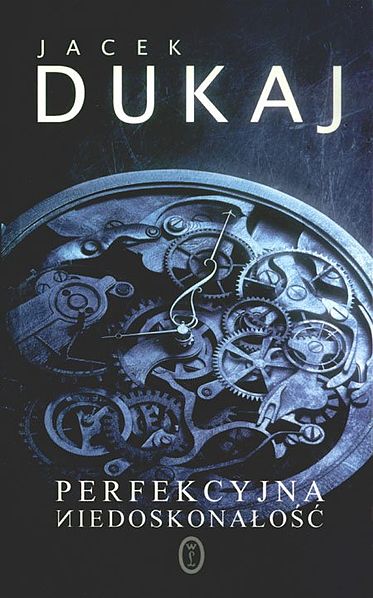 The story goes a little bit like this: Adam Zamoysky, a 21st century astronaut is recovering from a failed mission that left him and his crew adrift in deep space for over 600 years. Everyone on board was dead when the vessel was discovered, but Zamoysky’s body was surprisingly well preserved in the cryo pod. The more interesting detail is that his DNA did not match any original crew member, nor does his name and records exist in any archival documents preserved by various space agencies. He is a mystery – man who has never existed. A wealthy and influential tycoon Judas McPherson takes an interest in Zamoysky and decides to resurrect him. Just scanning his neural connections does not necessarily give you a key to all of his memories – it is basically just a state vector, and there is data loss on account of the subject being dead. So to see what happens you have to take that data, and run it. The most efficient way to do this of course would be to run him as a virtual simulation – or better yet few hundred of parallel simulations, weeding out the ones that are not spilling the beans or can’t recover past memories. But since McPherson is a Stahs (Standard Homo Sapiens) of the First Tradition (no wetware implants, no spawning new instances of yourself, no genetic manipulation – his tradition only allows him to do basic backups Cory Doctorow’s Bitchun society style) he decides to do it the old-fashioned way – by giving Zamoysky a biological body and existence in physical world.

Initially the astronaut’s reality is being filtered, to spare him future shock. A dedicated AI simply edits out anything that would be out of place in a 21st century setting. This way Zamoysky can interact with McPherson and his guests without breaking the illusion that he is back in his own time. Fortunately (or unfortunately – depending how you look at it) the filtering AI is damaged during a failed assassination attempt. Suddenly Zamoysky is hit with a whole load of band news. For one, he died. Two, he never seems to have existed. Three, he is technically a property of the McPherson family. Four, it is a 29th century and singularity came and went, changing the world beyond recognition. Five, someone rich, powerful and influential wants him dead. Six, McPherson just recovered a fragmentary message from his time well that says that a big war is coming, a Zamoysky’s is somehow implicated in that conflict.

McPherson tasks one of his daughters (also a Stahs of First Tradition) with stashing the poor, future shocked astronaut somewhere safe and away from civilization and wait out the storm. So Angelica McPherson – a young girl who at her Father’s request spent most of her childhood at a Jesuit mission in ass-end of Affrica hunting elephants and getting groomed to be a cog in the McPherson business machine becomes Zamoysky’s guide to the future. Ironically, the blast-from-the-past protagonist is more augmented than his companion who was born into a world of high technology. The wetware circuitry that was used to hook him up to the reality filters also gives him access to HS plateau (post singularity version of internet) and virtually manifest anywhere in the HS civilization. Now he has to piece together his shattered memories, figure out why everyone in the known universe wants to get at them while at the same time trying to find himself in this new reality.

Dukaj is full of interesting ideas, and his post singularity future is equally awesome but starkly different from Charlie Stross’ vision. Stross predicts that a logical way for a civilization like ours to evolve is to disassemble our solar system to build a Matrioshka brain to satisfy our ever growing computational needs. He sees baseline humans being marginalized, and forced out to live their lives out exploring deep space or huddling around brown dwarfs while artificial minds stay in their computational grids around yellow stars. Dukaj has a slightly different idea. What if we didn’t have to build Matrioshka brains? Why if we could figure out a way to bend time-space continuum in just the right way to create a pocket dimension that is described by a slightly different (reduced) set of physical constants. What if we could optimize these universes for data transfer speeds, storage efficiency, etc… Well, then we would not need to build Matrioshka brains – we could just use these pocket universes to create incredibly powerful computational devices that are not bound by laws of physics of this universe and take no physical space. Dukaj dubs these contraptions “inclusions” with the “ultimate inclusion” being a theoretical bee-all-end-all pocket universe that could not be optimized or improved upon.

Plateau – the above mentioned hyper-internet is one of such inclusions, optimized in such a way that data transfer to and from it is constant, regardless of where you are located in the physical universe. Zamoysky’s reality filter was another inclusion – one designed to host the hardware for a sophisticated AI. Sol Port is another one – an inclusion that engulfs the entire solar system making it impossible for anyone or anything to go in or out without proper authorization.

Secondly, Dukaj envisions a future in which standard baseline humans can peacefully co-exist with god-like AI constructs. How? Civilization. In Dukaj’s universe civilization is actually a concise term that describes a community of sentient beings voluntarily choosing to abide by an arbitrary set of laws, rules and regulations. The HS civilization is built as a stratified society in which those who choose to be un-augmented are protected from those superior to them. The authority lies with an inclusion known as “The Emperor” who controls all the plateau resources and all nano-clouds within the bounds of the civilization. If you want to store your data on HS Plateau or manifest yourself in the physical form somewhere in HS space, you simply lease resources or nano from the Emperor, who can swiftly rescind them if you break the law. Of course if you are a super bright post-human or AI who thinks that baseline Stahs is scum of the earth to be squashed, you can simply leave HS Civilization and apply for residence in another one. On the other hand, if you are a Stahs and you want to do business with higher intelligences you can use the Emperor as the mediator, interpreter or ask him to give you access to powerful slaved AI’s that can crunch data, and do projections and advise you on strategies.

Dukaj has interesting take on post-humanism, both as a state of being and as a process. If you recall Accellerando, even though Manfred Macx was a futurist and trans-humanist he was hesitant to augment himself past certain limits. Stross pretty much drew a line in sand and said: up to here, you are human and if you rewire yourself further you will become something both incomprehensible, inhuman and frightening. Dukaj is very aware of this problem, but in his universe there is no line – there is a blurred spectrum of humanity. Yes, if you continue augmenting yourself for pure performance you may eventually lose track of your humanity. On the other hand, constructs such as the HS Civilization serve as a convenient anchor for super-bright post humans or AI gods. Since they must sometimes do business with Stahs they must keep some vestiges of humanity to be able to empathize and comprehend them.

Actually, to discuss this, I need to show you something. This here, is Remy’s curve: 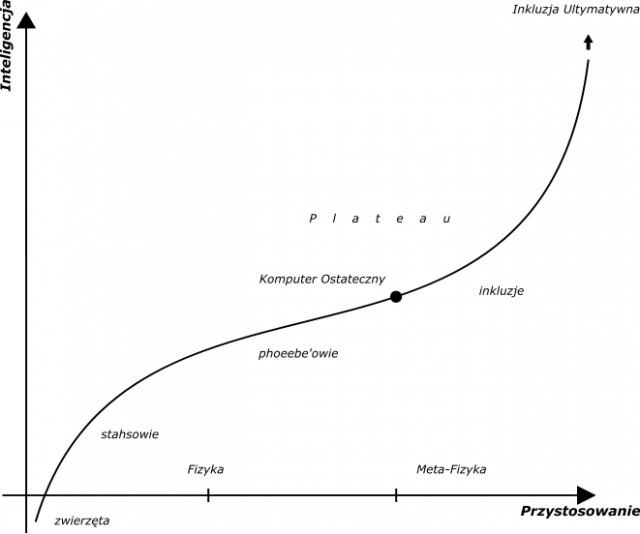 That big dot in the middle is the ultimate computer – best possible quantum computing machine that can be made in our universe. Below it are augmented, multi-threaded post-humans, and Stahs’ of various traditions. Above it lie intelligences that run on hardware that can exist only in various optimized inclusions – leading all the way up to the ultimate inclusion, and the god-of-all-gods intelligence that would inhabit it. Dukaj theorizes that without a social construct such as the HS Civilization, most individuals and societies will naturally push up the curve at a break-neck pace. The curve has a seductive pull that is hard to resist. To wit, Zamoysky who has started as a relic from the past, makes several strides up the curve throughout the novel, without even noticing. First, when he learns how to use plateau to manifest himself in a different part of the universe by leasing Emperors nano to form a physical body he can control. Then, when he splits himself into two parallel threads because the situation requires him to be in two places at the same time. It is easy, effortless and rewarding. The question is when do you stop, and how do you know you went to far.

This is why the Civilization protects those who choose to live as a Stahs. To refuse the pull of the curve, and choose to live slow analog life in a digital world is seen as somewhat noble pursuit. Shahs’ maintain the baseline of humanity against which higher intelligences can calibrate themselves. Without them the post humans and AI’s could easily, unintentionally lose sight of what it means to be human.

Anyways, it is an excellent book, full of great ideas and interesting musings. It is smart, well researched and well written post-singularity science fiction. If you speak Polish, I could not recommend it enough. If not… Well, you could potentially email his publisher and ask if there is an English translation in the works… Though I’m not exactly sure how that works – I guess they only handle his publishing in Poland, so for an English version to coalesce into existence there would probably need to be some involvement from a US publisher who would be willing to distribute the book on this side of the pond, or something.