Posted on November 18, 2011 by Luke Maciak   tein.co/10494
Taja Grimm’s World has a rather interesting pedigree. It started as a short story titled Grimm’s Story which Vinge published some time in the early 60’s. In 1968 he expanded it into a novella format, renamed it to Grimm’s World and re-published published in the fourth book of the Orbit anthology series. In 1986 he briefly revisited the same universe, publishing a loosely connected prequel The Barbarian Pricess in Analog Science Fiction and Fact magazine. In 1987 Baen Books became interested in these two stories if Vinge would combine them together, and expand them into a full length novel. Not willing to turn away a lucrative publishing deal, the author did exactly that. And so we, the readers got ourselves a book that was expanded and re-hashed and padded for length not once, not twice, but three separate times. I can’t really blame Vinge for this – after all a man has to eat. But I wish someone told me about this before I bought the book. Instead I was swayed by the back-cover blurb which reads something like this:

As a mud-spattered youngster, Tatja quickly realized she was different from the stone-age primitives with whom she grew up. Her insatiable curiosity and thirst for knowledge could not be quenched among them; she had to explore and learn more about the strange world she lived on.

She finds the bastion of all culture, arts, entertainment and history for the entire planet, the seven-hundred-year-old science fiction magazine Fantasie, which is produced entirely aboard a gargantuan floating vessel the size of a small city. But despite the printing presses, sail-powered vessels, and mind-expanding technology, Tatja is still dissatisfied. Rising through the ranks, she finds that the people on the enormous barge are just as unintelligent as the primitives she grew up with. But others have come to the planet who not only challenge her intelligence, but offer her a tantalizing opportunity to uncover answers to mysteries that have long plagued her.

A super-bright girl from a low-tech culture thrown into a high tech environment grows up to realize people she idolized are idiots and eventually uncovers the truth about her world being a lost colony? Add to cart, shut up and take my money Amazon! 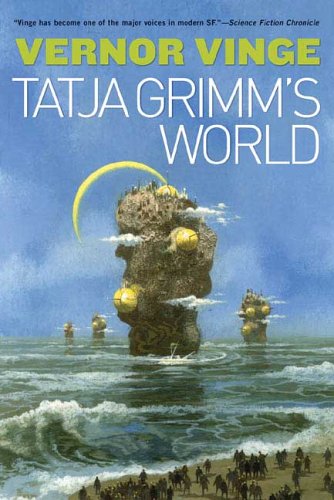 Alas, the blurb is better than the book. I was really looking forward to reading the thoughts and reflections of this Taja character because I have soft spot for this archetype. I can’t easily relate to military gruff types, special agents, cops or space marines – but a bright youngster with a knack for technology, stuck in a world populated by semi-literate neanderthals with minds slow like molasses – that’s the story of my life. Taja was going to be my avatar – the freak, the outsider, the weirdo with the head full of ideas her peers won’t be able to grasp for decades. Unfortunately Taja is not a PoV character. Even though the book is about her, Vinge bends over backwards to avoid writing from her perspective. Instead he alternates between several protagonists (a magazine editor, a publisher and a young astronomer) all of whom end up fawning all over the barbarian girl in one way or another. I guess Vinge did this to make Taja seem strange, alien and aloof, but it doesn’t really work that well. She ends up seeming like a classical Cannon Sue – she is this near omnipotent mastermind, being able to hatch unreasonably complex plans that the readers are not privy too. When it is time for the big reveal, it always turns out Taja was six steps ahead of the game, factoring random chance happenings, and complex failures into her calculations – because she is just tat smart.

It is also very clear that Vinge didn’t really take much time and effort to merge the short story prequel and the novella proper. It’s almost as they were combined via the means of an editorial Swingline stapler. About a third of the way through the book, the story abruptly jumps a decade into the future. The main PoV character who was relaying the story of young barbarian princess vanishes and the book introduces a brand new protagonist. Apparently the erstwhile editor from the beginning of the book had some irreconcilable differences with Taja and left. We only know this because one of the characters mentions it as an afterthought. If you don’t know that the book was spliced together from two sources, you are left wondering if you somehow skipped a few chapters. I actually checked to see if my page numbers are consecutive, wondering if my copy was a fluke missprint without a dozen of pages. But no – it’s just that the the seams where two stories were sewn together are showing.

It only gets worse from there. The alien contact mentioned in the blurb I quoted above is beyond cliche. This might be a bit of a spoiler, but Taja meets an alien dude who claims to be a space cop of sorts. He is chasing another alien dude who is a space criminal, working for space slave trading cartel – but not everyone believes his story. I will let you guess what kind of twist Vinge has cooked up for the readers when Taja finally meets the second alien. And no, it is not surprising or original.

That said, if you are a fan of Vinge it might be worth picking up this title. When I was reading it, I could not help but draw parallels between Taja Grimm’s World and A Deepness in the Sky. It shows that the ideas that resulted in the awesome story about space traders and intelligent spiders were germinating in the author’s mind ever since the early 60’s. Taja’s story is almost like an early test run for these concepts. Don’t believe me? Lets talk about similarities:

For me, reading Taja Grimm’s World was basically an exercise in spotting parallels to a much better book. It is almost like reading a very, very early draft of Deepness – a rare look behind the scenes and into the authors mind. It contains threads of ideas that percolated, and matured into something else entirely. And as such it is a fascinating piece of literary history for any Vinge fan. But if you just want a good book, I would recommend staying away.


One Response to Tatja Grimm’s World by Vernor Vinge