A Fire Upon the Deep by Vernor Vinge

I like most of the novels written by Vernor Vinge (well, with exception of Taja Grimm’s World). I thought Rainbow’s End was inspired, and that Deepness in the Sky was a really solid piece of SF. Fire Upon the Deep is a book I really have mixed feelings about.

For one, I really don’t buy the whole “Zones of Thought” idea. Vinge postulates that Earth is in a band of space known as the “Slow Zone” where nothing can move faster than light. Outside that zone however lies “Beyond” where rules of physics relax and FTL travel is not only possible, but also inexpensive – an area of space just bristling with life. Thousands of sentient races live together in a space opera like setting, exchanging information using a galaxy wide internet equivalent. On the outskirts of the beyond – at the very edge of the galaxy lies The Transcend. It is a magical zone where almost anything is possible. It is a domain of AI-gods and post singularity intellects. 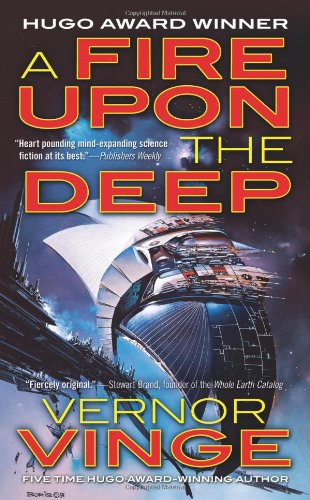 A Fire Upon the Deep

It is a neat idea that creates a stratified ecosystem in which baseline sentient species and transcendent powers can live side by side without much interference. It neatly explains why the higher intelligences don’t simply assimilate, absorb, wipe out or kick out humanity from their domain. A little too neatly for my taste. Vinge never explains why the Zones exist, or how exactly do they work. They’re just there, and we were supposed to accept them. This is fine, but I grew accustomed to explanations better than this. I have seen the “physics don’t work the same everywhere” done much better by Neal Stephenson in Anathem or by Jacek Dukaj in Perfect Imperfection. Both books used concepts of alternate dimensions, which at least have some basis in the string theory. Vinge’s Zones are mostly magic – they have no scientific basis – or at the very list, the author did not demonstrate such in his writing. I like hard SF and this is a lazy solution.

I’m also not a big fan of universes bristling with alien life, Star Wars style. Perhaps I’m a pessimist but I find space civilization with little or no aliens more compelling than ones that invent throw away critters as a minor joke. Vinge for example creates a race of fuzzy, cute Care Bear butterflies that turn out to be a ruthless, violent warrior race. Ugh…

Finally, I absolutely abhor when an author transplants their favorite Marry Sue character between settings for the sole purpose of having a cool protagonist. Guess who shows up in this book? Motherfucking Pham Nuwen from A Deepness in the Sky. Actually, this is incorrect. Vinge wrote Fire before Deepness, but you wouldn’t know that without looking it up.

In Deepness Pham Nuwen has a purpose. I liked him as a character in that book. Actually “liked” is a strong word. He was not particularly likeable, but he was a compelling character with a strong arc. I really liked the fact that Nuwen could be as cold, calculating and ruthless as the main antagonist Thomas Nau. I liked how his arc culminated in a really interesting choice: to become same monster as his adversary or to give up on his dream of creating an interstellar empire.

In Fire Upon the Deep he seems out of place. I guess he is supposed to act as a fish out of water character. A human from the slow zone, through whom the readers explore the Beyond. But then Vinge gives hims superpowers – shards of knowledge bestowed upon him by a transcendent intellect. So throughout the book Nuwen acts mostly as a plot device dispenser. Whenever there is trouble he falls back on his “godshatter” knowledge, and does something random – and soon enough it turns out his random action was perfectly timed stroke of brilliance that was just the thing to get everyone out of the bind. In the end he ends up looking like a an author’s favorite character that was just borrowed, and forcefully inserted into new continuity. This is not the case, but that’s how it looks like. It was somewhat painful to read.

Did I hate the book though? Nope. I actually liked parts of it. The parts that take place on Tines World. You see, Pham Nuwen is part of a rescue mission sent from the Beyond to the very edge of the slow zone. A ship carrying an extremely important McGuffin crashed there, leaving the entire crew stranded on a planet that just recently reached medieval level of technology. What’s so interesting about this backward world? It’s the aliens that inhabit it.

In my review of Embassytown I have complained about Vinge’s entirely too human aliens in A Deepnes in the Sky. I felt that the spiders were not sufficiently different from us – both culturally and psychologically. I guess this was part of Vinge’s point – he wanted to play with the idea of having the human crews listen to translated radio broadcasts and developing attachments to spider politicians and celebrities only to suffer from extreme cognitive dissonance when seeing these frightening monstrous looking creatures in person for the first time. Unfortunately humanizing them, made them less interesting.

The aliens from Fire Upon the Deep are portrayed in the same way – very human and unremarkable – with the exception of the Tines. They are interesting, because they are unique. They are pack minds – only sentient in groups of 4-8 members. The individual members of the species are somewhat intelligent, but not self aware and not capable of rational thought. Their behavior is mostly animalistic and driven by instinct. But when a group gets together it can attain consciousness. The individual members communicate with each other via sound – they emit constant buzzing that allows the members to coordinate, and think as a single unit.

Most packs are mixed age and mixed gender. When breeding female members usually keep the young and raise them to become new members. The children learn the parent’s internal thought “language” by constant exposure and become part of the pack mind. Because of this, individuals that could be labeled as “children” by our standards are rare – most packs incorporate new young members as their oldest ones die off and thus their age average fluctuates.

In theory a pack mind can live forever as long as the new members can absorb and store memories of the dying ones. In practice however, new members often change the overall personality of the pack. A short tempered member may cause the pack to become quicker to anger, while a member with better logical faculties may produce a more analytical and scientifically minded pack. To reflect this, most Tines have two names: one which is simple concatenation of the names of the members, and another chosen name that represents the “soul” of the pack.

As you can imagine a species with a distributed intelligence like this must have some interesting philosophical insights on what exactly makes one sentience. We humans have been pondering what makes us human for ages, but imagine the theological and philosophical discussions that a species which can tangibly identify a “soul” or “essence” of an individual must be having. Vinge really digs deep into this, showing you how these creatures think and how they view themselves. For example, many practice selective breeding (including inbreeding inside one’s own pack) in order to produce offspring that inherits just the right mix of traits to positively impact the personality and abilities of the pack. Others practice “soul surgery” – an unethical, and trauma inducing practice of killing and replacing undesirable members.

Overall, the book is average. It’s a McGuffin driven space opera with a Cannon Sue protagonist. Every time the action switched to Pham Nuwen and his crew my eyes would start to roll. But the bits of the book that take place on Tines World are quite decent. The aliens are interesting, the two child protagonists are rather compelling. The relationship between Johanna and Peregrine for example is handled very well – starting as bitter enemies only to become fast friends. The deal between Jefri and Mr. Steel on the other hand is very reminiscent of the Thomas Nau – Qiwi Lisolet situation. Vinge clearly reused it, but also managed to polish and improve it in his later novel. For the most part though, this setup works.

It is not a bad book. Deepnes in the Sky has a better story and better characters, but weaker aliens. If you find space opera jarring, you may want to skip this one.


4 Responses to A Fire Upon the Deep by Vernor Vinge