Posted on December 9, 2011 by Luke Maciak   tein.co/10811
It’s not often that I am unable to finish a book. I am a book worm by nature – I devour printed volumes wholesale not unlike Sam Savage’s Firmin. Good, bad – it does not really matter. So far there was only one book that I was unable to finish. It was Only Revolutions by Mark Danielewski and it simply proved to be completely incomprehensible exercise in troll typography. I am convinced that the author composed this complex masterpiece of incoherent drivel to fuck with his publisher. Not that incoherent is bad, mind you. For example, I absolutely loved VALIS which was more or less a Philip K. Dick’s self indulged chronicle of a drug induced religious revelation, and the schizophrenic paranoid fit that followed it. A book with a nonsensical plot and a narrator who is not even sure which of the characters of his story is him. But it was a book filled to the brim with ideas. And if you feed me a steady diet of high brow concepts, I won’t mind that there is barely any plot or characters in your novel. That’s just how I am.

The Orange Eats Creeps by Grace Krilanovich is a book entirely devoid of plot, characters and ideas. You turn the pages, you read the words but nothing really comes out of it. Granted, it is not as bad as Only Revolutions which seemed to be a book about arranging words so that yellow and green O’s make pretty patterns on each page. Unlike Danielewski, Krilanovich actually writes in coherent sentences that can be parsed and understood. Unfortunately these sentences, while perfectly comprehensible on their own, never add up into any sort of narrative that can be followed. Actually scratch that – they do. There is a narrative in there, it just meanders and spins in circles never actually saying anything. 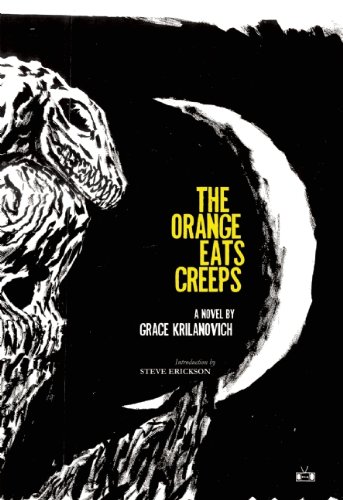 The book is written in a stream of consciousness style from a perspective of a teenage runaway, living a nomadic hobo lifestyle with bunch of 20-something hipster junkies. They travel together by jumping onto freight cars, sleep in abandoned houses, junkyards, crack houses and woodside enclaves of homeless and downtrodden social rejects. They steal, rob people, prostitute themselves for food and drugs. Mostly though they just pass time. The narrator tends to be high most of the time, so her sense of what is real and what is not seems to ebb and flow. Sometimes she will go on for four pages about what she did in seven-eleven – which magazines she browsed, what did she put on her hotdog, how did the coffee taste, etc. The next six pages will be about how she can taste other people’s memories, or about catching glimpses of her long lost foster-sister who maybe-died sometime ago. You know – the usual junkie drivel that makes no sense, but on meth it does.

The back-cover blurb makes a big deal about it being story about “hobo junkie vampires” but pay it no heed. Krilanovich is just being coy, tailoring her metaphors for the literary fashion of the season. Vampires are in vogue. Vampires sell books. Publishers love to plaster vampire shit all over the covers. And while Krilanovich talks about her characters being literal vampires – ones that drink blood, and sleep during the day – this claim has little to no meaning, seeing how the novel is just one long hallucinatory acid trip. The kids she describes are social parasites – that’s what they are. But they become blood suckers because her narrator has tenuous grip on reality and loves to talk in metaphors. Metaphors, pointless musings, random wordplay and nonsensical segues into looping set pieces that repeat throughout the narrative, with alternating cast of characters.

Characters who never coalesce into actual people you could care about. At about halfway through the book, I managed to figured out that the protagonist tagged along with Seth, Josh and Knowles but I’d be damned if I could tell you which one was which. The first one seemed to be the “boyfriend” of sorts, who sometimes makes decisions for the group, and the other two are his posse. They are all background noise though. They do things, and the narrators observes their doing, but with a great deal of disinterest. Most of the time she is to busy spinning yarns of crazy in her head to fully pay attention to her compatriots. They are just there, and if they start moving, she follows in tow. And if they want to fuck, then maybe she fucks them, unless he happens to be thinking/hallucinating about her dead-now-undead-now-dead-again heisenbergian not-really-but-maybe sister. Then she just claws at their faces without warning, forgetting they do not posses her ability to read minds through sweat pores.

Together these non-friends, non-lovers mostly just hang out and do nothing. They raid convenience stores, sleep in open cars, go to free concerts, eat from trashcans and talk about things the narrator loses interest in halfway through the sentence. Then she wonders about her non-parents, non-siblings and makes incoherently wild theories about the nature of her hallucinations. Everything is fuzzy, out of focus and obscured by a haze of shoplifted robotusin. You can skip ten pages ahead and the narrative will still flow about as coherently as before. You wait for things to happen, but nothing ever does.

Before you tell me I just don’t get it, trust me I do. I know what Krilanovich is trying to say. I know she is trying to be existential. I know that the maybe-dead maybe-sister is an over-spun metaphor the protagonist unknowingly losing a piece of herself. I know the narration is an experimental jaunt into modern lyricism wrapped in the trappings of youth culture slang. My problem is that I don’t care. Krilanovich failed to make me care about the things she was saying. Her style is flashy, her vocabulary is colorful, and the way she strings sentences together can be lovely but she fails at the basic task of storytelling. There is no plot, no characters, no story arc and no interesting concepts to hold your attention. The entire thing is just a meandering vapor of gut feelings, motions and emotions that amount to nothing concrete in particular. It’s an equivalent of a music video that tries to tell a story that has nothing to do with the underlying lyrics, but also makes little sense on it’s own.

Granted, if you have been a sheltered suburbanite who has never encountered nomadic junkies circling the drain of oblivion, then this may be an eye opening experience. Or perhaps if you are a practicing, or recovering member of that particular train-skipping hipster demographic the book may touch a nerve or bring back fond memories of nomadic exploits. For me though, it was a book about people I despise, doing profoundly boring things. Honestly, I couldn’t give two shits about these kids, their music, and their lifestyle. Theirs is the shit I want nothing to do with. And perhaps that’s my problem. Perhaps I don’t have the proper distance to appreciate Krilanovich’s attempt to capture, bottle and sell the essence of hobo hipsterism.

You will see a lot of rave reviews for this novel out there. Take them with a grain of salt. The book is interesting as a literary experiment, and it’s themes may be fascinating to some. Give it a few decades on a bookshelf, and it will probably age like a bottle of cheep wine. Some reputable literary critic will probably fall in love with and claim it glamorously captures the trials and tribulations of the mundane life of early twenty first century hipsters. I wasn’t impressed with it.

This entry was posted in literature and tagged review. Bookmark the permalink.


2 Responses to The Orange Eats Creeps