One of the things I got for Chrismas this year was Apple’s Magic Mouse. It is one of these devices that I sort of coveted, but wouldn’t actually buy myself due to the price tag, and the entire buttonless setup. As you may or may not know, I am a big fan of big and bulky mice. I’m currently using Microsoft Sidewinder on my desktop and loving it. It is a solid five button contraption with a hardware sensitivity switch, and a side loaded set of weights that lets you experiment with friction and inertia coefficients. I consider this, along with the analogous Logitech offerings to be a real man’s mouse. No scratch that – let’s not be sexist here. It’s a mouse for a discerning customer, a hacker who wants solid, reliable and configurable hardware.

Magic Mouse is none of that. It is a rather flimsy and decorative. It really looks nice next to my laptop, but it is in no way as sturdy and dependable as my trusty Sidewinder. 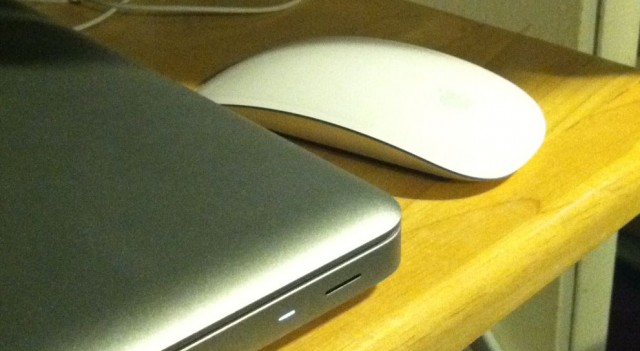 The Magic Mouse really looks nice next to a MBP

So why did I want one? Because it really does fit with my laptop. You see, my MBP is my untethered mobile workstation. When I’m at home and at my desk I usually work on my desktop because nothing beats the comfort of a 24″ monitor, a sidewinder mouse and the Microsoft Ergonomic Keyboard 4000. But when I want to work or browse the web while on the road, I want to travel light. I don’t want to be burdened by too many cords, USB dongles and other optional plug-in devices. Magic Mouse works on Bluetooth which makes it perfect fit.

Not only that, it is also a multi-touch device. One of the things I really enjoy while working under OSX are the built in touch-pad gestures. I love the two finger sideways swap that gets me to a clean workspace for example. These sort of things became part of my workflow on a Mac, but the touchpad only gets you so far. If you are working on a flat surface like a desk, it really helps to have a mouse handy – and I wanted a mouse that would let me preserve at least some of the gestures I have learned to love.

Hence, Magic Mouse – not something that I would normally buy, but something that did fit a specific set of mobility related needs. How do I like it so far? It’s not bad actually.

One thing that does bother me a bit is the lack of haptic feedback. The mouse does “click” as a mouse should – that’s not the problem. If you wanted to use it as a standard “Apple Mouse” that sports a single button, it would be perfect. But I’m a power user, and a single button is not enough for me. Fortunately, Apple knows that you can’t force people to work with single button devices – they will find ways around it. So in modern versions of OSX you can actually turn the second button click straight from System Preferences: 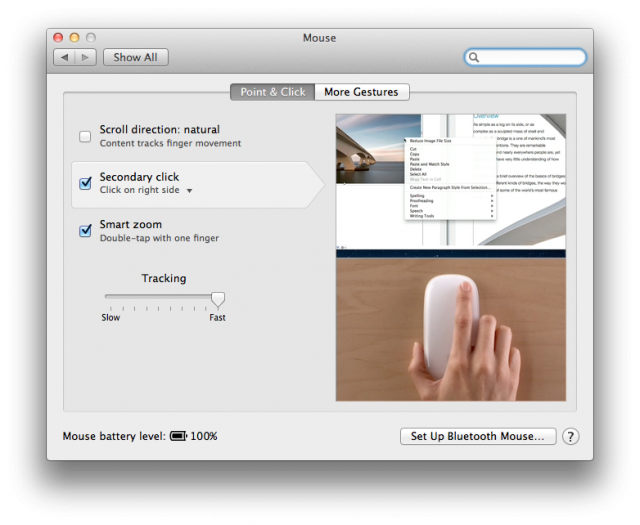 This works very well. I’ve been using the mouse for several days now, and I have never had a mistaken click situation – left always registers as left, and right always registers as right. It just work. But, alas – I am lost without a middle button. Sadly, Apple has not acknowledged the existence or need for such an input methodology yet. Perhaps that feature will ship with Snow Lion, or whatever the next release of OSX will be called.

Sometimes I wonder how other mac users browse the web without a ubiquitous middle click? On the touch-pad I ended up installing a nifty app called Magic Prefs which allowed me to configure a three-finger-click as middle mouse. Since that app was already running on my machine, I used it to add a similar feature to my Magic Mouse: 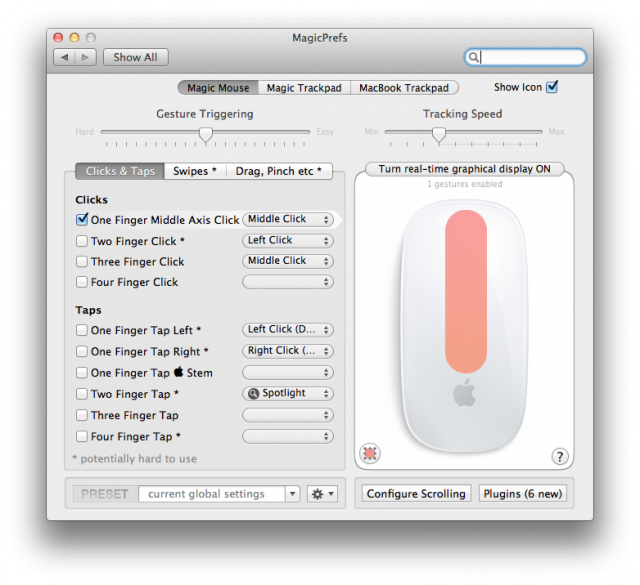 How I add middle click to my Magic Mouse

I found that three-finger-click is not comfortable on the small frame of a Magic Mouse, so instead I opted for a gesture that can only be called a “long-finger-click”. I think the picture above explains it quite well – it involves laying down your finger along the vertical axis of the mouse – which I find is exactly what my hand wants to do when I decide to middle-click.

Unfortunately, the detection of this gesture is a bit iffy. Part of it might be the software implementation – if Apple acknowledged middle-click as a valid user need they could probably devise a very tight detection with wide margin of error for this gesture. Built in OS features tend to be much more streamlined and tested than third party apps. Still, the other part of the equation is the lack of aforementioned haptic feedback. On my Sidewinder the middle click is effortless because the mouse wheel is big, metallic and textured (for better grip). Magic mouse has a glassy surface, and you have to more or less guess where to place your finger. It is not a hardware problem – it is a design paradigm issue that he are yet to solve.

Would I recommend this mouse to someone else? It depends. If you have a MacBook, and you want a portable, wire/dongle free device that will just work and let you combine the touch gestures with a flexibility of a mouse then yeah – it is a good pick. If you are running Windows I’d probably stay clear. Multi-touch under Windows tends to be as wonky as Bluetooth mouse support.

This entry was posted in technology and tagged gadgets, hardware, review. Bookmark the permalink.