As you may know, I got the Microsoft Sidewinder Mouse for Christmas. Ever since I inherited Logitech VX Revolution at work I caught the fancy mouse bug. I figured that since I spend inordinate amounts of time at my computer, I might as well have high quality mouse and keyboard. So Sidewinder and Logitech G9 ended up on my list. 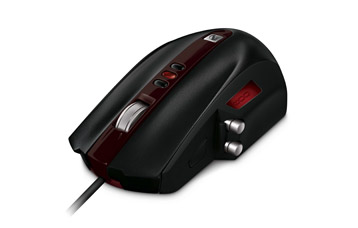 Sidewinder is a very nice mouse, but I have one small complaint. It’s a little bit to long. I don’t know – maybe I have small hands or perhaps I’m just used to smaller mice but something, but if I loosely grip it I can barely reach the scroll wheel and the thumb buttons. I never actually had this problem with any mouse before. In fact when I unpacked it at the Christmas table several people remarked that it was a little on the large side. So it’s not just me.

By my calculation, if they shaved off a half an inch it would be a perfect fit. I’m not saying it’s uncomfortable – it’s just that it gets some getting used to it – and I usually have to slightly shift my hand to go from using the scroll wheel to reach the thumb buttons unless I grip it just right. 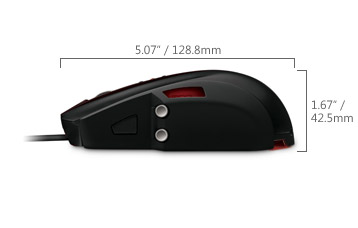 First thing you notice when you get this mouse is the set of weights and spare sliders that come in the box with it. Sidewinder ships with three 10 gram weights and one 5 gram weight that you can use to give it just the right feel. You can easily add up to 30 grams of weight to the device just by pulling the snap in attachment and placing appropriate weights in the 3 available slots. I experimented with different setups and the max weight seemed a bit to much. I currently have 5 gram inside and it feels about right, but I’m still messing around with it. The difference is very subtle, but it’s nice to have that fine degree of control over the way your mouse glides. It almost makes up for the unusual length. 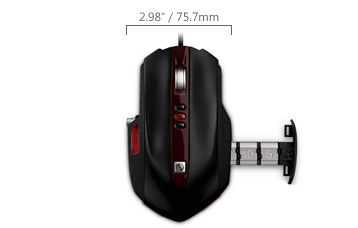 Another striking feature of this mouse is the LED which actually works. It usually displays your current sensitivity setting. By default you can switch between 2000 dpi, 800 dpi and 400 dpi settings using the 3 buttons on the top of the mouse. On the highest setting is perfect if you need to move your mouse from edge to edge in quick strokes. In this mode you hardly ever need to pick up the mouse but it’s easy to overshoot your targets. On the lowest setting you get slow deliberate movements. This mode is great for work requiring accuracy – for example retouching images pixel by pixel on high zoom setting.

I upped the middle mode up to 1000 dpi using the Intelisense software, and here is the kicker: the mouse detected that change and displays the correct dpi value as configured in software. Awesome!

The extra buttons are great. The dpi switches are easily accessible right below the scroll wheel. However, they are positioned in such a way that it is almost impossible to hit them by accident. The thumb buttons are perfect. I hardly ever use the thumb buttons on my VX Revolution because of the weird position. In Sidewinder they are easy to find even without looking, and they give you a pleasant click when you press them.

All the buttons are configurable with the Intelisense software which can be conveniently called up using the Sidewinder logo button located on the “butt” of the mouse. It’s funny, since your hand is usually resting on top of that button, but it is virtually impossible to depress it with your palm or ball of your hand. The configuration screen is very simple and intuitive: 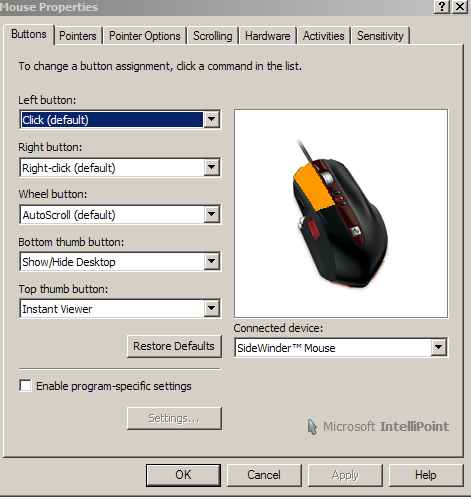 You can reconfigure actions for all 5 standard buttons and the scroll wheel. The sensitivity switches and the logo button can’t be reset, but I don’t think I would want to do that anyway. There are plenty of presets to choose from – ranging from the usual back and forward browser keys to fancy built in features such as the Instant Viewer which is a poor man’s Expose clone:

If you don’t like any of the preset options you can us the macro feature which lets you bind a given button to a series of actions. You can essentially configure any chain of keystrokes, with pauses, modifiers and etc. The macro editor is pretty straightforward and user friendly: 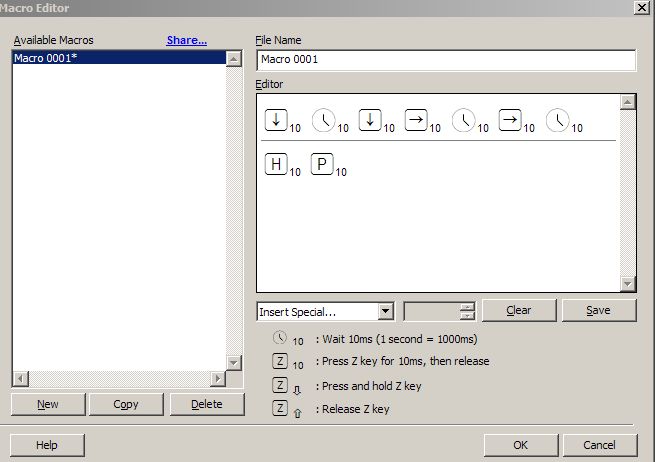 What is even better is that you can configure buttons on a per-application basis. This is great news for me as a gamer since I can bind the thumb buttons to different key combinations for every game. In fact, the Sidewinder promo materials tout it as the ultimate gaming mouse and the brochure included in the box talks at length about the “Quick Turn” feature. Naturally it doesn’t work out of the box – you actually have to choose on the intelisense config screen before you start the game. Then, you have to configure it in the game by pressing and holding the bound button, and doing 360 degree turn. Once you do that and release the button a quick stroke will do a half turn which should swing you around 180 degrees. It’s a nice feature but nothing spectacular.

One thing that really seemed odd to me was that the drivers were not included in the box – I actually had to go and download them from the MS site. The mouse worked fine out of the box on WinXP but there was no way to really configure the extra buttons or change the dpi presets.

Here is a show stopper though – when my machine crashed and I booted Knoppix the sidewinder went completely dead. I had to switch back to my old Microsoft Optical USB Mouse to actually back up my data. Of course this was an older (last year or so) Knoppix release so maybe things have improved. I haven’t tried this mouse with Ubuntu or any recent live CD yet. But be warned – Sidewinder is not really a standard mouse and Linux support might be spotty. If you are a Linux user I would probably recommend one of the fancy Logitech mice that is supported by the Btnx package.

Would I recommend it? Yes, it’s a great mouse. If you have big hands, you are going to fucking love this one my friend. If not, you will still appreciate the slick design, the weight system, the dpi switching and the great tactile response you get from the thumb buttons and the scroll wheel. The size is really not a huge issue, and I hardly even notice it anymore. So yes, I think it’s money well spent – unless you are a linux user, a person with very small hands/short fingers or a lefty. It’s actually not the worst mouse to use left handed (it doesn’t have that heavy slant and profiled thumb groove like some other mice) but the thumb buttons are hard to press with your pinky.