In the past two months, I have written close to 6 thousand words (give or take a few hundred) about Skyrim. I talked just about everything – my first impressions, my likes and dislikes of the new system, personal anecdotes from my travels and the radiant quest system. Alas, I haven’t mentioned the thing that is usually supremely important to me in a game: storytelling.

I always have mixed feelings about Bethesda writing. On one hand, their Elder Scrolls universe is one of the most fleshed out, interesting and vibrant video game settings out there. There are whole wiki pages out there devoted to compiling, and cross referencing the huge amount of background lore from the five (or is it six?) Elder Scroll games. It is one of the very few fictional game worlds in which there exist named poets, scholars and artist about whom you learn through their works and artifacts. Bethesda is excellent at world building. You would be hard pressed to find another setting with so much accumulated lore and background fluff. The only thing that compares here are the Warhammer and Star Wars universes.

On the other hand, they have a bad track record for writing compelling narratives that involve the player. Excellent example of this is the Fallout 3 main quest, which is so full of plot holes that your suspension of disbelief falls right trough them. It is so bad, that if it was ever weaponized, it would very likely violate the Geneva convention.

I feel that I really can’t close the book on Skyring until I talk at least a little bit about it’s plot of all the major quest chains. Please note that unlike most of my other Skyrim posts up to date, this one is filled with spoilers. I will pretty much ruin every major plot point for you so beware.

Let’s start with the storyline I actually quite liked.

The Dark Brotherhood is an example of what a faction specific quest chain should be. Unlike the Thieves Guild chain, this one is entirely about assassination. You start as a lowly new apprentice, then work your way up through the ranks, until you land the job of a lifetime. A contract so incredibly awesome, so daring and so high profile that you can’t believe it’s happening. 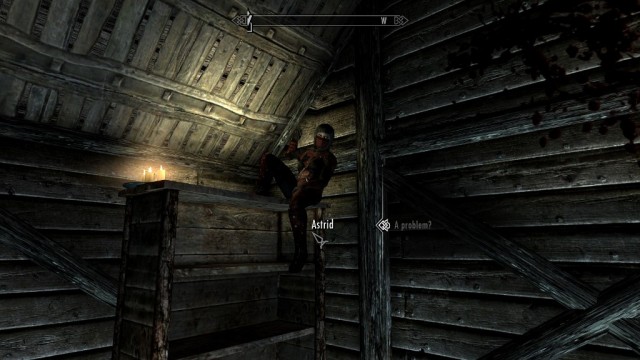 This is how it starts - kidnapped in the dead of night.

Its simple, elegant and straightforward. The main conflict is set up rather convincingly. When you join the Brotherhood it is led by Astrid – a head strong, pragmatic leader who is very protective of her “extended family” of dark brothers and sisters. She plays fast and loose with the brotherhood traditions and rituals putting safety, security and well being of her underlings above the ancient religion the Brotherhood is built around. She is a strong leader, fair and practical.

When you have couple of missions under your belt your sanctuary is visited by “The Keeper”. In the Brotherhood tradition, Keepers take care of the mortal remains of the Dark Mother – the most holy of artifacts of the society. Her mummified corpse is the conduit through which Sithis – your patron deity has communicated with the Brotherhood. Sadly, the Dark Mother has been silent for decades. Ever since her sanctuary in Tamriel was sacked and desecrated, Cicero has been on the run. When you read Cicero’s his journals you can find out that long years of solitude, spent hiding and defending the priceless artifact have driven him mad. Now he is stark raving insane. To makes matters worse, the first thing he does after arriving is not to thank Astrid for her hospitality, but to school her on the lax approach to the traditions and rules of the Brotherhood.

Cicero does not approve of Astrid’s leadership and you know he will be a problem right away. On the other hand you know that to some degree he is right – to return to it’s former glory, Dark Brotherhood should not lose sight of the traditions that made it great, or it’s connection to it’s patron deity. This becomes especially evident when the Dark Mother starts speaking again for the first time in years – and she speaks to you. Of course this complicates things as it immediately makes you Cicero’s #1 enemy, as it was the Dark Mother’s silence, and refusal to speak to him, that has driven him mad in the first place. It also changes your relationship with Astrid who feels that your “special” relationship with Dark Mother is a threat to her leadership.

Not unexpectedly, Cicero goes mad at some point and you end up having to take him down. Astrid follows suit, and decides to seal the deal and sell you out to the Empire. Unfortunately, in a M. Night Shyamalan plot twist she ends up dooming the brotherhood in the process. The sanctuary is destroyed, and most of your “family” dies in an imperial ambush.

Astrid’s betrayal is a bit sloppy. For one, it is never explained why would someone as careful, experienced and distrustful as her, give away the location of the sanctuary to imperial secret police. Up until that point she is characterized as a very direct, and forward person. For one, she has no problems telling you how she does not trust you, and tries to re-assert her dominance at every step. It seems little out of character for her to go behind your back and make a deal with the imperials. Especially since, if you were captured alive, you could easily reveal the location of the sanctuary and all of it’s secrets. It would be downright stupid of her to trust the imperials like that. But alas, that’s what happens. 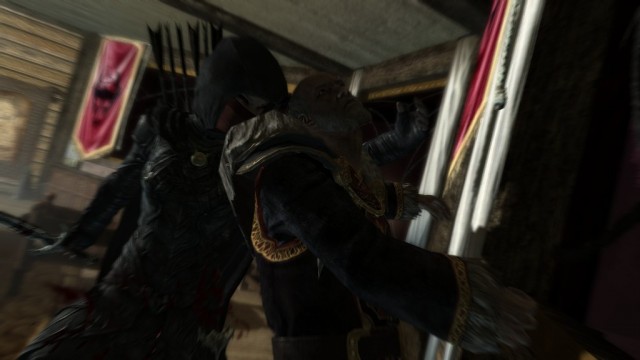 This is how it ends, and its awesome

Fortunately, the lousy twist is redeemed by an awesome final mission. Or rather a re-do of the last one. But instead of pussy-footing with subterfuge and poisons you get to choose how to take down your target yourself. This mission is awesome not because of the writing, mind you, but because of the great setup, and complete freedom in how you execute it. You get to kill the Emperor of Tamriel on board of his flag ship.

I don’t know about you, but I opted for the “Ghost Ship” approach. I killed every living soul on board with the same dagger, leaving it an empty, lifeless husk. I figured that this would have made for an awesome legend: a single assassin eliminated entire crew of emperor’s galleon without being seen once, leaving the murder weapon soaked in blood of all the victims on the Emperror’s desk.

This just shows that Bethesda quest lines are best when they do what they are best at – set up an awesome scenarios, and then take a hands-off approach when it comes to execution. Whenever they try to script interesting set pieces, they usually start making mistakes, and create plot holes. When they stand back, and let you do the job, the result is much better.

The Thieves Guild quest line the exact opposite. It is an example of how not to do quest chains for very specific factions. Rule #1 is that when questing for a specific faction, you should probably be doing missions that relate to the stuff that faction is all about. So thieves guild quests ought to be daring heists, burglaries, pick pocketing challenges and etc.. This is how this worked in Morrowind and Oblivion, but Bethesda decided to take a different approach in Skyrim. Namely, you never actually steal anything. 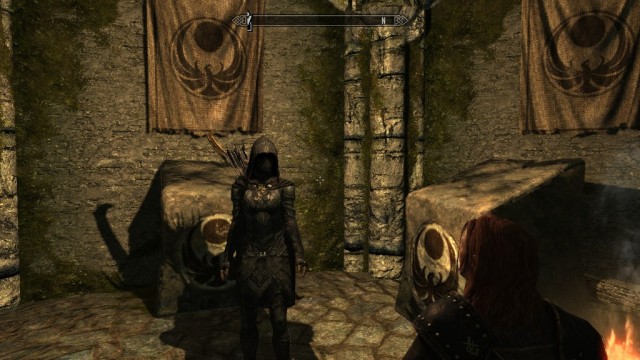 But that’s not the only jarring thing about this quest line. It is doubtlessly the worst one in the entire set. It is full of horribly evident plot holes, it makes the most notorious video game storytelling mistakes. Shamus Young has written a five part, detailed deconstruction of this quest line. He trashed it way better than I ever could, so instead of trying (and failing) to replicate his analysis here, I will just send you over straight to the source.

I don’t think I could possibly add anything to this scathing, and yet hilarious analysis. The entire thing is silly, the rewards suck, you have to babysit horribly ineffective companions, and the scripting always wrestles control from you at every single key point.

The Companions quest chain is probably the first one you encounter in your travels, and probably the most straightforward one. It is also a great deal of fun, because you get to do this:

When you first meet the Companions, they seem like an oddly democratic Warrior’s Guild. First few missions you undertake with them are straight soldiering. But when you finally get in good graces with them, it is revealed that the guild has a dark secret. All the members of the inner circle are Warewolfs. This condition is a result of an ancient curse cast on the founders of the society by a coven of witches. Over many decades, the members of the Companions embraced embraced this curse, and sought to use it to their advantage. To wit, to move up in the ranks and join the inner circle you must take on this curse yourself.

Being a Werewolf is not actually a bad thing. You get a once-a-day power that lets you turn into a powerful wolf form for a limited amount of time. You get bonus speed, strength and extra special abilities and virtually no drawbacks other than the social stigma attached to being a shape shifter. It is easy to see how a group of hunters and warriors would actually view it as a blessing, rather than a curse. But there is a catch.

The curse itself is related to the Daedric Lord Hircine. The souls of those who die as a Werewolfs will be claimed by him, and will join him in his realm of the great hunting grounds. For some, this is actually a preferable fate. Many of the Nords however, hope to go to Sovngarde – their ancestral afterlife realm after death. Some of the elders in the inner circle begin to regret the brash choice they made in their youth, because as they reach an advanced age they realize they will have to spend eternity away from their close ones who went to Sovngade.

I really liked this theological dispute raging on within the ranks of Companions. It added a little bit of depth to this rather simplistic quest line.

I don’t really have much else to say about it. I remember blowing through the entire thing in one sitting, without a single memorable thing happening. Most of the quests revolved either around trying to find a cure for the condition or side-tracked you with a vendetta war against the Silver Hand – an organization devoted to hunting down and exterminating Werewolves.

I will talk about The College of Winterhold, the Empire vs Stormcloaks war and the main quest sometime next week. Stay tuned. After that, there will probably be no more Skyrim posts… Probably.