I haven’t been talking all that much about SOPA on this blog because my world was a bit over saturated with it. More or less every news site and blog I frequent was freaking out about it (and for a good reason). The geek community was on top of it, and so were my readers. So I opted to take the “business as usual” approach and deliver you my usual fare of entertainment, instead of beating the same dead horse as everyone else.

This is also why Terminally Incoherent did not go black on Jan 18. It’s not that I wasn’t supporting the cause. If you follow me on Twitter you know I have been very vocal about my hate for SOPA and PIPA bills. In fact, I did have an anti SOPA overlay script up on the page for one day sometime in December and I don’t think anyone noticed, because no one has ever mentioned it. My audience is just too smart – between the RSS feed readers and add blockers it’s a wonder my AdSense account is getting any money at all.

I thought about participating in the blackout long and hard and decided there was just no point to do it. The entire purpose of the Jan 18 blackout was to spread awareness. Before, the anti-SOPA rhetoric was mostly contained withing tech-savvy communities. Places like Reddit or Hacker News were the vocal hot spots, boiling with seething rage, but mainstream news outlets mostly ignored SOPA leaving the mainstream clueless and ignorant. Blacking out popular websites not only delivered the message straight to the previously oblivious end users, but also forced mass media to finally start covering the controversial bills (often in disingenuous damage control mode). And as such it was an overwhelming success.

We have won. We geeks have put our foot down and turned the tide. We have reached out to the general public, shook them out of their usual lethargic ambivalence and made them think. We managed to scare the living shit out of the bunch of greedy politico’s who have previously been motivated only by cold hard cash: 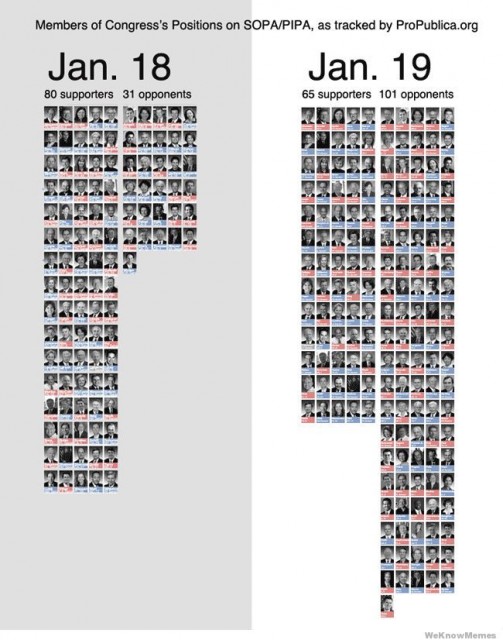 SOPA support before and after the blackout

Never before have I seen such a display of solidarity out on the World Wild Web and it made me proud to be a Netizen and an Internaut. I almost felt guilty not blacking out my site. But then again, whom would it convince? Was there anyone I have not reached with my Twitter ramblings and my other SOPA post? Were there any Terminalists out there that really needed to be made aware of the problem? I don’t think so. So while blacking out Terminally Incoherent would have been a nice gesture, it would also have been a completely empty one. Now, if I was running any kind of mainstream popular site I would have shut it down.

The point is that we have won. SOPA and PIPA got shelved, and the politicians were taught a lesson that the the internet has simply too much of an impact on all facets of modern life – from online commerce, to freedom of expression – to be “patched” with some rushed legislation written by their paymasters from the entertainment industry. Whether or not they will remember this lesson when they are up for another round of campaign funding remains to be seen. But we have won an important battle last week, and that is something to be celebrated.

While we were still drunk with our victory, the feds exacted a terrible revenge and took down Megaupload – the biggest “cyber locker” on the internet, and the prime target of SOPA and PIPA. They just took it the fuck down. It did not matter that it was a foreign rogue site that was previously untouchable. It did not matter that the servers and the employees of the company were scattered throughout New Zealand, Europe and Asia. The long arm of US law reach over, across the international borders, over the oceans and brought down the ban-hammer upon it.

All we could do was watch, slack jawed and bewildered. The entertainment industry and their hand-puppet senators claimed that SOPA and PIPA were necessary because of sites like Megaupload. They needed these laws passed to effectively deal with such threats to their intellectual property. And then, just as we repelled their legislation on the grounds of allowing for overbearing censorship, the government turned around and winked one of entertainment industry’s to-ten enemies out of existence. And it did it without any draconian laws, proving that we have been correct fighting against it. It invalidated one of the key arguments for SOPA.

But they did it at the cost of shutting down a pretty cool website. Now, I can’t really say I have used Megaupload much, or for legit purposes, but I think the nuclear strike against them was a bit much. Especially since the company was taking steps to clean up it’s image, and limit the rampant piracy using automated take down tools.

Ars Technica published pretty good overview of the charges levied against the company, and some of them are legitimate. It seems that the founders were a little bit too cocky, and a little bit too forward in their internal communications giving the feds ample proof that they purposefully dragged their feet on copyright issues, and bragged about profits made on pirated content. They purposefully configured their system in such a way that would make complete removal of an offending file difficult, and re-upping it easy. So while Megaupload was guilty of profiting from piracy, the take down sets up a nasty precedence.

It clearly shows that there is no such thing as safe harbors and that even foreign sites can be taken down if the user-submitted content you host is found infringing on US copyright and the entertainment industry is not happy with your take-down performance. This does not bode well for social media and information exchange hubs that allow user submitted content. Most user driven sites have to deal with a fair share of infringement perpetuated by their users, and now having lost their precious censorship bills the MPAA and RIAA will be bearing down on the fed to “pull off megaupload” on all kinds of other services.

What is going to be the next target? Rapidshare maybe? Or perhaps Youtube. After all, Youtube is full of potential IP infractions. Other than spoiled and corrupt management, what makes Youtube different from Megapload? Mostly their compliance to the unreasonable demands of the entertainment industry. Google, often to the chagrin of it’s users, promptly removes all videos that are reported to be infringing, without checking whether the report is legit or not. They also use automated filters to match and detect copyrighted material. They have spent quite a bit of money and resources to build these reporting and filtering systems, and yet the copyright holders still whine and cry that it’s not enough. Google has deep pockets, but constantly diverting resources to keep entertainment industry lawyers at bay must be a financial drain even on them. Imagine how taxing this must be on new social startups.

In the post megaupload world, all smaller user-submitted media sites can be vulnerable to legal actions against them if they do not not perform to the entertainment industry’s expectations. The brutal take down of the world’s largest cyber locker proves that show of good will, and having anti-piracy systems in place is not enough. These systems must also be efficient, otherwise you may be accused of conspiracy to profit on infringement.

The problem with that is that no one has ever created such a system that works. Google, with all it’s resources and brain power is only able to filter a small fraction of infringing files, and it can only take down videos as fast as the copyright holders can report them. Blocking all infringing content is just something that we do not know how to do – at least not with our current technology. But now, your performance at attempting to do the impossible may be what determines whether or not your site is found to be engaging in criminal activity. And this is disconcerting.

So while we won on SOPA, there might still be hard times ahead. Especially since the entertainment industry is not going to give up that easily. The politicians might have been reminded who they really work for on the 18’th but I doubt they will be able to resist campaign contributions next time they are up for re-election. We know it, and the copyright moguls know it. In fact, the MPAA director was so bold, as to issue a public statement threatening to withdraw financial support from the politicians who don’t do as they are told.

It’s like they are not even playing coy anymore. MPAA is boldly asserting their ownership of US government, PR be damned. The sudden reversal of SOPA support in congress has really pissed them off and they are itching for round two. And I guess you can’t blame them – the whole SOPA fiasco have probably just cost them few million dollars in political campaign contributions and now they have nothing to show for that money. I’m not sure what their next move is going to be, but it may involve the rather obscure bill named H.R.1981 or “Protecting Children From Internet Pornographers Act of 2011”. They will push hard to tuck most, if not all SOPA and PIPA provisions into that bill, knowing full well no one in their right mind will want to vote against it. Publicly opposing such legislation is virtually a political suicide, and if MPAA manages to get their censorship language added into it, we will have a very, very hard battle ahead of us.

If PCIP becomes the new SOPA, a blackout may not be enough. So we must remain vigilant, and keep tabs on our congress critters like we never have before. The war is far from over, and despite our recent triumph the cards may be stacked against us.