If you don’t know who Steve Yegge is, shame on you. Actually, I guess you could be excused because he tends to regularly fall of the face of the internet for months on end. I keep his blog in my RSS reader because his once-a-year posts are definitely worth waiting for. And he has usually really interesting things to say: he has worked at Amazon, now he works at Google and he has all kinds of opinions about programming languages, development practices and emacs. The other day however he wrote a post about, of all things Borderlands.

Yeah, remember that game that I hated? The game that could only be described as NMMO (Non-Massive Multiplayer Online)? It turns out that Steve Yegge liked it quite a bit. In fact, he liked it so much that he wrote what can only be called a dissertation about building addictive game play using Borderlands as an example.

Like most Yegge articles, this one is very long and quite detailed. It’s one of those things you save using Instantpaper, ReadItLater and enjoy over the course of two or three internet sessions. But it is definitely worth reading. Yegge digs deep into the “token economies” that drive most of the successful games out there, and analyzes what exactly makes them tick. But his toughs on the subject don’t just apply to video game design. He is analyzing human behavioral patterns and how they can be exploited to build any kind of communities. The same principles that made Yegge keep returning to Borderlands 4 years after it’s release are the same principles that keep people contributing to Reddit, or StackOverflow or countless other online communities. Virtual fucking bannana stickers:

Borderlands hands out randomly generated guns, Reddit hands out karma, StackOverflow sites hand out reputation, MMO’s hand out levels, skills and gear upgrades – collectible tokens that have no intrinsic real world value but can be a source of pride and accomplishment. If you build in a token system into your community, people may get addicted to it.

The most interesting part is that we are all affected by this strange attraction to worthless tokens. Personally, I couldn’t give two shits about Borderlands guns, or Epic Gear in WoW. I have never actually found a game that would suck me in – I get bored with virtual worlds quite quickly. Sometimes I will get enamored by a game (like Skyrim for example) but that usually only lasts a few weeks – maybe months. Sooner or later I always get bored. But I’m not immune to this strange affliction outside of video games.

For example, I have been thinking about creating a more witty/cool Reddit account and ditching my old one because it is not anonymous enough but I can’t bring myself to do it. Why? Because, dude, I have karma on that account. Worthless virtual points, I know – but starting back from zero would totally suck.

Similarly I may pretend like I don’t care about the number of followers I have on Twitter but I secretly do. Every once in a while I log into Klout and get upset when my score is fell since the last time I visited. I know I shouldn’t care. I know it doesn’t matter. But will still I sit there, scratch my head and think about the stuff I tweeted and wonder what kind of tweets get traction, and which get ignored or cause un-follows.

Hell, even this blog can be considered a token addiction. Every comment I get on a post is direct positive feedback – virtual karma if you will. A measurement of my success at being a blogger or something. It’s irrational especially since this blog was never about becoming e-famous or stroking my e-ego. It was about chronicling my adventures in technology and about geeking out. If I wanted to be e-famous I definitely wouldn’t be blogging about Vim, Git or obscure Polish science fiction novels. I would be blogging about… I don’t know… What the devil do norms blog about? Hmmm… Let me check Twitter trends – that usually does the trick. Here this is what I probably would be blogging and tweeting about – one of them things on this here list: 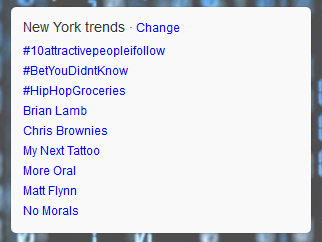 Honestly, I don’t even know what most of these things are. Damn, being normal is quite boring. I have no clue how these people do it. I mean it must like take actual effort to be that dull…

Anyways, anyone who has ever considered building an online community or a multiplayer game should go and read that post and take notes. Which makes me wonder if I should add some kind of karma system into /code and /fun. Or to comments here on this blog. But this is not a trivial task seeing how there are no persistent log-ins here, making any karma/point system shaky at best, and wide open to abuse at worst.


8 Responses to Elements of Addiction