As much as I love hard SF, I must admit that it often does not age well. If you pick up a 20-30 year old science fiction book, you will often find it full of outdated notions, discredited scientific theories sitting snugly along side thinly veiled racism, sexism or other -ism that might have once been but no longer is an accepted social norm. As opposed to fantasy, SF books often loose their value over time.

Inverted World by Christopher Priest is one of the books that has aged very well. It was written in 1974 but you wouldn’t really be able to tell this from the context. Why? Because the author chose to set the book in an odd, alternate and unfamiliar reality.

Picture a large mobile city, traveling on rails throughout some untamed wilderness. The inhabitants of the city spend most of their lives inside, and the only people allowed to leave are members of the five guilds that oversee the laying of the traction, track laying, surveying the surrounding terrain, bridge building and security. The guildsmen are sworn to secrecy upon the pain of death, and are not permitted to discuss the nature of the outside world with those who live within the city. 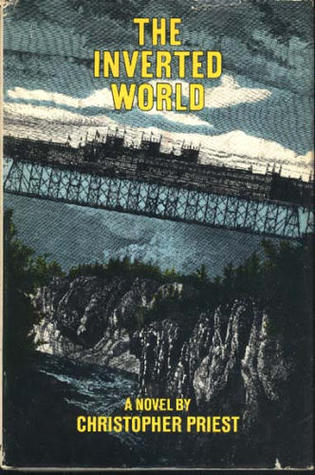 Why aren’t they allowed to talk about it? Well, perhaps it is because the outside world is strange. While the people of the city hail from Earth, the place where they currently live is elsewhere. And by elsewhere, I don’t actually mean another planet. By elsewhere I mean a completely different place that does not conform to the same laws of physics as our universe. Which is also the reason why the city must remain in constant motion. If it was ever to stop, and fall behind the schedule something terrible would happen.

The protagonist, Hellward Mann is a young guild apprentice who upon reaching adulthood has elected to join the Future Surveyors guild, in order to re-connect with his mysteriously aloof father before he succumbs to whatever lays ahead of the city and causes premature aging in all surveyors.

The novel is essentially Hellwards account of his apprenticeship. To become a full guild member he must work a period of time in each of the guilds and learn the inner workings of the city, and also the true nature of the world which is hidden from the other citizens. The guildsmen are not very big on “explaining” or “educating” but rather believe in learning from personal experiences. And so young Hellward is exposed to strange and unfamiliar world, full of things he does not understand. When he asks questions, he is told to be patient and wait which only makes him more and more frustrated.

He is not the only one. The inhabitants of the city are also tired of the secrecy. There is a movement that wants to abolish the guilds, and stop the city dead in its tracks, in the most literal way of that phrase. Hellward sympathizes with these notions, until he is sent with a mission “down past”. He is to travel 40 miles south of the city as one of the final stages of his training. Of course he never makes it that far, because it is physically impossible. He understands why the city must keep moving, why the guilds are structured the way they are, why the secrecy is needed.

When he returns to the city, he finds it besieged by hostile local tribes, on the brink of an internal revolt and the guild navigators mostly ignoring the internal and external strife preoccupied with something very, very worrisome the surveyors found ahead of the city.

The core concept around which the story is built is quite clever. Priest unveils it very slowly throughout the book, always dangling a promise of a reveal in front of the reader. The protagonist, bound by his responsibilities and his oaths is not very inquisitive himself. He patiently waits to learn more, confident all will be revealed to him eventually. He is not keen on stepping out of the line. It wars remarkably well at pulling the reader along. You know that the guildsmen know the secrets of their world, so if you stick with Hellward Mann long enough, you will learn them too.

The final twist in the third act of the story is not much of a twist really. By that time you already have 90% of the information you need to piece things together. The techno babble on the last few pages that intends to justify some of the phenomenons is a bit redundant. But it doesn’t really spoil the book. While it sticks out a bit, it is not out of place.

It is one of these books that are better read cold. The more you know about it, the better. I think I already spoiled a few things in this very review, though probably not much more than what you would read on the back of the book blurb. It is really hard to review things like this – where the main mystery is also the main hook.

Inverted World is an old school hard SF, built around a cool idea. The book doesn’t really delve that much into the human condition, does not develop secondary characters or their relationships. It is mostly about Helward Mann being exposed to an odd, strange environment and trying to make sense of it without any foreknowledge or education about it. And as such it works – the setting is interesting, and bizarre enough to carry the novel.

The writing is semi-decent, but the narration is a bit inconsistent. The first few chapters have a first person, unreliable narrator, then the book jumps to a third person for a few chapters, then back to a first person. Then after focusing on Hellward Man for 90% of the story it jumps to a different point of view character near the end, only to come back to Mann shortly after. These narration changes are a bit jarring.

Apparently the author stitched this novel out of two short stories but did not bother to actually re-write them in order to achieve a consistent tone. This is never a good thing. I know I raged about this sort of thing quite hard when reviewing Taja Grimm’s World but in this book I’m actually willing to overlook it. Vinge really didn’t have much going for him in Taja, while Priest at the very least has a really intriguing SF idea.

If you like old school “let me build a story around this science idea I have” type stories, this is definitely a cool book to read. Personally I enjoyed it quite a bit. The style and tone has some problems, the characters are paper thin, and the ending is a bit weak, but overall it is quite interesting. If you can find it, definitely pick it up. I got mine used via Amazon. While it was in a good shape, the book did show it’s age – the pages were a bit yellowed and the book jacket was slightly worn. Which I guess added to the experience.

This is why I like dead trees as a medium. Old books have character. Reading a paper novel is a tactile experience. E-books to me seem less substantial, if that makes sense. Not that I hate E-books. Not at all. Hell, I was reading books on electronic devices before most of you youngsters even knew that books can come in an E variety. I think my Dell Axim X5 Pocket PC still has Starship Troopers, Ender’s Game and a whole collection of Cory Doctorow’s creative commons books in it’s memory.. Or maybe not – I actually haven’t used that device in years and it may no longer be operational. The point is, I do like E-books, I do see their value, and I actually wouldn’t mind owning a Kindle. It’s that there is something to be said for paper books.