City at the end of Time

I often rag on Fantasy for being redundant, but I have realized I might be unfair. Perhaps my definition of Fantasy is to narrow. After all, I like Neil Gaiman’s writing, and what is it if not Fantasy. Gaiman is strikingly original and he does not pattern himself after the likes of Tolkien, but he still produces stories that have this fable / fairy tale quality that is closer to Tolkien’s work in spirit than the metric tons of sword and sorcery novels that get released every year.

And then there’s Star Wars – which we could argue can be classified as space-fantasy – or at the very least something that lies in the spectrum in between Science Fiction and Fantasy but not firmly in either bracket. But I’m not going to talk about Star Wars here, because I have much, much better example of that kind of in-between work: The City at the End of Time by Greg Bear.

In the previous paragraph I mentioned Neil Gaiman, and it was not just an idle digression. I bought his name up for a reason, because Bear’s novel felt vaguely Gaimanesque. He has the same sort of ability to spin a tale that brushes against fable and legend just enough to give it that mythical, flavor. But where Gaiman tends to be light-hearted and conversational, Bear opts for a tone and mood that can befits an epic tale. And where Gaiman inserts subtle magic and divine influence, Bear uses hard science fiction.

The City at the End of Time is basically what wold happen if the two great Neils: Gaiman and Stephenson had a love child, and that child decided to write a book. It is a deliciously excellent mix of high concept science fiction mixed with the modern day fantasy akin to (but much more epic in scope than) American Gods. 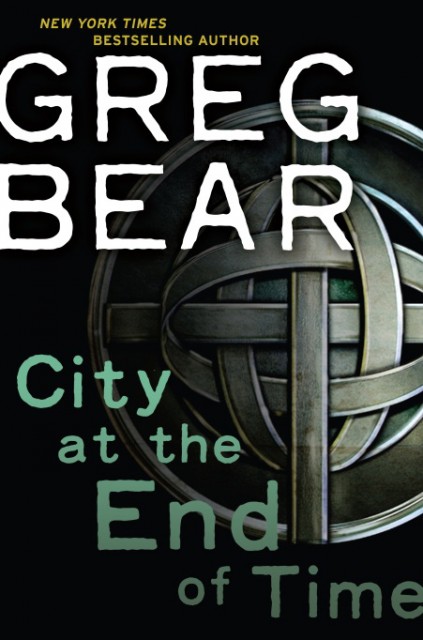 City at the End of Time

What is the plot of this book? Well, the plot is kinda hard to describe. It is complex, twisted and the ideas contained in the book are big. But let me try to give you a short summary without spoiling too much.

In the first few pages we find out that humanity found the answer to Asimov’s Last Question. First we learned to rekindle dead stars. Then we learned to live in spaces in between stars, to transcend matter and bend the non material fabric of the universe to our will. Humanity spread across the infinity, took up myriad of different non-material forms, and waged wars over which types of incarnations are more correct than others. This lasted an unknown millennia, until the aging universe started to crack and buckle upon it’s weight. At first it frayed on the edges, but soon it started falling apart everywhere. Unknown, poorly understood force dubbed Typhon or Chaos started rolling across the universe, consuming everything in it’s path. Humanity, as usual still quarreled, waged wars and screwed around. Eventually all that was left was the ancient solar system – the cradle of the human kind. That too was eventually consumed by chaos, except a single city called Kalpa. There remnants of all the post-human races from all across the universe huddle waiting for the end. Most loose themselves in decadent amusements, while select few still toil to understand the chaos and prevent it from destroying the last city. It seems to be a lost cause since they have already forgotten too much.

But there is at least one plan in motion. One of the great post-human minds is trying to breed ancient humans – the original Homo Sapiens. The problem is that no one remembers much about such distant history. No records of human biology or even chemical makeup have survived. So they have to build the “ancient-breeds” from principles, reverse engineering and tinkering based on very incomplete historical records. How do the breeds help to defeat the Chaos?

Well, that would be a spoiler. But they can somehow provide a link to the past. A link to the modern day, where we meet two of our protagonists: Jack and Ginny. They both dream of Kalpa at night, and seem to be somehow linked to two ancient breeds that were born in the last city in creation, who in turn dream of Jack and Ginny. Both have also one other distinguishing feature – they are fate shifters. They were born with a strange ability to leap sideways into parallel dimensions. Jack for example works as a busker – a street juggler, and he always shifts into the version of the universe in which he never drops the objects he juggles, and in which people give him more money.

Both Jack and Ginny end up in present day Seattle, and long before they meet each have encounter with hunters: men and women who work for an entity known as “The Chalk Princess”. Some consider her a goddess – or some sort of a god-like entity – very powerful and timeless. She seeks out people of extraordinary abilities, bestows gifts of longevity upon them and gives them one mission: to find and bring her all fate shifters.

Then there is Daniel – an old, jaded fate shifter who has learned to escape hunters by “leaping” into other people’s bodies. He has been preserving himself this way for a very long time, but each time he swaps bodies he forgets more and more of himself. What he remembers though is that the multiverse is being churned by some unknown force. More and more of the parallel realities he encounters are dead – mangled, devoid of life and corrupted. As he navigates between the worlds, his choices narrow down until he finds himself in Seatle, in the same reality as Jack and Ginny and those who pursue them.

Bear alternates his narration between the two cities modern day Seattle, and the titular City at the End of Time. He operates with a number of point of view characters – all three fate shifters, one of the hungers, two of the ancient breeds and some other Kalpa denizens. He expertly mixes ambitious post-singularity science fiction with the Gaimanesque style fable about present day individuals with strange powers struggling to fulfil their destiny, while being pursued by capricious gods and their servants with supernatural gifts. At a first glance it may seem like a mish-mash of incompatible themes and concepts, but it actually fits together quite well. Bear manages to wrap it up quite nicely, and while at first it may seem like the different threads in his novel cannot possibly be reconciled, he ties them up in a nice satisfying bow of an epic conclusion.

The scope of the story is truly epic, and the novel is dense with interesting ideas. It is smart, thought provoking and very engrossing. Bear does not reveal all his card until the last few pages and keeps you guessing and musing about the nature of his universe until the very end. This might be one of the best books I have read this year. The only thing that compares is The Sparrow which was good in very different way, so you can’t really compare the two.

I guess what I’m trying to say is: this is an excellent book. You should read it right now. I’ll wait.


3 Responses to City at the end of Time