The joke on the internet is that Pintrest is for girls only. Visiting the front page of that fine service does nothing but reinforce that notion. On any given day, the front page content will likely look like this:

What do we have there? Fashion tips, nail polish color swatch, culinary recipes, book cover of 50 shades of gray and some motivational quotes. Seems like a fairly girly place, doesn’t it? Granted, there is absolutely nothing wrong with running a service primarily targeted at women. Large swatches of the internet are dominated by adolescent males who use the term “feminist” like it was a curse-word, and are oblivious to their own rampant misogyny so creating networks that are open and inviting to women can only be a net positive.

The thing is that Pintrest is not really targeted at women specifically. There is nothing in the design of the service that would imply any gender preference. The front page content is merely an indication that the large segment of the core user base is interested in the type of subject matter that is usually considered feminine – cooking, fashion, etc.. It sort of creates a network effect that draws more people who are into that kind of thing to the site, in turn generating more such content.

But if you are not a cook or a fashionista, Pintrest still has a lot to offer. Case in point, here is how my Pintrest front page looks once I log into the system and the feed is populated based on the content supplied by the people I follow: 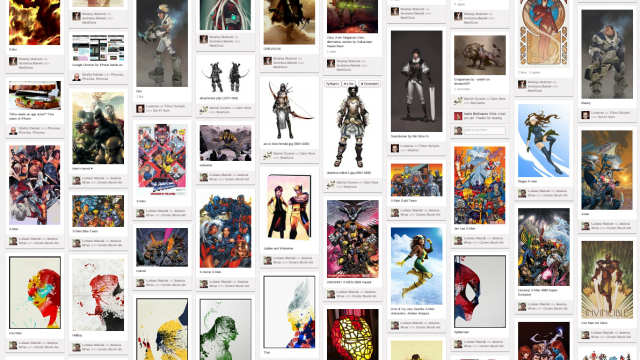 You will notice the content is much different: comic book art, fantasy art, science fictio art, technology related photos, photos of space (nebulae and distant stars) and cool animals. The content I see is exactly the kind of stuff I’m into, and the kind of stuff I would like to save and catalog for future use.

That’s essentially what Pintrest does for you. It gives you virtual “pin boards” to which you can “pin” interesting images organizing them into collections of sorts. Here are some of the pinboards I maintain on my account: 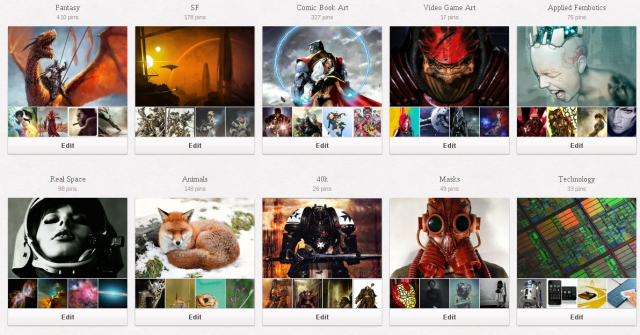 For me the service is essentially a tool for collecting pop art and cool photos. As I go about my day and leisurely browse reddit during down-time I tend to pin any cool images that I find to one of my boards to easily find and share it later. But that’s just part of the functionality. The other part stems from the fact that I’m not the only one doing this.

The type of images I collect in my boards are plentiful on sites like CGIHub, DeviantArt and similar art communities. But if you ever tried browsing these places directly, you probably know that sieving the good stuff from the sea of amateurish and plain horrible chaff can be a daunting task. Reddit usually only bumps the best of the best images to the front page – the hidden gems if you will – but it’s scope is limited. But, by observing who re-pins my submissions I seem to have stumbled on a pretty decent selection of people with similar tastes to mine. Which is why my front page looks the way it does – I just happen to to follow a lot of people who know where to find really good, geeky art or technology photos.

It’s like we all individually toil in the creative content mines, digging for gold, and then share our plunder among each other, all becoming richer for it. It’s like a collaborative search and catalog mission to probe the creative depths of the internet.

Do you Pintrest? If you do, you should probably head on over to my profile and follow some of my boards. That’s my tip for you btw – the best way to use this service is to selectively follow boards, not people. That’s because people have broad interests and will pin all kinds of useless (to you) garbage throughout the day. To make you home page useful, it is better to narrow your focus to specific kind of content that is relevant to you. This is sort of in stark opposition to the normal social network way. On facebook I tend to mostly follow close friends and relatives. On Pintrest I mostly follow random strangers with similar tastes to mine, and stay the hell away from the fashion tips and culinary advice columns that routinely get posted by the people I know IRL.

If you don’t use Pintrest because you thought it was too girly, then I hope this post has illustrated to you that is only as girly as you make it. It can be anything and everything you want it to be as long as you follow the right people and post the right content.

This entry was posted in random stuff. Bookmark the permalink.