Celestis by Paul Park is yet another book to add to my collection of stories with unconventional and interesting aliens. One thing I dislike in my science fiction are space opera style aliens. I’m willing to tolerate that kind of stuff in a TV series, but I expect more from literature. If I’m reading a book and an alien walks into a room and starts talking perfect English and referencing 20th century human pop culture or literary classics from Earth I get annoyed. I want my aliens weird. Is it that much to ask?

Paul Park takes the rubber-forehead alien trope and subverts it in a deliciously brutal way.

SPOILER WARNING:
This review contains massive spoilers. Celestis is a good book, but this review discusses some of the major reveals that make it interesting. Its better to read this book without prior knowledge of these plot points. You have been warned.

Imagine a distant colony world established in a universe without FTL transport. The contact with home is difficult and stranded. There is trade, but trips back and forward take years creating a huge cultural disconnect between Earth and planet Celestis. The colonization project was pioneered by Americans, and over generations the colonists have been striving to hold onto that national identity. But without much contact with real United States the rampant nostalgia and glorification of anything and everything that is Red, White & Blue the culture became an overblown parody of Southern US – complete with cowboy machismo, rampant racism towards the aboriginal population (mirroring the attitudes of southern ranchers towards minorities as depicted in 20th century media) and exaggerated patriotism. We observe this comedic display via the eyes of Simon Myriam – newly arrived ambassador from Earth. Originally from London, he was picked for the position because he was really passionate about English – a language which on Earth have been dead for many generations. 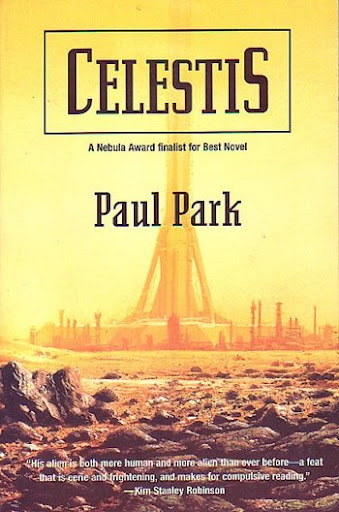 When Myriam arrives on Celestis, it’s arid, dry and hostile climate seems like heaven after living on blasted, polluted and half radioactive, depleted shell of a planet that Earth has become. He finds the local’s deep love for American culture and their rampant patriotism quite ironic (seeing how United States has collapsed long before he was born) but somewhat endearing. Except for the racism.

When the humans came, they ended up completely subjugating the rather primitive aboriginal population. The natives didn’t have much of a culture to begin with. While highly intelligent they were rather passive and uninterested in technological progress living in caves until the humans came. Once the colonies established themselves, the aboriginals were quickly assimilated, many of them adopting human customs and fashion and technology. The well off individuals would go through expensive surgeries, and drug regimens to make themselves look, and think more like humans.

The main focus of the story is relationship between Simon and young aboriginal “girl” Katherine. I put girl in quotation marks, because the aliens are a single sex species but those trying to assimilate into human societies are taught from birth to adopt human sexual identities. Katherine was raised as a girl and views herself as such. She is a devout Christian, and studies classical music of Earth. Her hands have been re-constructed in a series of very expensive surgeries to allow her to play the piano. She and her father represent the “upper class” of the aboriginal society. They can almost pass for human, and the colonists tend to tolerate them. They still face discrimination but their wealth and status and influence they extend over the local population means they tend to be treated with much more respect than poor manual laborers of their race, forced to live in District 9 style shantytowns, and who face a lot of abuse from humans.

Simon and Katherine meet at a high socialite party, and become victims of a terrorist attack conducted by a militant group of aboriginals rebelling against the inequality and human oppression. Kidnapped and held for ransom, Katherine is left without her medication and she starts slipping back to the raw, unaltered state that is natural to her race for the first time in her life. At first she finds it incredibly frightening.

The drugs that most aboriginals take are designed to make their cognitive processes work more like those of a human. Without them they become sluggish, passive and unfocused. The unaltered aliens who live outside human settlements still live like animals, and spend most of their time staring at rocks or sitting and aimlessly rocking themselves back and forward. Their demeanor is akin to that of autistic children who live in their own internal world and only occasionally can be reached by someone from the outside.

However as Katherine quickly discovers, this is not entirely true. As she slips further and further away from her human-like state she discovers her perception an awareness expands. The human made drugs are not the source of her self-awareness and her decision making ability as she initially suspected, but instead they work to suppress most of her cognitive processing. They make her think like a human by switching off entire sections of her brain, and shutting down many of the senses that humans do not posses but the aboriginals do.

Katherine discovers that the blasted wasteland of Celestis is actually lush with life. The surface is covered with plant-like and animals-like entities that exist beyond the human spectrum of perception. She finds herself listening to the rocks, interacting with objects that do not exist for humans, and can perceive abstract ideas to take physical like attributes. When humans talk, she sees their words to have distinct shapes, colors, smells, physical weight and myriad of other attributes. When she falls asleep her mind simply transitions to a different cognitive state, in which she is still capable of walking, talking an interacting with outside world.

Park’s depiction of the inner workings of the alien mind are strange. Katherine’s experience is like a 24-7 acid trip. Simon who is new to Celestis initially assumes the girl is simply suffering severe withdrawal symptoms and is hallucinating. But older colonists corroborate that the unaltered aboriginal minds indeed work on a higher level. While they appear to be primitive, it is mostly because the physical and spatial spectrum that humans live in, is only a narrow perception band in their awareness spectrum. They live rich internal lives and make, trade and discuss things people can’t possibly conceive of or measure with their instruments.

I usually get annoyed when SF authors pull the “this can’t be explained by science” card, but Park does a really good job selling this idea. The psychedelic world of talking rocks, strange invisible animals, ghosts and physical ideas is odd enough to be believable, but at the same time you don’t have to buy into it to enjoy the story. If you are a skeptic (like Myriam) you can simply believe that Katherine is reverting to a more primitive state, and the things Katherine experiences are just oddball hallucinatory artifacts of the way the alien brains are wired – which explains why an otherwise intelligent, self aware race never developed much in terms of technology. Their brains are simply not wired for that kind of cognitive processing, and unless they get enhanced by human drugs, the aboriginals are doomed to live in an endless acid trip.

Or you can buy into it and agree that human perception might be a tad narrow, and that it is possible that there exist things that we have not yet learned how to measure. That we are too focused on our spatial, physical, three dimensional world-view that we can easily dismiss the evidence that aboriginals posses telepathic like powers, and that the planet has a functioning ecosystem that exists beyond human perception, but partially shows up in the fossil record.

It is a good book. It is a little disturbing, little weird and little tippy. But very intriguing nevertheless. Go read it.


3 Responses to Celestis by Paul Park