My Zombies Are Different

Zombies are not strictly a fantasy concept. In fact, they tend to be heavily under-utilized in that setting, perhaps for a good reason. In modern day or futuristic settings when the living dead show up, you can pretty much guarantee tat the world just went into a final countdown, spiraling towards global apocalypse. In a heroic fantasy, zombies are low level mooks the heroes will steamroll over, on their way to the final boss fight. This is mostly due to the way their origin and creation process is explained.

In fantasy, undead tend to be treated as minions of a powerful necromancer. They are unsettling, and can be difficult to defeat in large numbers but ultimately they are not the biggest threat – the real enemy is the evil sorcerer who controls them. This fits into the Fantasy mindset which was derived from and heavily inspired from medieval folklore. This brand of zombies prays on the common fears of the past generations: the unknown powers, magic, sorcery and evil warlocks with sinister plans. The most frightening aspect of these creatures is that they are corpses that rise from the grave, and walk the earth due to corrupting evil magic animating their empty husks.

Modern zombies are built to scare modern, educated audiences. Therefore they most commonly get explained as a highly infectious viral plague or scientific experiment gone wrong. Their most frightening aspect is not necessarily the fact that they are “walking dead” but that they can actually “turn” a living person into one of them. It is the fact that their condition can be, and frequently is transmitted onto a healthy human is what produces the most drama and suspense in zombie related stories. If you get bitten or scratched, you are fucked.

Thus, there is a noticeable difference between how fantasy companies and modern survivor groups fight their respective brand of undead menace. Knights and Wizards will leap in to combat without a second thought (barring a failed fear check here and there) and mercilessly cut down the animated dead without paying much attention to injuries they incur. If a zombie gnaws at you, you just quaff a healing potion and continue fighting. In fact the only way to stop the “outbreak” is to cut through the undead, and dispatch the evil necromancer at which point all the living dead drop to the ground and become just regular, old fashioned dead.

Modern characters on the other hand tend to fight the undead very carefully preferring ranged weapons and make a liberal use of the “immediate tactical retreat” strategy. That’s because even slight injuries can be potentially disastrous. A mere scratch or gash can instantly make you go from being an asset to the team to a terrible liability and a source of a moral conundrum.

That’s sort of always the big question in Zombie stories, isn’t it? If someone gets bitten, what do we do with them? Do we leave them? Do we take them with us? The morally virtuous thing to do is usually to keep the injured person with the team up until the very moment they “turn” at which point you either kill them or leave them behind, whichever seems to be more humane at the time.

But what if there was no such a discrete “turning” point in the onset of the plague? What if the symptoms were debilitating, but their escalation was rather subtle?

I got this idea while Dishonored used the second type of a Zombies, framing them as a plague that was originally spread by rats. The end result – the final stage of the disease were “Weepers” – poor wretched souls whose bodies were so overrun with the disease and so burned up with the fever they could barely comprehend what they were doing. You could see them shuffling along the streets, moaning in pain, and occasionally eating from garbage dumps… I thought it was a great little take on the theme, until a group of these started biting me, revealing that they were nothing more than regular zombies with a thin coat of fresh lore slapped on top.

What if we run with this idea? What if we construct a plague that is very infectious, lethal and debilitating but which does not induce rage or cannibalistic tendencies that we see so frequently in the movies. What if this plague was engineered to exploit some very deeply rooted human behaviors. What if it would pray on human altruism and use common social behavioral patterns to spread itself?

Imagine a disease which would affect the nervous system, similar to the rage virus from the 28 Days Later franchise. But instead of destroying higher brain functions and boosting Medula Oblongota, it would instead rewire and chemically alter the brain structures responsible for social behaviors. So infected doesn’t become an enraged animal – he or she instantly becomes a super-extrovert. The subject becomes restless, craves the company of others and seeks closeness and interpersonal connection. At the same time the virus attacks the sweat glands, and causes mild fever. Early symptoms include hyperactivity, lowered inhibitions and heavy perspiration.

In other words, the early stage of the disease make you behave as if you were a little tipsy or maybe a little high on something. It also makes you super friendly and fun. The sweat you exude by buckets is highly infectious, so anyone you touch or brush against is likely to get high enough dose of the stuff to get sick themselves.

The second stage which comes few days later it adds coughing and sneezing to the equation. By this point your body is weakened by the fever and people begin to notice you are sick. So the plague kicks it up a notch and now sprays the germs throughout the air attempting to infect everyone who comes near you. At this point you also can’t stand the thought of being alone – so even though you are quite sick, you will restlessly wander around searching for someone (anyone) to talk with.

The third stage starts to slowly shut down the body. There are skin lesions, bleeding from eyes, nose and ears and retching. Patients start to uncontrollably vomit bile which carries even more viral payload. At this point they know they are terribly sick and very infectious but they still can’t resist the urge to seek companionship. They go out on the streets, gather in small to large groups and try to keep each other company. They walk around retching, trying to sing songs in their raspy voices (their throats slowly eaten away by the stomach acid they keep vomiting out), and carry around the sicker individuals who can no longer walk. Whenever they see healthy (or healthier) individuals they beseech them begging for help. 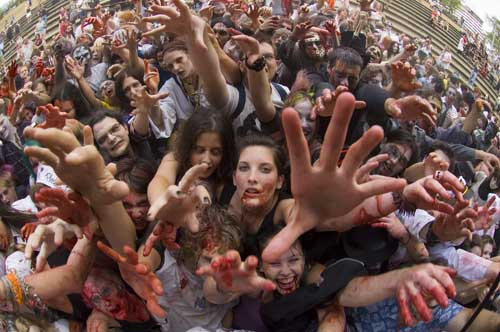 This is actually how the disease strengthens itself. Individuals infected by different strains come together and mutually re-infect themselves allowing the viruses to mutate and cross breed evolving into new, even more aggressive and drug resistant forms.

At the third and final stage, the infected are very friendly and very social and have very strong need to touch and be touched. At the same time, their higher mental faculties are slowly shutting down. Their speech becomes less and less coherent, and they start to have difficulties thinking logically instead being driven by their heightened emotions. They will repeat themselves, tell the same stories over and over again, or get stuck in feedback loops. Eventually, they succumb to the disease and die. Death usually happens out of hunger and/or dyhadration because at the later stages the infected simply “forget” to eat and drink. They will eat if given food though, so if they are receiving aid and medical care they could theoretically keep on going for weeks. Eventually though the constant heightened fever and the viral activity damages their internal organs enough to shut them down. It is not uncommon for the shambling hordes to keep dragging corpses of deceased close ones around with them out of sense of companionship. They will usually prop them on wheelchairs, strollers, or makeshift stretchers and refuse to acknowledge they are dead.

Basic idea is this: you stumble upon a horde of zombies (shambling, bleeding, dirty and unkempt as zombies tend to be), they notice you and start shuffling towards you. But instead of growling noises they beg for help. They ask you to bring them food or water. They beg you to send in medical help. They ask you to save their children. They won’t keep their distance, and you know full well that if they touch you you might get infected. What do you do? How do you deal with this type of Zombie plague?

The main threat from this style of zombies is not physical. There is no danger that they will rip you apart and eat your brain. The scary part is that they kill with kindness. You don’t want to kill them – you want to help them out. But any attempt to help them may lead to getting infected yourself.

How would making the “infected” self aware, somewhat coherent (though highly irrational) and eloquent, change the dynamic of the typical Zombie movie? You can’t just whip out your trusty shotgun and start shooting. At least not without loosing your “good guy” status. It could be an interesting experiment to try making zombies more social, and less monstrous while keeping them just as lethal.


6 Responses to My Zombies Are Different