I have finally gotten my proverbial shit together and gotten my little systems utility a proper domain name. So Luke’s Setup Assistant has a legit, professional looking home now. Which hopefully makes it look more like a tool one would actually use, rather than some shady piece of malware some dude hacked up and put up on Google Sites.

If you want to check it out, the new domain is: setupassistant.org.

In case you are too lazy to click (and for posterity sake) here is a screenshot of how the new site looks at the moment: 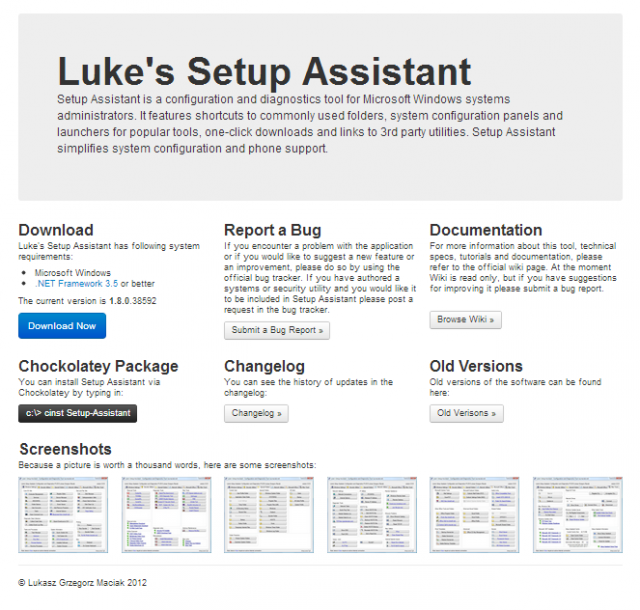 Yes, I know – it’s standard Twitter bootstrap template. Cry me a riven. I’m actually fine with it looking as dozens of other websites out there. The standard buttons in the bootstrap are nice and sharp, and the grid layout just works. The page doesn’t need much more flourish beyond that. I’ll probably personalize it some more over time, but it is good enough for now.

Why the change? Well, first and foremost I have gotten sick of telling people to go to sa.maciak.net. For one, no one can spell my last name correctly, ever. Two, the subdomain sa is rather meaningless acronym that doesn’t really describe the tool in any meaningful way. And of course I felt like this tool deserved to have it’s own top level domain instead of piggybacking on my own last name.

Secondly, I got tired of Google Pages. Hosting the project there seemed like a pretty good idea at the time. It was quick and easy to set up and seemed reasonably easy to maintain. It turns out that the opposite was true. Updating the page via the web interface with it’s mandatory WYSIWYG editor was a chore. The fact that I had to go to one place to update the text on the page, and completely different place to upload the downloadable binary was kinda ridiculous. I’m used to either uploading files via command line SCP or pushing out content via Git. This sort of manual labor was grating and unpleasant.

Finally, the entire project was a mess. It was stretched all over the internet. The website was powered by Google Sites. The bug tracker was stand alone Lighthouse account. The code was hosted in a private git repository at BitBucket.

Now, everything is contained to BitBucket. The website is hosted using their static pages feature. It works much like the way Github does it: you have a repository which serves it’s contents as a webpage. This is actually really great because it allows me to just drop the compiled binary into my web directory from a build script, and then all I have to do is to tweak the version number and push it out to the web.

The BitBucket repository also comes with a bug tracker and a wiki. Much like at Github, the latter is actually implemented as it’s own repository with static markdown documents which I can use for things like my change log. As you can imagine, editing Markdown in Vim is infinitely faster, convinient and more pleasant than struggling with Google’s WYSIWIG interface.

The bug tracker integrates both with the code repository (I can close tickets via commit message for example) and with the wiki, where I can actually link to posted bug reports by simply using their ID number. It all works, it is all interconnected and my life has been improved for the better.

If you are currently using version 1.6 then hit the auto-update button and you will get upgraded to 1.8 immediately. This version is aware of the new domain name, so next time I release an update it will grab it from the correct place. I probably won’t be uploading any of the new binaries to the Google Sites page, so in the future, users with old versions will simply need to upgrade to 1.8 and then run the upgrade again to get the latest and greatest. Or they can simply download the new one, seeing how Setup Assistant always was, and probably always will be a stand-alone executable that does not require any installation.

If you installed version 1.6 via Chocolatey (mislabeled as version 1.7 which is why I skipped to 1.8 now) then you should just let Chocolatey handle the upgrade by doing the usual:

The in-app upgrade feature does not talk to Chocolatey package manager (because most people won’t have it) so if you upgrade it that way, you will be out of sync.

This entry was posted in technology and tagged setup assistant. Bookmark the permalink.