What is your primary computing device?

My primary computing machine is still out of commission which is why my posting lately has been a bit spotty. For the last week or so I have been confined to my 15″ MacBook which is a great little machine but it is nowhere near as comfortable as using a full sized monitor and keyboard. I could hook it up to a regular keyboard and a mouse but then I would have to give up some key-strokes and gestures I can do with mac keyboard, touchpad and Magic Mouse and that would make OSX a bit clunky. 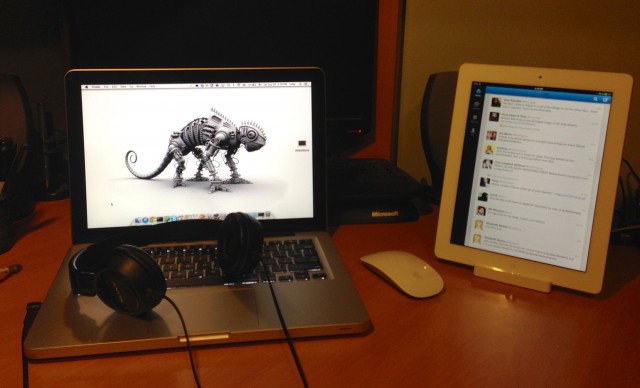 As far as my primary machine – I eventually managed to find a cheep video card I could use to test it. Turns out it was a video card failure, but also PCIe port malfunction. I have two ports on my mobo, and only the top one seems to work. With a cheepo card in that slot the machine boots up, but then gets stuck on “Launch Startup Repair” screen. I figured this probably Vista freaking out that there is a cheep ATI card in the top port instead of Nvidia card in the bottom one. Either that or it has something to do with the fact I pulled out the CMOS battery as part of my troubleshooting, resetting all the BIOS settings to default. Dell likes to do funny things with the partition tables on their stock computers so this can be part of the issue.

I figure this is something I could easily fix by issuing the good old fixboot/fixmbr commands from the recovery console, but for the life of me I can’t find my Vista CD. I have XP and Win7 CD’s but not Vista. I suspect I might have thrown it out of the airlock into the nearest sun when I was moving last year or so.

So for the time being I’m browsing the web on a small screen and type on a cramped little keyboard which is less than optimal. That said I’m getting more comfortable typing on it for longer periods of time and hitting the cmd key instead of ctrl which is actually a good thing.

You see, when I’m on Windows or Linux I can run almost purely from muscle memory. I never actually have to think how to do something – I just do it. I had my Mac Book for quite a while now, but I have never used it extensively. It has always been easier to jump onto a desktop with a full sized keyboard for any kind of serious computing/programming or blogging. Now that I’m “stuck” on it I have to figure out how to move around, navigate and do things efficiently. I get to discover all the little in and outs of the environment you only get to know when you spend enough hours struggling to make the machine do your bidding and troubleshooting odd behaviors. This is most definitely a good thing for me. I am a self professed OS agnostic system nomad, and not being fully fluent in OSX has been bothering me for a while now.

It’s kinda new experience on me – to work on a machine that is not yet a part of me – that’s not an extension of me. It feels wrong like something that needs fixing. This laptop must be integrated into my exo-cortex and must become an integral part of my consciousness now.

I figured it would be interesting to see what kind of setups other people are working on right now. What is your primary home computing hub like? What kind of a machine do you use for most of your daily tasks and/or entertainment?

The computing device you use the most is:

What is your primary OS of choice? What kind of computer do you have? Do you prefer laptops, or desktops? Are you fine using laptop keyboards or do you prefer something full-sized? Mechanical keyboards? Ergonomic ones? Split keyboards? What is the size of the screen you are currently reading this on.

Bonus points if you can post pics on your battle station / control center – kinda like the shot I posted above. Granted this is my temporary setup, but still.


11 Responses to What is your primary computing device?