If you follow me on Twitter you probably already know about my hardware failure. If you don’t… Well. why you should! Seriously, sign up for that thing and click on the bird to become my follower. The number of followers and my Klout score are after all directly proportional to the false inflation of my e-ego. Or something like that. 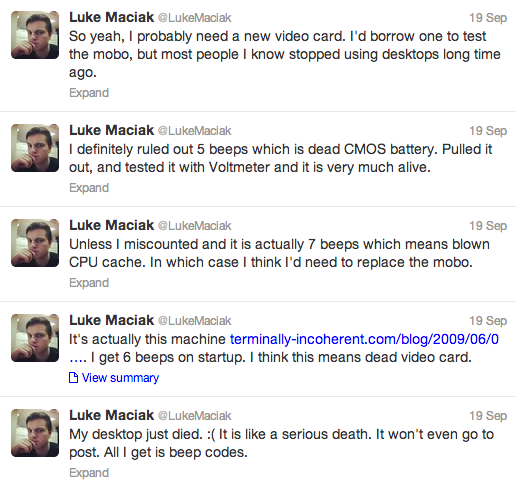 Anyways, wednesday evening my primary gaming rig died. I just updated my iPhone to the latest version of iOS (maybe I will rant about that some other time) and found out I needed to update my iTunes as well. Naturally, since my desktop is running Windows the iTunes update is always followed by a reboot. I have no clue why Apple insists on this, but I suspect they are doing this just to piss off Windows users.

In either case, the reboot ended in a catastrophic failure. The machine never came back. In fact, it never even made to POST stage. When powered up, it would spin up the fans and then emit the following beep code on the loop:

Note that I started recording mid beep, and then was to lazy to edit it out. So the first beep may seem shorter but the fact is they are all the same length.

Here is the million dollar question: can you count the beeps? Because I sure can’t. I consulted the manual that came with my motherboard for the meaning of beep codes, and apparently there are 7 of them. They don’t have alternating patterns – they simply differ in the number of beeps. So the only way to find out what is wrong is to count them. Which, of course, is why these beeps are played as fast as possible. You know, to make them easier to count.

The only thing I could tell about the code right of the bat was that it was longer than four beeps. So I figured I would just start there and work my way up. Five beeps meant memory failure, so I did some RAM juggling. My machine had four 2GB sticks in there and I swapped all of them out, trying to boot it with various combinations alternating every stick in every DIMM slot. Basically I wanted to rule out both the possibility that I have a bad RAM module, as well as the possibility that one of the slots is on the fritz. Unfortunately, none of my machinations had any result. I’m saying unfortunately, because a bad RAM stick would have been an easy fix.

Six beeps are supposed to indicate video card failure. Seven beeps indicated CPU cache failure, which as far as I can tell would probably require me to replace both the mobo and the CPU. I didn’t really have means of easily testing either, so I spent few hours trying to slow down and analyze the audio stream and came to a conclusion that it is probably six beeps.

Unfortunately the machine doesn’t have an built-in video. All there is in the box is a single GeForce GTX 285 card, which I disconnected and re-connected several times. I also tried plugging it into the second PCIe slot on the mobo without any success. I’m assuming it’s dead, but seeing how it still gets power, and the fan on it is spinning just fine, I don’t really have a way to prove it. I have no other box that I could test it in, and neither do I have another PCIe card I could plug into my mobo to see if it works.

In other words I’m currently in possession of Schrödinger’s video card which exists in a state of quantum superposition: neither dead nor alive, until I figure out how to diagnose it properly.

I ordered a replacement card – a slightly newer, faster, and shinier model. When it comes in, my machine will either boot normally or continue beeping in which case it will mean I miscounted, and that I will need to spend even more money replacing CPU and motherboard.

I’m confident that my lovely little piece of junk will eventually start working again. It is just a matter of how much money I throw at it I presume. I guess at some point it will morph into a whole new, more powerful computer. I guess I was due for some upgrades anyway.

Still, the fact that my primary machine is out of commission bums me out a bit. Especially since I just got back into Skyrim and was having a blast with the Dragonborn DLC: 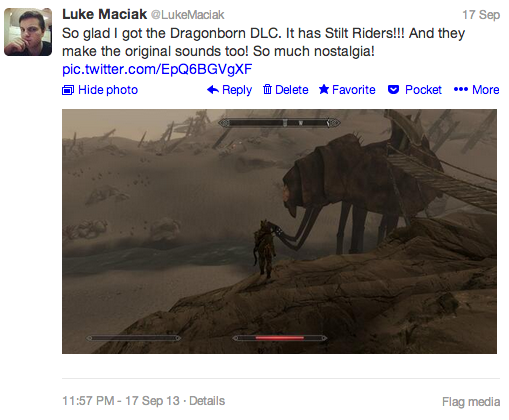 Stilt Striders. So much nostalgia!

Fun fact: last time I suffered from a catastrophic hardware failure I just got back into playing Oblivion. Apparently Elder Scrolls games are not very good for my hardware.

With my main rig out of commission I am now bound to my MacBook, my linux laptop, my iPad and my phone for my computing needs. Which is actually not all that bad, considering that just a few years ago this sort of failure would completely sever me from the internet. Gotta love living in the future.

Have you had any hardware failures recently? How bad was it? Did you repair it? Or did you just buy a whole new machine instead? Let’s share our horror stories in the comments.

This entry was posted in sysadmin notes and tagged xps 630i. Bookmark the permalink.