When I first saw a trailer for the Pacific Rim I thought it was a terrible idea. The haphazardly shot teaser depicted giant robots, punching amorphous monster things using Michael-Bay style rapid-fire cuts and dynamic camera angles that worked so well to make all of the Transformers movies like absolute shit. I saw it as a quick cash-in attempt at making a giant robot movie to ride on the co-tails of Bay’s signature, recurring box office busting, abominable mess of a series. Actually no, I actually expected it to be some sort of unholy union that would combine the worst aspects of Michael Bay’s Transformers and Roland Emmerich’s Godzilla movie. Fortunately I was very wrong about this. 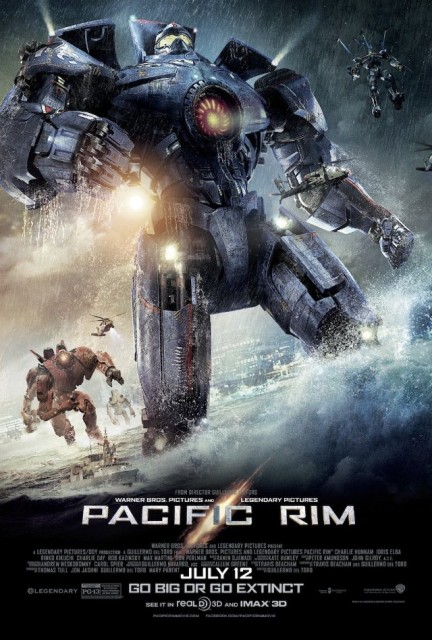 I finally got around to watching it, and I must admit that Guillermo del Toro knows how to make movies. I honestly didn’t think anyone could take a concept such as giant robot anime, and successfully translate it into a live action Hollywood blockbuster movie. Both culturally, logistically and convention wise it made very little sense. Especially in terms of an original production that was not an adaptation that guaranteed to put butts in theater seats regardless of quality. And yet, here we are. Pacific Rim exists, and it is as good, as a movie about gigantic robots punching monsters in the face could ever hope to be.

I’m fairly sure that everyone who wanted to watch it, has already seen it so I’m not even going to bother writing up a synopsis. Especially since the story is as simplistic as it could be. Roughly 90% of the world building is done in the opening montage that serves as a massive exposition dump delivered by a narrator who then vanishes for the rest of the movie. Normally I’d be kinda annoyed at this sort of thing, but here it actually works. It sets up a massive amount of back-story in a very short time, allowing the film proper to start in medias res, while at the same time avoiding excessive flashbacks. The flashbacks we do have, are handled gracefully and explained as the side-effects of the neural link between the pilots. As a result the movie has an incredible forward momentum. The story just pours forward at a breakneck pace almost to the point where it becomes a flaw.

The two-person piloting bit is a really nice touch by the way. Instead of hot-shots in death-dealing machines you end up with pilot teams that must work together and set aside personal differences and issues to fight effectively. Especially when you use it to frame the relationship between the leading characters: a washed out veteran and eager rookie, both with skeletons in their closets, both complete strangers, who have to sync up and learn to work together in order to save the world. It is a perfect set-up that leads to inevitable character development in a sort of hands-off way that is more or less a signature style of this film. Del Toro just puts up these set pieces and the story just writes itself, pieces fall into place, characters go through the motions and spectacular things keep happening on the screen.

It all works very well, and mimics both the spirit and the style of the anime series which inspired it very well. The rivalry between the pilots, the larger than life personalities clashing at the field of battle, the complex battle choreography punctuated by the pilots calling shots or planning angles of attack – it is all there. In fact, I absolutely love the design of the cockpits and the way pilots actually operate their machines. I don’t really know how to explain it, but when you see it in motion, it just feels right. 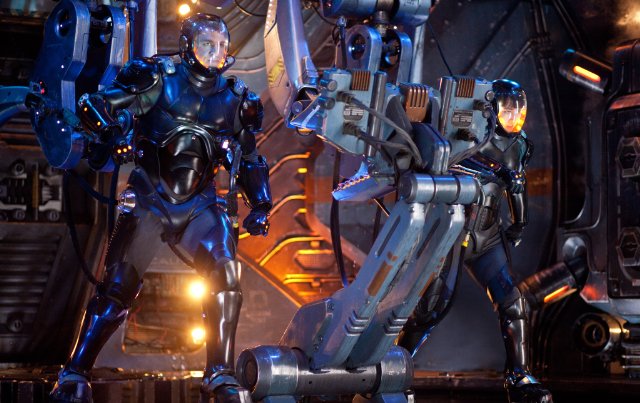 Cockpit design is spot on. It works. I did not think it could work in a live action movie, but it does.

Overall however, the movie feels rushed. I mentioned this in my Thor review: the Hollywood blockbuster format is becoming too confining for the stories the modern writers and directors want to tell. Pacific Rim has a run time of 131 minutes and while it manages to tell the story in that space, it seems all to short. It is my honest opinion that all stories need breathing room: brief quiet moments that explore the relationships between characters or just give us glimpses of their ordinary lives. Little things do matter. They flesh out the characters as people, and they make the world seem more complete and alive. Sometimes it is the meaningless scenes that have no impact on overall plot are what makes the difference between a good movie and a great one. The Avengers was filled with little bits like that (Joss Whedon is the undisputed king of these) and this is why the characters felt so real, and their bickering was so much fun. Pacific Rim has almost none. It feels like a race toward the finish line. When it finally it gets there it feels like you have missed something. It’s not really a disappointment – it is more like sadness that you didn’t get to explore this world a bit more thoroughly. When the credits begin to roll you start wish there was time to stop for a few seconds here and there just to gawk at the scenery or seep in the atmosphere.

Here is a good example: we are told there are only four Jaegger’s left in the world: the renovated Gipsy Danger (btw, the name kinda bothers me as it’s culturally insensitive towards the Roma people) piloted by the hero, the Australian Striker Eureka, Chinese Crimson Typhoon and Russian Cherno Alpha. The eight pilots (well, 9 because Crimson Typhoon is piloted by a set of triplets) are literally the most important people in the world at the moment. Collectively they are Earth’s last remaining hope for survival. And while we do get to know the American and Australian teams quite well, the remaining teams have virtually no lines. While both the Russians and the Chinese do show up in a good number of scenes, they have virtually no speaking parts, and zero character development. 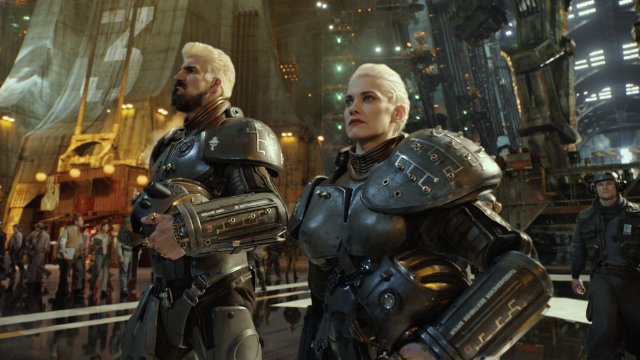 The Russian Team looks exactly how Americans who have never met a Russian person imagined a Russian enemy soldiers ought to look like at the height of the cold war.

This is kinda sad. I wanted to know more about these guys. The Russians look stereotypically tough and gruff. They are sporting the quintessential Ivan Drago look so at least there is some visual storytelling going on there. They are so obviously cliche and archetypal, you expect them to subvert of the trope at some point. But they never do. They remain these cartoon-like caricatures of themselves till the end. I wish we could get to know them. I wish they had a chance to prove they could do something fun or interesting other than piloting the big robot for a few minutes. But they do not.

The Chinese team is even worse. It is composed of three generic, martial arts Asian guys with shaved heads. They have no lines, they are are absolutely non-distinct. They don’t really do anything at all outside of their robot. There is really nothing interesting about them, which seems wrong seeing how they are the only team in the world that fights as a unit of 3 people instead of two. How does that even work? How do they manage it? Do they alternate positions? If not, does the guy in the back ever feel like a third wheel? We will never know, because the movie has no time for them.

The movie feels like it should have been longer. I wanted more of everything. More Jaeggers, more Kaiju, more pilot teams and more competition and rivalry between them. I wanted Raleigh and Mako to fail a few more times before they got their shit together. I wanted them to win the respect of their peers the hard way in the second act, rather than in the 11th hour and partly due to engineering fluke.

The two wacky scientists, and Ron Perlman’s hilariously weird Kaiju smuggler were neat, and useful in terms of moving the plot forward, but it almost felt like they stole the screen time away from the pilots. Lets face it – a movie about giant robots should be mostly about the people that pilot them. They are the people punching monsters in the face, performing acts of bravery and their failures cost millions of dollars in repairs. They are more capable of generating both high drama, action and comic relief. As much fun as it is to see Perlman intimidate the shit out of Charlie Day, I think that time might have been better spent by giving the two remaining Jaegger teams at least a little bit of personalities stories of their own.

Pacific Rim is a devent movie that has been held back by the rigidity of the Hollywood format. It’s broken by design, and it is kinda sad. It could have been so much more if it was longer and paced more slowly. But at the same time it is a small miracle it was even made. Gielmo del Toro must have been saving up favors and good will among producers for years in order to get it green-lit. Live action giant robot anime movies just don’t get made in Hollywood. It probably would have been easier to sell as a TV series, but then it couldn’t possibly have the budget to pull off the spectacular robot fights. So I guess it is as good as it could possibly have been given the constraints of the medium.