I have a Medium now, I guess. I’m told that’s what the cool kids do. Actually, I got it because I like to try new things. It’s kinda like with Pintrest. When I signed up for it, everyone was like “psh, why would you want that”. Well, it turned out that it solved an exact problem I was having: being able to clip, save and catalog cool pictures of like elves, goblins and space ships for future reference / inspiration. I’m not sure yet what problem Medium solves, but I’m eager to find out.

To be honest, it’s a rather strange… Well, medium, but not because of the technology and design aspect but rather the content which is best described as profoundly obnoxious. By that I mean, that it can sometimes be insightful and profound, but most of the stuff that shows on my dashboard (or feed, or whatever you call it today) is just god awfully obnoxious, self aggrandizing, insufferable, “I am success story, and so can you!” digital circle-jerk. So naturally I decided to ruin it for everyone by posting profound bits like How I taught a hobo to program in 7 days (and so can you). But this post isn’t about Medium though feel free to hijack the comment thread if you wish. That’s what it’s there for.

I mention Medium because it was through it that I stumbled upon a bastardized version of this article. Also, because intro paragraphs are hard. The linked post is actually kinda long, which is why it was re-cut and reduced in scope to fit on Medium. Either that or it was mangled by that extra polished post editor of theirs (when will people learn that no matter how hard you polish that WYSIWYG turd of a concept, it will never become any less shitty). Either way, the core of the piece is this video of Louis CK talking about smart phones.

Heavy stuff right? No it is not. It’s a comedian doing a bit on Conan. I have no clue when standup comedians have become the sage philosopher kings of the internet but apparently this is what we are doing now. This is how we do profound now. But fine, let’s run with this. Wisdom of the YaR and all that.

Comedy can be used to communicate profound and educational messages. Louis does make a few interesting points in this short video. I think that the most important bit was at top of his rant, when he humorously depicted how technology can potentially be a barrier for learning empathy. Everyone here is probably familiar with the another bit of comedy wisdom known as the John Gabriel’s Greater Internet Fuckward Theory which comments on how anonymous publicity can alter online behaviors. Louis CK poses an interesting question as to what happens if this altered behavior becomes the norm? What if an individual never reaches the “Normal Person” status because of a digital barrier that has imposed public anonymity on them too early? 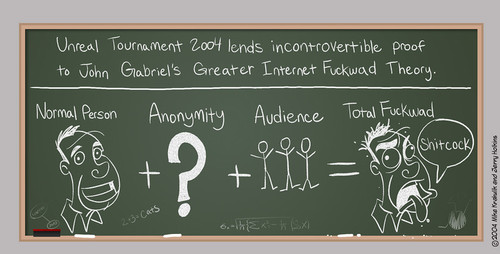 We are all born as self centered egoists, and only through socialization do we learn crucial civilization building skills such as empathy. Altruistic behaviors are learned, and they often countermand baser instincts such as self preservation. And yet they have allowed us to build thriving societies. But what if that socialization is retarded by artificial means?

You could say that my generation was raised by daytime TV and Hollywood blockbusters. The glass tube was the analog babysitter and information teat via which the neglected and under-parented masses learned their values. And to it’s credit, that medium actually tried to impart some values upon the younger viewers. Chief value was of course brand loyalty, but selfless hero archetype was strongly represented. So there was at least that.

What medium do the digital denizens of today get their parenting from? What is the automated babysitter of this generation? I shudder to think that it’s 4chan, reddit and the social media sprawl. What heroic archetype do these platform rise above all else? A smug, conceited internet troll perhaps? What if these kids become arrested at this stage of development, and never move on.

Are we rising our very own Vile Offspring who will in the future tolololo-loop our virch-spaces and erase our backups for the LULZ? Will post humans be weakly-godlike raging sociopaths?

The answer is no. Call me an optimist, but I think that while technology can be a barrier, it can also be a channel that helps to develop empathy. Face to face socialization is overrated. People make a big deal out of it, but the truth is that the only way we can even remotely approach getting inside of someones head is by reading their written word. When you read a personal account or a story, you identify with the author, or character. You become them, and you experience emotions through them. The internet gives everyone a platform to publish their intimate thoughts either by writing, or via visual media of different kinds. Push button, share thoughts. Push another button, learn how to be another. I would have been much less of a person if I did not have this digital connection to the world.

There is a limited number of people you will meet face to face in your life, whose personal stories will change the way you think. How often do you read a blog, or forum discussion, or even a Medium post that moves you, and makes you consider things from a new perspective. One that you would never discover if it wasn’t for a random link, or random click. The internet is a funnel for empathy. And the torrent is only getting stronger, as we discover new paradigms and ways to share our thoughts. Soon, you won’t just read or listen – you will feel and experience with the author. Our vile offspring will not stay vile for long.

As for the rest of his bit, I feel that it is an old riff on this old “chest-nut”: 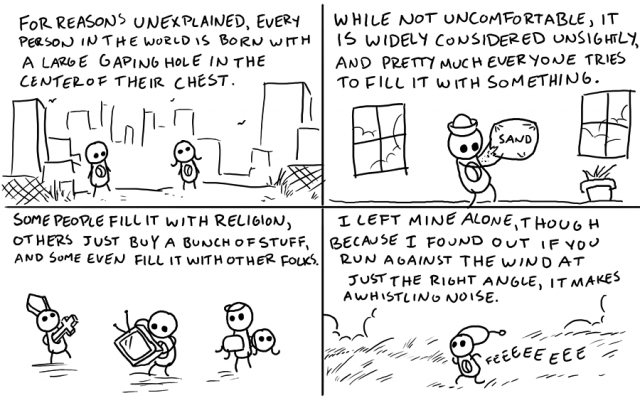 The original article I linked like six million words ago actually quoted Pascal and Tolstoy. I’m quoting motherfucking Dresden Codak , because the YaR decreed comedians as the philosopher kings of now, and I am not going to go against the grain. Also, Aaron Diaz makes a really awesome stuff, and you should follow him on Twatters and Tumbalors and whatnot.

As to the looming emptiness inside, lets do an experiment. Put down your phone, close your eyes and just sit there. What do you see? What streams fup from within? Is it despair? Let me try…

Ok, all I get is a river… A river of stars, cut up with luminous streaks of Busard engines. I see an armada, at the helm of which stands a woman with an ambition to wrestle the throne away from the True Empress. To that with she enlists the thrice cursed seventh legion, travels beyond the veil to forge alliance with the Banshees and entertains the notorious pirate prince at her court hoping to us his numerous troops in the final conflict. Shit, it’s to late for NaNoWriMo, isn’t it?

Wait, what were we doing? Oh, right. I was supposed to talk about introspection. About that emptiness within. I remember reading a very poignant quote one day. Something about the fact that we spend our entire life working to get closer to other people, but when the time comes we die alone. In that final moment, it is just you, and everything else fades away. Don’t remember where it was from so let’s just say it was from a standup comedy routine, so we don’t anger the YaR’lings. I remember thinking to myself “thank the fucking God, like all I need is other people coming in and ruining my death with their bullshit”. In my defense I was a teenager, and it was long before I decided that dying is way old school, and I want to live forever through some Kurzwelian miracle. 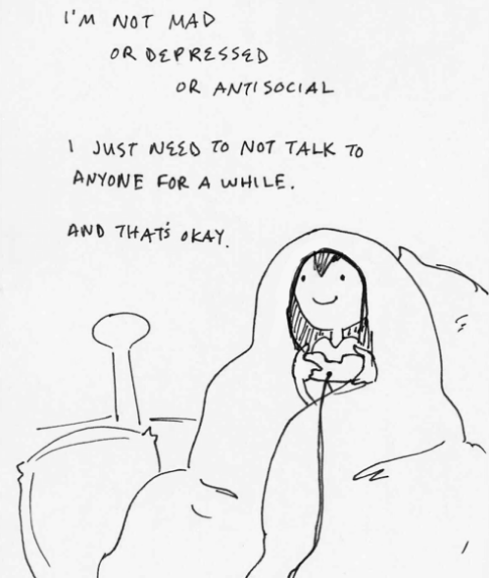 I guess what I’m saying is that while I acknowledge there is something to this notion, I can’t fully relate. CK is oversimplifying things, which is actually quite the norm for extroverts who can’t comprehend different cognitive makeups can possibly exist. I don’t have that hole. Or rather that icy swelling CK described in his video feels like a warm and cozy respite. When I’m driving my car, alone, left to my own thoughts I actually feel at peace. And it’s not that I’m a misanthrope of some sort. I just need to get the fuck away and be alone to get centered, and get my head straight. I’ve always been this way. Technology did not make me like this, and it also did not normalize me into an extrovert. Sometimes I fear I will end up like that guy from Zombieland who totally missed a Zombie apocalypse because he was kinda preoccupied and busy for a while. That if I don’t make a conscious effort to actually get out of my shell, socialize and explore, I will fall into some solipsistic black hole, forget how to interact with outside world, and what’s worse, be perfectly content that way and not give a shit that it happened. So there is that. Empathy is hard because not everyone fits into a neatly defined template. You can’t put my square peg into your round hole, and damn it, no it is not an innuendo.

Technology might be toxic in some ways, but then again what isn’t? It can be used as a barrier or a buffer to push people away. It can also be used as a bridge for social interaction. It’s all about how you use it. For every downside, there is a slew of wonderful benefits, and yet unexplored opportunities. Let kids embrace it, and find their own way with it. Guide them, but don’t hold them back. Be aware that human condition is a spectrum wider than you probably think. Not everyone works like you inside. In fact, few people probably do. We are all different. Technology is a bridge we are building. It is the best chance we have to truly get to know each other. Every man is an island, but now we have boats, and are slowly starting to figure out how to build underwater pipelines and bridges between us. If you reject this, if you shut it down, you bring that existential dread of a lonely death upon yourself.

Remember that you are the obsolete model. The children are our conduit to a brighter future. If you are lucky, they will take you along for the ride. But knowing how people are, most of the living will have to be dragged kicking and screaming across the digital divide…

Also, don’t get your philosophy lessons from a comedian. Instead get them from an internet guy with a blog, because blogs are journalism and therefore I am right.

This entry was posted in futuristic musings. Bookmark the permalink.