The big movie release this month is of course going to be The Hobbit: The Desolation of Smaug. Everyone is excited for it, and so am I, albeit cautiously knowing full well that these new films can never be what the original trilogy was. But I think I just found another movie that I am even more excited about, because of its potential. Let’s face it, we all know exactly what the Hobbit movie is going to be. But this is something that is very much right up my alley, and very much… Well, this blog’s alley:

It’s a new Spike Jonze movie in which a lonely man played by Jaquin Phoenix falls in love with a an personal assistant expert system installed on his phone. I have not seen the movie yet, and I haven’t really read too many reviews to avoid getting spoiled. I have no clue what the final product is going to be like, but the trailer suggests that the movie might actually be trying to explore a genuine romantic bond forming between an old style human and a turing grade artificial intelligence. If this is the case, then I might actually love Spike Jonze forever. In fact, he might become the patron saint of a future human rights movements that will seek equal rights for non-biological sentient, self aware, entities.

The thing is that Hollywood really likes it’s stories to be anti-science and anti-technology and anti-progress because that’s what people respond to. The alarmist, cautionary science fiction is easy to make, and it sells well. It has been the staple of the genre since… Well since forever. 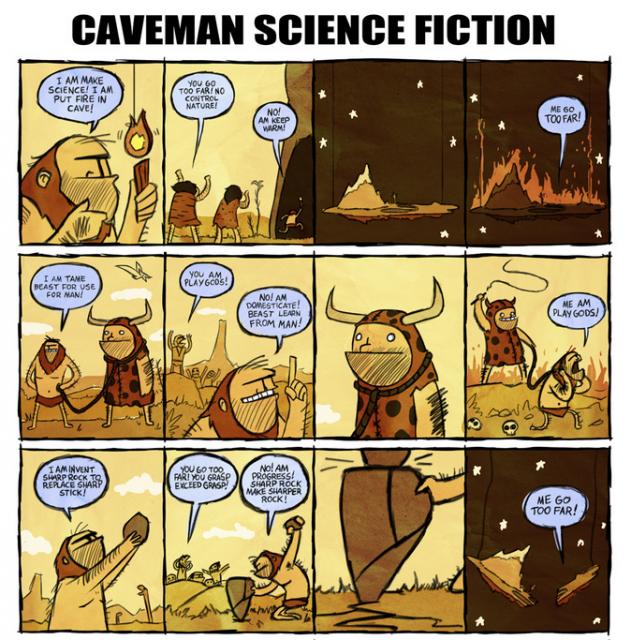 I’m pretty sure we’ve been doing this since caveman times.

With that in mind, it is rather easy to figure out how a low effort, low risk third act of such a movie would play out. Theodore becomes progressively more attached to his artificial companion, until his friends and loved ones become concerned decide to intervene. Some emotional tear-jerking confrontations later, the protagonist finally understands that Samantha is not a real person, and that the “real” people in his live care and love for him, and can offer him more than his “fake” girlfriend ever could. That he only fell in love with her because she was custom designed to fill the void in his life. In other words, Lars and the Real Doll, only with a doll that talks, and learns to adjust her response to become whatever it is that you want at any given time.

In itself, that probably wouldn’t necessarily be a bad movie – just a lazy one. There is a lot to be said about the way modern technology “learns” about us to better cater to our needs, and the implications of this. Samantha might be the personification – the end result of the cognitive bubble that the technology creates about us. You know what I’m talking about, right? When you’re signed in to Google, the search results are filtered based on your past activity. Facebook learns who you like, and who you like to stalk and prioritizes their stories on your feed. News sites are doing this too nowadays. So an OS that learns to be the perfect companion, with just the right sense of humor, and just the right emotional responses based is a very real possibility. And if that’s what Jonze’s move is about then it will probably get some good critical reviews for being timely and well put together cautionary tale. And then it will fade away into obscurity and no one will ever talk about it again, because even if timely, the “beware of technology” trope is so common, and so bland by now.

But, if it is not, then the movie could be timeless. If Jones had enough foresight, enough vision, and enough courage to do something unconventional, then the thesis of the movie might be that the relationship between Theodore and Samantha is actually a legitimate, real connection. That real, intimate connection between two minds is possible, regardless of whether your cognitive processes are result of electrochemical reactions or algorithmic iterations. If Jonez was really feeling ambitious he could use this story to explore what does it mean to be human, and then push the definition to a breaking point. If Samantha is self aware, capable of emotion and has understanding of what love is in our culture, then why can’t she be in love with Theodore? Are her emotions less valid because they are not a product of chemical and hormonal reactions? And why is it wrong for him to respond to those feelings in kind?

In the trailer she appears 100% Turing-grade. Her responses are indistinguishable from those of a human being. She learns, she laughs, she has a sense of humor and sense of irony. Online, or on the phone she can pass for human without a slightest problem. If it is impossible to distinguish her from a human, then why can’t she have human emotions and human reactions? What makes our, human brand of sentience superior? If Samantha can perfectly mimic love, and be convinced that she is in love, then who are we to deny this? After all, can we ourselves define and quantify our emotions and judge whether or not they are valid?

I don’t think there ever was a movie that addressed this. Back in the 80’s we had Short Circuit about a lovable robot who had emotions. And the audiences bought it: Johny Five was alive, and ended up with a US citizenship in one of the sequels. We have accepted his personhood on the basis that he was able to show emotion, and empathize with people. Whether this was a clever algorithmic mimicry, or Real Emotion™ (whatever that might be) did not seem to matter. Johny was a person, because he behaved like a person, and viewed himself to be a person. So why Samantha can’t be a person too? And if Johny Five is allowed to experience friendship, compassion, platonic love then why Samantha couldn’t explore romantic love?

It’s a bit of an arbitrary restriction isn’t it? We are perfectly fine accepting robots and artificial intelligences having all kinds of feelings, except the romantic ones. Part of it is probably due to the fact that there is a strong connection between romance and sex. That’s what trips people up, but probably for all the wrong reasons. Love isn’t all about sex. In fact it doesn’t have to be about sex at all. Two people who have no sexual drive or who are incapable of having sex for whatever reasons (medical or otherwise) are still fully capable of romantic love. So saying Samantha isn’t real because she has no body, can’t be touched and etc is kinda shitty, as it exclude a lot of real people who can’t touch or be touched, for example due to paralysis. If Samantha and Theodore make each other happy, then who are we do deny them this happiness based on some completely arbitrary ideas of what constitutes personhood.

In fact, it gets even more interesting if you consider that artificial intelligence could just be a metaphor. Samantha behaves and self identifies as a woman and is (for lack of a better word) “dating” a straight man. But the society as a whole frowns upon their relationship because she is “not a real woman” due to the fact she does not possess female biology. Similarly, Theodore is thought as less of a man for reciprocating her love. This is actually not science fiction – this is something real people are dealing with in the real world right now. Samantha could be a futuristic stand in, that is far enough removed from the present to be able to tell a story depicting struggles faced by cis-trans couples in a way that might just be palatable to a overwhelmingly transphobic mainstriem movie going audience. Granted, this could be an interpretational stretch but it is one of many avenues of human condition you could explore with a love story like this.

Of course if we give Samantha personhood, Jonez would have to address the power imbalance in this relationship. Theodore purchased Samantha, and he holds the keys to her continual existence. So obviously it is in her best interest to forge a strong emotional bond to her “owner” for her own self preservation. So even if we assume Samantha is a real person, and has real emotion, the question still remains as to whether or not she and Theodore can truly love each other. Can there even be true love between two individuals who are not, and can not be equals. The power balance can only tip like a sea-saw between them (Samantha after all controls Theodore’s online presence, bank accounts, etc..), but they could never keep it level. The question shouldn’t be whether the relationship between the two protagonists is unhealthy for Theodore because Samantha is a program. It should be whether their love is unhealthy for Samantha because she is technically Theodore’s property. 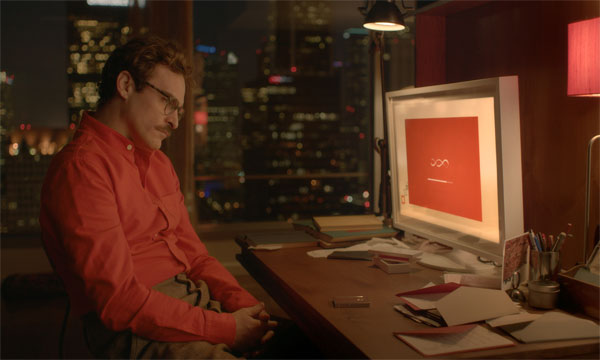 Theodore owns Samantha. Samantha controls and manages all of Theodore’s online assets. Power imbalance and opportunities for abuse are staggering.

The ideal third act should involve the two lovers realizing the power imbalance in their relationship. Seeing that she is becoming increasingley manipulative in the interest of self preservation, and he is becoming emotionally co-dependent on her as a result. It should end with both of them making a mutual decision and opting to split up to preserve what they had, and prevent this from being mutually destructive relationshop. If they really love each other, they must let go.

Unfortunately I have doubts that this is how it will play out. We haven’t really seen a movie that explored personhood vis–à–vis artificial intelligence in a positive, affirmative way since… I don’t know… Probably Short Circuit. And no, Spielberg’s A.I. doesn’t count because it was pretty much Pinocchio but with the third act replaced by the aliens guy from History Channel giving you the middle finger. I’m thinking that the emphasis will be on Theodore and whether or not it is “right” for him to feel the way he does about an artificial intelligence. And if we’re lucky the moral of the story will be that, yes, even if Samantha wasn’t real, the connection the two had perhaps was. That the quiet moments they shared were not invalid, and that Theodore came out a better person for it.

It remains to be seen what Jonez did with this material. I hear the movie is good, but I am not exactly sure what that means. How good could it be. Good and mind-blowing for an average person doesn’t always mean good, and almost never means mind blowing for a futurist and transhumanist.

I apologize in advance for pre-emptively ruining it for you by geeking out over the trailer. It probably will never be as good as I would want it to be.


3 Responses to Personhood and Artificial Intelligence (Her – 2013 movie trailer)