Hey Ash Whatcha Playin’? commonly abbreviated as HAWP is a web based comedy series that I’ve been on and off following since about 2008. Every once in a while someone will post a link to a recent episode, or I find one burred somewhere in my subscription list, then I remember it exist and go catch up on all the stuff I missed.

The series is a collaborative effort of the sibling duo of Ashly and Anthony Burch with frequent cameo appearances from their father. So in a way it is a family show (as in made by a family), but by no means is it wholesome. The Burch clan is actually portrayed as deeply dysfunctional, and while at the surface the series follows the old two gamers on the couch formula, most episodes feel like they should have “the aristocrats” tacked on at the end.

Most episodes are 3 minute short sketches, that typically involve the characters talking about recent video games, or video game concepts while doing horrible things to each other. Kinda like this:

Usually, Anthony is the straight man and the audience avatar who has interesting, well thought out opinions about the game industry, gamer culture and the internet fandom. Ash on the other hand usually takes on a role of a lovable, but very deranged, dangerous psychopath who is prone to randomly stab people, poop in their beds or come up with crazy life-ruining schemes just for lulz. Papa Burch typically looms in the background as an absentee father figure only to pop in every once in a while to subvert this or that trope about fatherhood.

That said, the series is not all about poop and murder jokes. It has moments of sheer brilliance:

Using nothing but two minutes of humorous dialog between two characters, and a few short clips from Saints Row 3 the siblings deliver a scathing commentary on the state of the game industry in 2011. They manage to point out the meaninglessness of having “moral choices” in games which do not attach any narrative or mechanical significance to them, and at the same time make a very poignant comment about gender/race representation. Their argument is concise, thought provoking, uses specific game examples and subverts viewer expectations by proving that a game in which you beat people up with a giant dildo is actually the most inclusive, and most morally nuanced title of the year. And they still manage to get one of the characters sprayed with fake blood. They literally “dropped all the mikes”, whatever that means.

Of course not all episodes are this on point. HAWP has always been a more or less a product of the so called “gamer culture”, which is especially evident in some of their earlier episodes. For example, in the Gears of War episode from Season 2, Anthony gets caught writing homoerotic fan-fiction on a message board. This is basically both the setup and the punchline:

Get it? Because being gay is literally the worst thing ever apparently. Granted this notion not unique to gamers culture. Popular culture has been portraying homosexuality as something comically undesirable, and ignoring the existence of bisexual or asexual people since forever. These themes frequently crop up in sitcoms and comedies: like the often quoted you know how I know you’re gay routine from the 40 year old virgin which is almost always re-enacted when there are more than three bro-dudes in the same room. So you can hardly blame HAWP for doing what everyone else did. Or for doing that infamous, and much criticized wife beating episode.

On the other hand the series has always been pretty good about using Ash as a comedic character, rather than eye-candy. When fans requested a Street Fighter IV and demanded to see skimpy schoolgirl Sakura outfit, it was Anthony who bit the bullet and wore it:

Ash and Anthony always had a decent grasp of the problems with representation of women and people of color in video games, and in gamer culture as a whole. I don’t think they ever intended to be offensive, but every once in a while they would write off-color jokes, or punch downat marginalized other groups for the sake of getting a few cheep laughs. This sort of thing happens to the best series.

The main reason I’m talking about the show now is that I have recently watched the entire Season 4 in a single sitting (as a form of procrastination tactic), and was pleased to discover it was a big improvement. Not just in terms of production values, but in the writing and framing their jokes. In Season 4, Ash and Anthony seem to be much more socially aware, and much more careful constructing their narratives. This new level of maturity is also evident n the way they are handling the presentation of the show and interaction with the fans. For example: all their episodes now have trigger warnings.

This is something new for them – a clear departure from their old way of handling criticism or fan backlash. Back in 2011 the siblings responded to the controversy surrounding their domestic abuse episode by retconning as an intentional ploy to promote serious discussion of sexism. Yeah, seriously. Then they went on to make multiple episodes that referenced that event. In 2013 however they have finally acknowledged the fact that the episode was a mistake, and they seem to regret that it has become such an entrenched part of HAWP continuity. They are finally moving on: 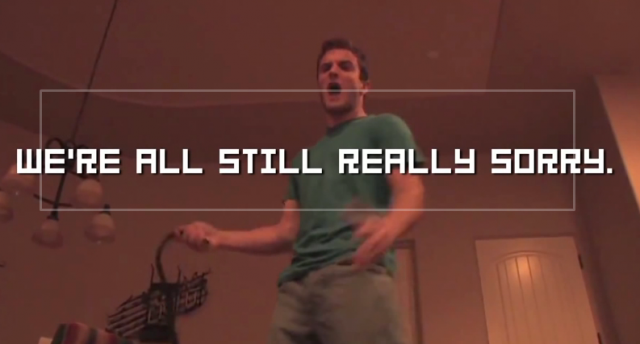 Season 4 as a whole seems to be more interested at punching up rather than punching down. One of the recurring jokes of the early seasons was basically: “Anthony is gay, and that’s bad”. Now, his joke seems to have been flipped around and morphed into “Ash is gay, and that’s actually even the actual joke”. The humor is derived not from going “ew, gay” but rather from the fact that, for example, Ash has no game whatsoever:

The above episode uses “sexy booth babes” as a link-bait, but then actually delivers content that is both amusing and also thought provoking. This little two minute skit, of Ash miserably failing to flirt with a trade show model actually carries quite a payload. For one, it normalizes homosexuality as something that doesn’t even warrant a comment. It presents a humorous situation, that many convention goers can probably relate to. And while doing all that it also provides some interesting commentary on the practice of using professional models in skimpy outfits to sell games or tech gear. It uses this silly situation to point out these sort of aggressive sex-driven sex tactics often make people uncomfortable, regardless of their gender, or sexual orientation.

HAWP also started to use Ash’s newly found interest in women to make jabs and parody the kind of juvenile sexism that is rampant in gaming communities. Ash basically exhibit’s sexual maturity of a 12 year old boy posting in a Youtube comment thread:

Season 4 spends a good deal of effort to establish Ash as a “real gamer” as opposed to vapid “fake girl gamers”. At some point it seems like the siblings are taking a hard stand against women who have the gal to report on, or review video games while looking sexy in the episode titled Hot Slutz:

While their point about using sex-appeal to “sell” game reviews and commentary plays into, and perpetuates objectification of women in the industry as a whole is not without merit, it seems a bit regressive. It completely ignores the fact that the fake girl gamer stereotype is just as harmful. Or at least so it seems, until the two-part Season 4 finale.

The first episode titled Unfinished Business actually seems to reinforce the thesis stated in Hot Slutz and takes vicious jabs at possibly the most famous so called “fake girl gamer” of all time: former Attack of the Show host Olivia Munn.

The second episode Taken to School includes super cringe inducing song and dance number, but also, dare I say, a little bit of character development for Ash. The closing monologue acknowledges that while the over-sexed “gamer gurlz” are problematic, Ash was also wrong demonizing them. That perpetuating the “fake gamer girl” meme creates a barrier to entry for women, who must be tested to prove their street cred, before they are accepted.

In itself, this sort of discussion is unremarkable. But it actually means a lot when it is presented by a series infamous for using a man beating his wife with a belt because a girl beat his high score in Geometry Wars as a recurring joke. The fact they were able to tackle this rather complex social issue while at the same time still hitting their quota for cheesiness, fart jokes, gratuitous violence, murder, obscure video game references and continuity nods in under 6 minutes is even more impressive.

The willingness to criticize gamer culture, abandon easy fan-favorite but tasteless jokes, own up to past mistakes and understand that things like trigger warnings provide a valuable resources to viewers are all clear signs of maturity and self awareness. Especially since it all comes at a cost. If you read the comments bellow each of these episodes you will see a disproportionate amount of manger and complaints that the show now has an “agenda” now. Because trying to be more inclusive and accepting and less insulting to disenfranchised minorities is apparently some sort of evil “agenda”, whereas exclusion, slut shaming, gay bashing, domestic abuse and generally punching down are, you know, normal, wholesome and fun. Dark comedy does not have to be about kicking people who are already marginalized by mainstream society. You can still be edgy, irreverent and controversial when you are punching up rather than down.

But the backlash in the comments is actually a good sign. It means that their message is reaching exactly the right kind of audience. Not all their viewers will agree with it or even understand it. But few might, and that’s always a good thing.

The Burch siblings are growing up, and I couldn’t be more pleased. I’m looking forward to the next season and all of their upcoming projects. It’s probably worth mentioning that both of them are doing other interesting things outside of their series. Ash did voice work in Borderlands 2 as Tiny Tina and has a few indie films in the pipeline, out of which one titled Must Come Down has already been released and is available for purchase. She also recently appeared on Will Wheton’s Tabletop series which is worth checking out just to see her out of character. Anthony is actually working full time for Gearbox as a writer (doing most of the work on Borderlands franchise), and is also doing a solo web series for the Escapist.

If you have an hour or so to kill, go check HAWP out. The series has some low points, some really funny moments, and some really interesting commentary from time to time. If anything it is consistently entertaining despite its flaws. The most interesting aspect however is probably watching the comedic duo grow up over the last 6 years, find their unique voice and figure out how to talk about serious issues in humorous, irreverent way.

What is your take on HAWP? Like them? Hate them? What is the web series that you have binged on recently? Let me know in the comments.