A few months ago I wrote about my desire to get a Chromebook. Well, I finally broke down and got one. At first I wasn’t really sure if it was worth the expense but now that I had it for a few days it seems like it should have been a no-brainer. I mean, you can’t really go wrong with a $200 laptop which weighs less than an iPad, has an actual working keyboad and runs a real web browser. 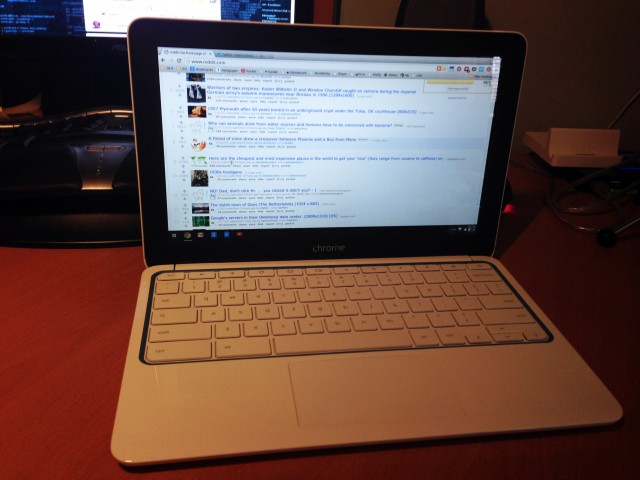 Granted, before plonking down the very modest amount of money (compared to other tablets and laptops, you financial situation notwithstanding) you should understand that this is not a general purpose computing device. It is a web browser with a keyboard. While you can use it for “work” via all manner of cloud services (Google Docs, Microsoft Live, Share LaTex, etc..) it is not what it was designed for. It was built for browsing the web and comfortably typing in your Facebook updates, or making notes in Markdown Journal. It is a device that offers a hybrid experience that lies somewhere between a tablet an an actual laptop but it is not a replacement for either.

I do own an iPad and it is a perfect device to use if you like to read or watch videos in your bed, on the toilet (though I have a policy of never taking electronics into the poop palace) or on the couch. If I’m going on a trip, or staying somewhere overnight I typically load it up with consumable media and take it with me. I usually shunt downloaded PDF’s into the iBooks, use Kindle for purchased content, Comic Zeal for reading comics in CBR format and Comixology / Marvel apps for downloadable content. It works marvelously as long as I don’t have to type a lot on it.

Hell, even if you hook up a Bluetooth keyboard to it, copying and pasting and switching between different pages and apps tends to be a pain in the ass. Whenever I type on the touch screen I yearn for a real keyboard. Once I hook up a real keyboard I start yearning for a real mouse or a touch pad because fingering the screen to switch tabs or apps completely breaks my flow. Mouse and keyboard go are a great combo for a reason. It will become abundantly clear as soon as you sit down to do any serious typing and/or editing on a touch screen device. 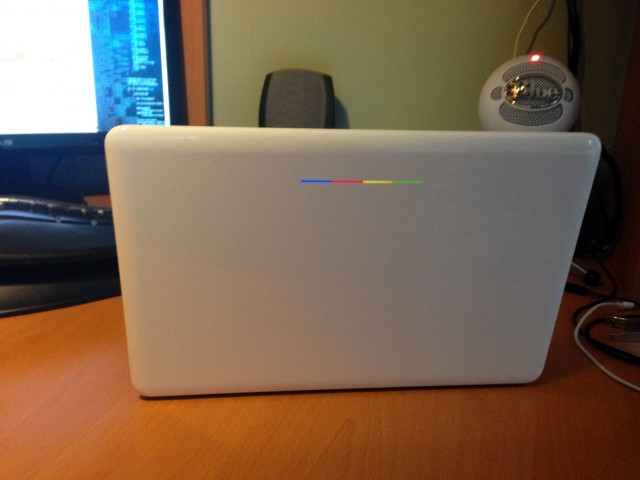 Light Strip on the Back

This is where a Chromebook comes in: it lets me maintain my flow. It lets me compose a blog post complete with links, quotations and even code snippets without driving me absolutely insane with awkward mouse-less multitasking scheme. Not only that: as soon as you sign into Chrome it syncs up all your extensions, bookmarks and bookmarklets. This means I get the full benefit of indispensable little user experience improvement tools such as Adblock and Last Pass which don’t really work on my iPad due to extensive app sandboxing.

I keep comparing the Chromebook to an iPad because I think this is the most constructive way of thinking about it. I have seen countless reviews of these devices, all of which concentrate on comparing it to regular, fully functional, multipurpose computers. I think that’s a little silly, because in such a comparison the Chromebook will always come up short. The best way to think about it is as a low end tablet that swaps the touch-screen with a keyboard and a touch pad, and replaces the sandboxed app ecosystem with Chrome Extensions. This means that while you may not get the latest version of a flappy/angry bird themed game on it, you will have access to tools that can actively modify your browsing experience. Browsing the web on a Chromebook is no different than browsing on a Mac or Windows PC. 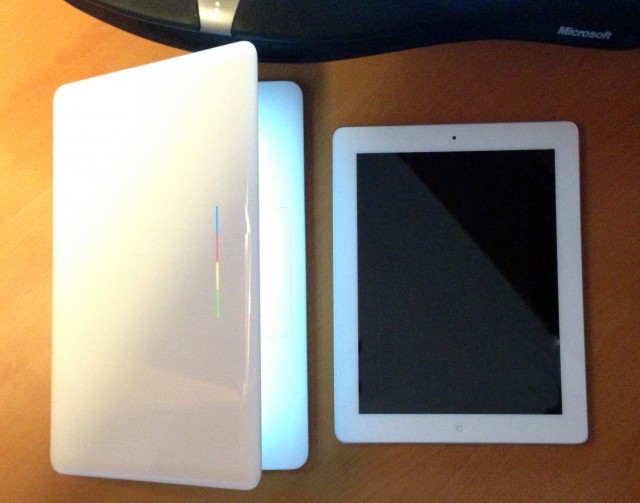 Size Comparison with the iPad

The Chromebook 11 is tiny, and weighs almost nothing. I actually believe that it is a bit lighter than my last gen iPad and has similar battery life. The other day I used it for roughly five consecutive hours of browsing (including some light editing in OneDrive version of Powerpoint) and I still had roughly 80% of charge remaining which is quite impressive. My MacBook’s battery would be more or less dry at that point. I don’t really think this is sheer battery efficiency, but rather the amount of processing being done.

Chromebook uses an Exynos 5 dual core 1.7GHz CPU which doesn’t actually seem to get very hot at all. I had the device on my lap and the underside was barely lukewarm even during heavy load which is probably contributing to the battery life. At a glance the slow CPU combined with mere 2GB of RAM don’t really inspire much confidence in this things ability to perform under stress. Indeed, if you open several tabs and load computation intensive pages the performance does suffer. Probably the most annoying side effect is laggy scrolling of “heavy” website. The Chrome OS itself however performs very well. It boots in seconds and it wakes up from standby instantly. You can literally take it out of your bag, open the lid and start typing.

I have used netbooks that were similar size, weight and price range before, but not of them even comes close to Chromebook with respect of performance and responsiveness. Those devices were severely bogged down by their heavy-duty operating systems. Chrome OS makes this form factor work.

In my initial post, I expressed a concern that Chomium OS seemed to be missing a lot of libraries which crippled the web experience. So far the Chromebook had none of these shortcomings. I used Dropbox, Microsoft Office cloud tools, Share LatTex service, Youtube and even Netflicks. All of which worked rather well. Netflicks was a little bit sluggish to load and buffer videos but playback was actually acceptable. It’s probably also worth mentioning that the invisible speaker built into the rim around the keyboard is surprisingly loud.

If you ever wanted a cheep, disposable, super-tiny, super-light laptop like device for web browsing, then Chromebook 11 is perfect for you. You can just throw it into a bag and not worry about scratching, damaging or breaking it. It will definitely not replace a regular laptop, nor can it compete with a tablet with respect to portability. To use it you still need a table, or at the very least a lap to prop it on. But I think it offers unbeatable experience for typing up emails, note-taking or doing some light web based work that does not require firing up native tools. It’s a great value for very little money and I highly recommend it.

This entry was posted in technology and tagged gadgets, review. Bookmark the permalink.