I am a rather mobile person. Mobile in the sense of technology I can pick up and relocate at a whim. Even though my primary computer is a gaming desktop, a recent hardware failure helped me to realize that I can be just as productive on my trusty MacBook. My laptop can do just about everything my desktop can (other than running high-end games that is) and my iPad is great for browsing the web and interacting with social media on the go. Last year I took it with me when I went to Disney and it performed very well as a dedicated Reddit, Facebook, Twitter and Kindle client.

That said, both the MacBook and the iPad are rather expensive, high end pieces of equipment. Whenever I need to transport them somewhere I’m rather concerned for their safety, because of the potential high cost replacing either of them. I figured that my little arsenal of mobile computing devices needed something cheep and expendable that I could just throw in a backpack without a care in the world…

This line of reasoning lead me to a rather interesting conclusion: why not a Chromebook? What can be more low end and expendable than a hardware web browser? 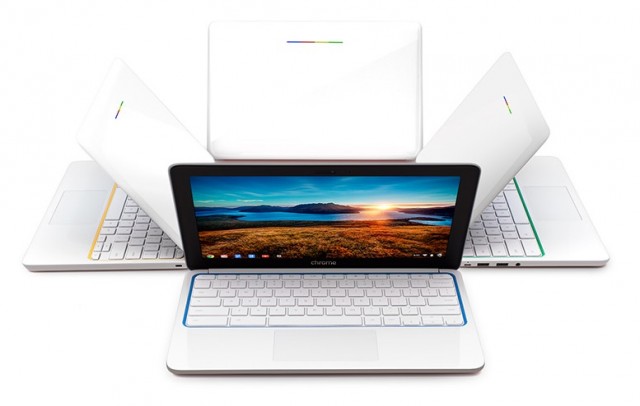 These Chromebook things even look nice.

When you really think about it, a lot of the personal work I do is actually web based. This blog post, for example is being typed up in a browser window. So are my personal “notes to self” which half the time are actually posted from my phone. Most of the important files I might or might not need while I’m out there are saved in Dropbox and fully accessible from the web. Any time I need to tabulate any data, Google Spreadsheets have pretty much 99.9% of the Excel/OpenOffice functionality I would ever need. In fact my Warhammer army lists are maintained as Google Drive spreadsheets these days. Last week I needed to urgently update a LaTex document and I didn’t have my laptop with me. I was still able to get it done using the excellent ShareLatex.com service.

I would say that roughly 80% of the things I do, can be done with web based tools. Coincidentally, when the internet is down, and I’m fully offline there is precious little I can typically do on my laptop/desktop other than playing single player video games that don’t call home. So in essence, an online-only, thin client for web apps could very well be a great “throw around and don’t care” spare, junker laptop.

I’m not necessarily looking for best portability, as I’m looking for expandability. I already have an ultra-portable combo that has unbeatable battery life, and it looks like this:

It is super light, fits in just about any bag, and lasts forever. The downside is that I’d hate to lose or damage it, and it is somewhat limited in what it can do. Google Drive app actually works reasonably well, but Share Latex does not. Chromebook would have about the same functionality but with the advantage of running a full blown version of Chrome, and having a full sized, less cramped keyboard and touch pad/mouse support at fraction of the price. The tradeoff would of course be a much bigger form factor and much shorter battery life.

And of course there is always the potential for installing a full blown linux distro in a chroot, without actually wiping out the ChromeOS from the device. You technically can’t do that on an iPad so that’s yet another small advantage there, that helps to offset the fact that you are essentially using a laptop shaped web browser.

Before plonking down $200 for the device, I figured out I might as well test drive it. As you know, ChromeOS is mostly open source. Google is actually playing it smart and only selling it pre-installed on tested hardware platforms to stave off any hardware related issues. But, since the source code is available online for free, people have actually put together downloadable builds you can burn on a CD or bake onto a thumb drive for personal use. The most popular source of such test builds is probably Hexxeh, whose nightly build I installed on this lovely device:

A survivor of the great thumb drive extinction event.

Yeah, it’s a thumb drive. The only reason I still have it, is that it is actually kinda pretty on my key chain. I don’t really do anything with it anymore, so it seemed like a good way to utilize it one last time before it joins floppy disks and VCR tapes in the history bin labeled “mysterious things you can find in grampa’s attic”.

How was it? Well, to be honest I kinda felt pretty much at home. I logged in, and Chromium immediately started downloading all my Chrome plugins including AddBlock, SessionBuddy, Pocket, LastPass and etc.. After a few minutes it was pretty much a picture perfect mirror of my laptop… And I could actually see the tabs I have left open on my laptop using the “other devices” feature.

Chromium OS actually have came a long way since I messed around with it last time. These days it actually has a fully functional command line terminal (available via Ctrl+Alt+T) which you can use to ssh anywhere. It also has a local file system, which was a bit of a pleasant surprise. You don’t actually have to clutter your limited Google Drive space with random internet downloads. You can save them locally to your hard drive and there is a nifty file browser that can access them for you.

My only gripe with the entire experience was that I couldn’t open PDF files at all. This was a bit frustrating, because I was trying to use ShareLatex and every time I compiled document it would prompt me to download it. Upon downloading, I would try to open it, and the file browser sent me to Google App Store to download appropriate plugin. The App Store then was like “Dude, PDF file support is built in, GTFO”. So it was more or less an endless frustration cycle.

Lack of support for PDF files would be a deal breaker for me, and I was refusing to believe that Google would actually ship laptops that would have iffy support for such a fundamental, and common file format. Turns out I was right. I believe the PDF viewer on Chrome Books works fine, but the entire plugin is proprietary and therefore can’t be shipped with ChromiumOS source code. So my biggest issue with the OS so far was basically just a problem with the hackish build I was using.

So at the moment I am rather tempted to order a Chrome Book and see how it works out. In worst case scenario I still end up with a cheep, shiny, white, fully expendable, low end, solid state laptop that I can utilize to experiment with random ass Linux distros. And I kind of like to have an old, low powered laptop or desktop around for whenever I feel like doing some tinkering. Currently I don’t have one because all my junkers died of old age, and I chose not to pump money into ebay archeology to uncover some ancient used parts to repair them.

An yeah, I know – on Chrome OS 100% of my browsing history is likely going to be uploaded directly to the NSA servers, which kinda sucks. But seeing how my ISP is Comcast which is also in bed with the governments, I don’t really see how this would be any different from my regular browsing on my desktop.

Any Chromebook users reading this post? Have you had good or bad experiences with the OS? Has any of you purchased the ChromeBook 11 laptop? How is the hardware? Is it useful for anything else if you decide you hate the OS? Let me know in the comments.