My favorite part of the original DOS version of Prince of Persia was the sword fighting. I didn’t much care for the super hard platforming and the only reason I ever put up with it, was that there was a chance I will be able to fence some dudes on every level. In fact, I kinda wished that the game was just that: a series of combat challenges instead of the endless, annoying platforming. The mechanics involved were incredibly easy, as they involved a single button to lunge or parry, and side-to-side movement. Despite the simplicity it did provide a surprisingly complex system in which you had to watch your position with regards to the enemy, parry his blows and exploit his openings. That single button did a lot, creating a lot of possible plays and approaches to each fight. Not only that, but the combat felt visceral and brutal. It rewarded recognizing patterns and anticipating enemy movements. Skewering the opponent in a single blow after noticing and exploiting an opening was far more satisfying than slowly chipping away at their hit points until they finally fell over.

It wasn’t until the PS1 era before I experienced this sort of simplistic, expressive but at the same time fast and deadly combat system. The game was known as Bushido Blade and it was built like a classic, button mashing fighting game, despite not being one at all. It had no combos or health bars, but instead followed a principles very similar to the ancient fencing techniques employed in Prince of Persia: all hits were either lethal or incapacitating and the combat revolved around active blocking, positioning and exploiting enemy’s mistakes to deliver the deadly blow. It was of course far more advanced technically: it employed different stances (typically with the weapon held low, middle and high), an array of different weapons ranging from rapiers and katanas to spears and halberds, three different attacks that had different range and timing depending on stance and weapon, large open arenas with destructible terrain and active blocking mechanic that took positioning, stance, weapon durability and terrain obstalces into account. All of these features combined together into an incredibly complex fighting system, which played a lot more like chess than Tekken. To this day I consider it one of the best sword fighting simulators I have ever played.

I consider Nidhogg to be a hybrid love child of the fighting systems from these two games. It is reductionist both in it’s graphical style (that is very reminiscent of the classic Prince of Persia style), as well as it’s mechanics. Instead of Bushido Blade’s dazzling array of moves and fighting styles you get two buttons: attack and jump. It does however retain a stance system allowing you to move your sword up and down between three discrete positions. When combined with directional keys these controls combine into a limited, but incredibly expressive range of possible movements that include leg swipes, drop kicks, throwing the sword at the opponent and etc. 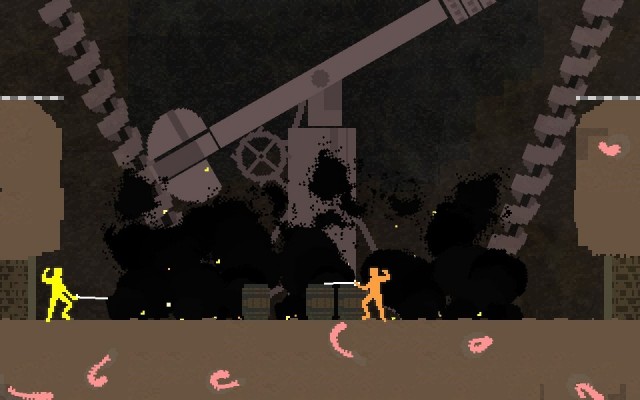 Most importantly however Nidhogg offers the exact type of intensely tactical, but at the same time fast paced, visceral and bloody combat experience as I described above. In fact, it is probably even more brutal and unforgiving than the two other games which did have a number of non-lethal or partial damage scenarios. In Nidhogg contact with the opponent’s blade is always lethal, but death does not end the round. It simply gives you the right of way, and your enemy re-spawns immediately a little bit ahead of you. The only way to win a game is to continue moving forward defeating, or avoiding the opponent until you reach the edge of the arena and jump in to the mouth of the titular Norse dragon thing.

You can see a video of Game Grumps playing the game on local PvP below:

Each game is a wonderful mish-mash of madly exhilarating, button mashing action and slow, deliberate tactical fencing. Sometimes you can win a game by simply surprise stabbing your opponent once, and then making a bee like for the end screen using well timed jumps and rolling leg swipes to get there. Other times you can spend a long time edging into position and waiting for the enemy to make a mistake. It makes for varied and interesting experience, especially when playing with other people.

I didn’t really know why this sort of game play appealed to me so much until Anthony Burch put it into words in his review of the game:

Yomi is a Japanese term which means “knowing the mind of your opponent.” Guessing what they’re going to do and planning three steps ahead, all the while knowing that they’re also guessing what you’re about to do. I’ve heard of yomi as an idea, but I’ve never been good enough at any multiplayer game (…) to experience it for more than a half-second at a time.

After picking up Nidhogg, I experienced yomi after about five minutes of play.

This is exactly the essence of Nidhogg. It is a game about Yomi – about predicting and anticipating the moves of your opponent and using it to your advantage.

Arguably you can experience Yomi in just about any PvP game, but as Anthony mentions, this tends to be considered a high level skill in most. What seems to bring it out in Nidhogg is the inherent simplicity an lethality of combat. When you play a game like Street Fighter or Tekken where base attack do little damage, there is no need for reading and anticipating your opponent. Low skill players typically win by attrition by slowly chipping away the enemy health. You don’t lose a low skill game because you didn’t block in time and got hit – you lose because you got hit a lot, over the span of the entire round. It is not until both players can execute powerful finishing combos that can deplete the entire health bar that the ability to predict the opponent’s next move can win or you a game.

It may seem counter intuitive, but simplified move sets, lack of combos and one hit deaths are actually excellent design choices for fighting games. They create a unique experience allowing mere mortals to experience the kind of high-level tactical lateral thinking that is mostly associated with pro gaming circuits. I hope we will see more titles like this in the future.

In the meantime, go pick up Nidhogg. It is really fun, and makes for a great party game if you can hook up multiple controllers to your PC.