Saga made by the creative duo of Brian K. Vaughn and Fiona Staples is one of the hottest selling comic book series on Comixology. There is a reason for that. It is a damn good comic book.

Few months ago Comixology was running a promotion and giving away the first issue for free. I think that was before they got acquired by Ammazon and forced to rip out in-app purchases from their iOS reader. Either way I was able to snag it for free and file it away for the future. I didn’t read it back then because I was busy working my way through Prophet. Even as it was on my backlog, it was never really forgotten. Panels, quotes and costumes based on the comic were constantly showing up in my Twitter and Tumblr feeds suggesting it wasn’t just another popular series, but rather something akin to a cultural phenomenon sweeping through my corner of the geekosphere. 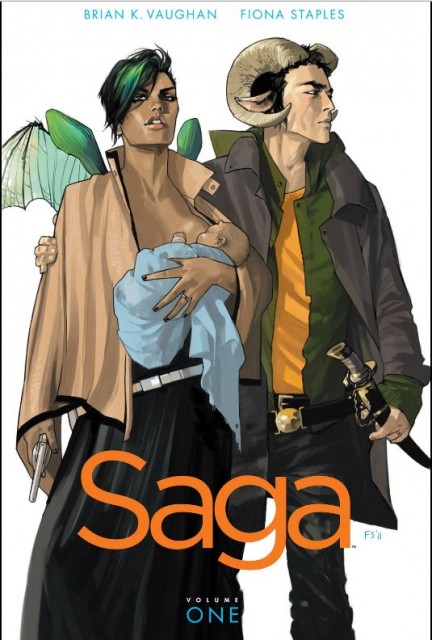 Few days ago I finally decided to check it out. It was probably a mistake considering that it was the middle of Summer Steam Sale and that my credit card was already on the table ready for electronic purchases. Needless to say, I now own the three collected volumes and all the loose issues of Saga that are currently available for purchase. I get it now. I fully understand why everyone is so obsessed with this series. 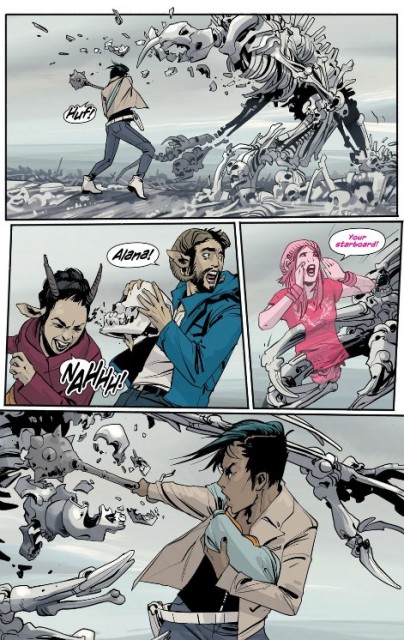 Saga is a mix of SF and Fantasy

It is all about the characters. I would say that they are the main draw. Saga does the Game of Thrones thing where there are no real villains, and the antagonists are just as interesting and fun to follow as the protagonists. They are vibrant, colorful, beautifully penned by Fiona Staples and masterfully brought to life through Vaughn’s dialogue. More importantly they are all strikingly original. Almost every single named character has something about them that makes them instantly memorable. Vaughn eschews the classic kick the dog tactic of establishing villains and instead gives all of his antagonists interesting back-stories and endearing qualities that make them easy to empathize with if not intensely likable. 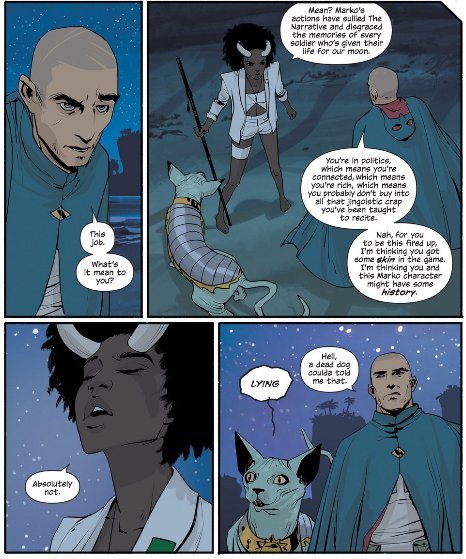 My favorite characters: The Will, Gwendolyn and the Lying Cat

At it’s very core, Saga is a story about an unlikely couple of star crossed lovers. Their home worlds have been at war for longer than anyone can remember, and their species hate each other so intensely they have co-opted most of the galaxy into a war effort to genocide one another. And yet, with a help of one trashy romance novel Alana and Marko find enough common ground to fall hopelessly and recklessly in love, elope together and have a baby. Seeing how, prior to their desertion, they have both been heavily decorated front line soldiers in the war, their romance is seen as a potentially damaging political statement by intelligence agencies on both sides of the conflict. Nearly simultaneously, but independently they decide to quietly eliminate the inconvenient family without alerting the public or creating political martyrs. The story is narrated by Alana and Marko’s daughter, who recounts the circumstances of her birth and the many hardships, dangerous adventures and narrow escapes her family endured. 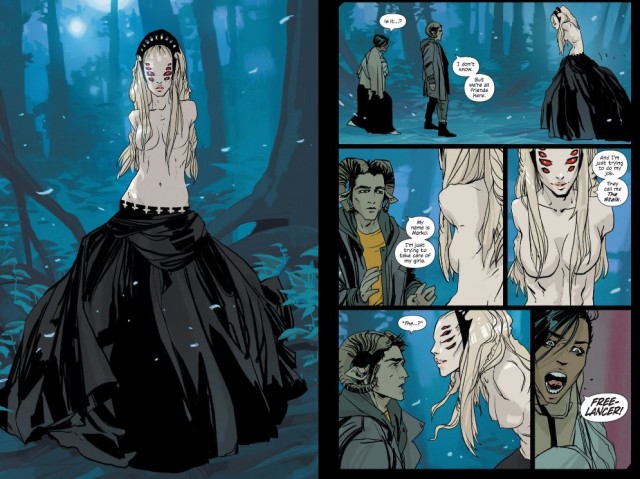 The Stalk is probably one of the most iconic and memorable villains of the series.

Their pursuers are often more interesting than the main cast. There is a robotic prince with a PTSD and a midlife crisis, a ruthless freelancer/assassin whose strong moral fiber and a big heart constantly get in the way of actually doing his job and a slew of other minor players all of whom are beautifully fleshed out.

One of my favorite parts of the series is the effortless, organic way in which it treats diversity. It is a big topic because of the fact that a lot of our media severely lacks it. Saga doesn’t really have any human characters (except maybe The Will, though it is never established if he is actually human or some human-proxy species) most characters are very human like. Marko’s race, for example are basically people with horns, and Alana’s are people with wings. But instead of making all of them look like white folks (or white folks palette switched to blue or green as it is often the custom) the authors instead create a vastly diverse cast. For example, Marko and his family have distinctly Asian features whereas Alana seems vaguely Hispanic. Marko’s ex-fiance who becomes a prominent (btw, Gwendolyn & The Will OTP) antagonist is unmistakably black. 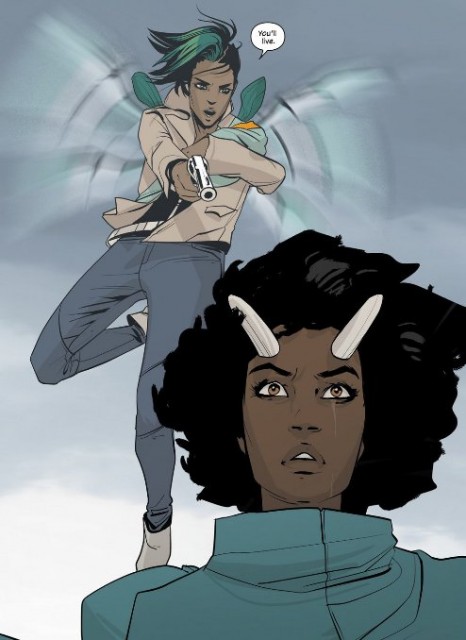 Saga is one of the few qworks of SF or Fantasy that actually acknowledges there can exist ethnic variations among non-human species, and uses that fact to enhance it’s character designs. The fictional people who populate the pages of the series not only come in all shapes and colors but also orientation. The two investigative reporters who are trying to cover Alana and Marco’s story are gay lovers hailing from a culture that is very prejudiced against homosexuals. The newest freelancer mercenary introduced in the latest issue is a fairly androgynous looking woman who dresses and carries herself like a hard boiled Film Noir detective sans the permanent five o’cock shadow.

None of this seems forced. Despite being a story of inter-species love Saga never really tries to be preachy or even appropriate. It is definitely R-rated, raunchy, violent, and irreverent comic. It does not pull it’s punches and it does not shy away from showing vice, brutality or prejudice. It’s characters are flawed, and they love, hate, make mistakes and sometimes do terrible things either by accident or out of spite. And that’s what makes it so great. 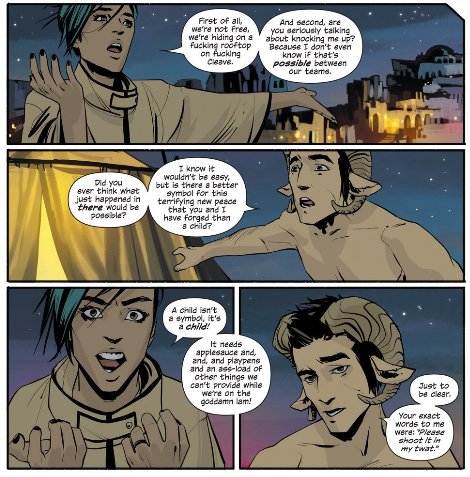 It is a roller-coaster ride of excitement and emotion and you don’t always know who to root for because you want the protagonists to succeed so that the story can keep going, but you can’t bear the taught of any of the antagonists getting hurt.

If you are in the market for a fun, exciting and strikingly original, fast paced story I highly recommend it. It is by far one of the best comic book series I have read in a while. Out of all the nerdy media I consumed lately, it was Saga’s characters that stand out the most. Plus I love the setting, which is a crazy mish-mash of science fiction and fantasy where magic, spaceships, anthropomorphic animals and robot royalty with CRT monitors instead of heads can coexist together without clashing thematically.

Also, can someone please tell me where to buy a Lying Cat, because I really want one.