Guardians of the Galaxy

Guardians of the Galaxy was surrounded by so much fan hype none of us could possibly have had reasonable expectations for it. Over the last few months a steady stream of teasers, reveals and info dumps have kept us giddy and excited. On the opening night my Twitter stream blew up with praise for the movie, and by the time I have seen it Friday night, I have already built it up so much in my mind that the experience was bound to be a big disappointment. And yet…

#GuardiansOfTheGalaxy is every bit as good as you expect it. The hype is true. Go watch it! #WeAreGroot

When I say the movie is great, I don’t actually mean it is some great cinematic accomplishment or a masterpiece of modern film. It is, at it’s core a pulp SF space opera designed to be an accessible summer blockbuster that doesn’t treat itself all that seriously. But as such, it excels. It is probably best of it’s kind. It is hands down the best non-avengers Marvel movie produced so far. I’m actually tempted to rate it above Avengers on my personal, very subjective scale because of the grand scope of the entire thing. Whedon’s movie is great, but in retrospect it seems tame and safe. It is firmly grounded, when Guardians are balls to the walls crazy. In a way this is the movie I have been waiting for my entire life: one that takes all (well, not all, but much of) the wildest aspects of the Marvel universe and just runs with them. Guardians of the Galaxy does exactly that: it delivers a fully realized pulp-SF universe, complete with larger than life villains, grand stakes and wacky locations. The best elevator pitch I could think of for this movie is Fifth Element meets Farscape as it embodies the best elements of these two disparate SF universes in terms of pacing, tone, character design & development as well as humor and team banter. 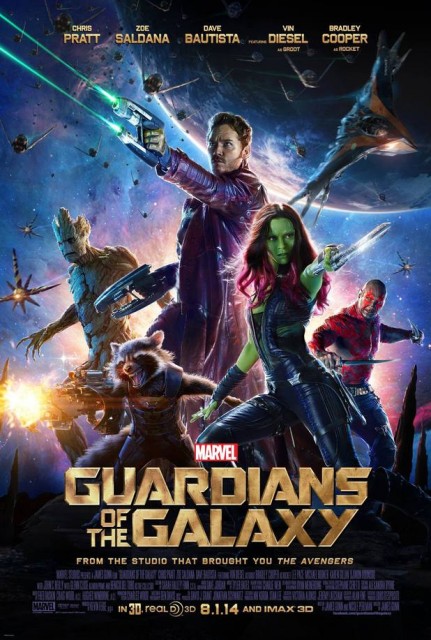 Guardians of the Galaxy movie poster

You may laugh at this comparison, but Peter Quill’s Stranger in Strange Land shtick is remarkably similar in execution to that of John Crichton minus the crippling ptsd, massive brain trauma and having your arch-enemy living inside of your head. And it’s not just the whole “aliens don’t get English idioms and pop culture references” thing. The movie uses similar techniques to build up the team and make us believe they are becoming friends, and puts similar focus on CGI characters that Farscape did on Henson’s animatronics. Rocket and Groot are not sidekicks or background decoration, but fully realized characters with their own arcs, much like Farscape’s Pilot and Rygel. If a movie makes me reminisce about my all time favorite Space Opera series, you know they are doing something right. 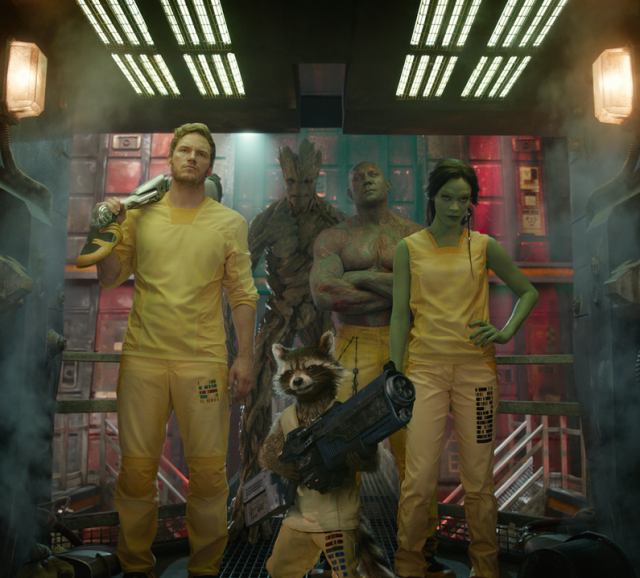 Guardians of the Galaxy

But, old SF series comparisons aside, the movie is… Well, just plain old fun. It is a pure joy to watch, unlike that one other movie I said I won’t review. It bucks the conventional trends and blockbuster standards: it uses a vibrant, warm color palette instead of being drab and realistic. It is exhilarating and genuinely funny instead of trying to be dark or gritty. It commits to fleshing out it’s characters giving them emotional depth, rather than painting them with broad strokes and using archetypes and stereotypes as a shorthand. Most importantly though, Guardians of the Galaxy has a fully functional movie at it’s core.

All the protagonists have their own arcs that the audiences can get invested in. They all have lost a lot, are poised to lose more, and come out better people in the end. The story the classic, 3 act heroes journey template complete with a spectacular grand finale, and a brief A New Hope style “everyone gets a medal” debriefing. It is expertly crafted with just the right amount of action beats, slow moments and comic relief to keep the momentum and engage the audience. As an action movie it is incredibly solid, and this is why it works. 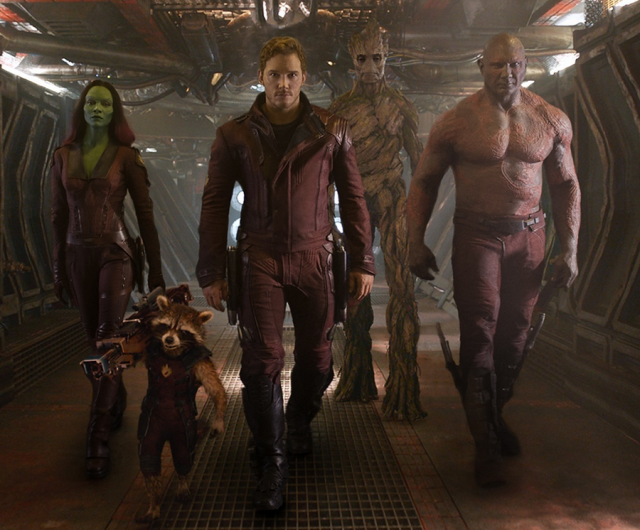 The Crew of Moya Guardians of the Galaxy

Conventional Hollywood wisdom says such a movie had no right to actually become a success because we don’t make grand scale SF movies like this anymore. We used to make imaginative pictures, but modern trend is to flatten the texture of a setting, normalize the characters and simplify narratives least Joe Public gets confused. Guardians of the Galaxy is a living proof that such attitude is misguided at best. If you make a solid movie with a strong emotional core and likable characters and clear conflict then the audience won’t be lost, even if they don’t really know who the Kree are, or are aware that “The Accuser” is actually a job title while “The Destroyer” is not.

A good movie can easily establish who are good guys, who are they fighting and what is at stake regardless of how exotic the setting might be with emotional framing, visual language and well written dialog. This is actually something the director James Gunn excels at. Anyone who watched Super can attest to the fact he can effortlessly go from funny to gut-wrenching to sad in the span of five seconds without altering the tone or breaking immersion. Guardians, of course are not nearly as dark but rather consistently funny and exciting.

I absolutely love the fact they chose to create this fully realized, vast space opera universe in which the events of the movie are merely a small local conflict. I think that a lot of credit for this ought to be given to Nicole Perlman who penned most of the story. It would be very easy to up the stakes and make Ronan the Accuser be a galaxy-wide threat, but she wisely resisted that temptation. She started small: at the beginning of the movie he is a local warlord with a personal vendetta who is mainly a threat to a single planet. Granted, when he obtains the power of an infinity stone he becomes a universe-wide threat by default, but he is not actually interested in conquest or domination. Ronan wants to destroy one world as an act of vengeance, and he doesn’t have any plans beyond that. I like it, because it plays directly into the idea that Marvel universe is impossibly vast and complex, that Earth is small and insignificant, and that destruction of a single planet is actually not a huge deal in the grand scheme of things. At the same time, a planet is a home to billions of people and saving one gives the Guardians an opportunity to establish themselves as genuine heroes. 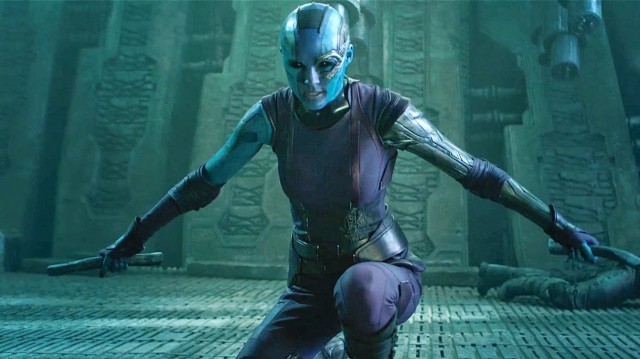 Granted, the story was written this way mainly because the movie is part of Marvel’s 14 year roll-out plan. Guardians get to fight a minor, local villain because the big bad Thanos is being saved for Avengers 3. If this was a stand-alone movie not tied to a larger continuity, they would probably have been fighting the big purple bastard himself. While it would have been much more epic, I’m not entirely sure if it would have made for a better movie. Because they were starting small and local, Guardians of the Galaxy could spend time on world building. It could afford to create this deeply textured, interesting and large universe that you can get lost in. Because they have focused on something relatively small, they made the external universe look impossibly large. It makes the Earth along with the Assgardian realms look like a small, backward province. Guardians of the Galaxy is full of exotic Marvel lore fans can explore at their leisure. Some people will watch the movie and then forget about it, but others will be hitting up Marvel related wiki’s to look up people, places or arcane artifacts shown on mentioned by the characters. It is not just a fun film, but a fully functional advertisement for the Marvel universe as a setting.

Let me put it this way: you know a movie did a good job world building when you immediately start thinking which Super-Hero RPG system you could use to run a Guardians themed campaign.

It would be a mistake not to mention the cast, which is basically a dream team composed of all my favorite people. Chris Pratt is always incredibly funny on Parks and Recs but here he shows he is adeptly channeling something in between Han Solo and Farscape’s John Crichton and it works really well. Dave Bautista is phenomenal as Drax giving what could have easily been a one dimensional character a lot of personal charm and gravitas. Zoe Saldana is great as Gamora and functions as a much needed sanity anchor for the off-kilter team of outlaws. Even though she plays the straight man to her wacky crew mates more often than not she does get a good deal of funny banter in between her spectacular action scenes. Karen Gillian is almost unrecognizable as the cold, menacing, but internally conflicted Nebula, the ironically least favorite but most loyal daughter of Thanos. Seeing her in Guardians makes me wonder how awesome Amy Pond could have been if she was an RTD rather than Moffat era Dr. Who companion. Michael Rooker was basically playing space-Merle, but then again I’m pretty sure that’s what he was hired to do so I have absolutely no complaints here. Bradley Cooper’s voice work on Rocket was on point, and imbued the little guy with the largest of personalities. Finally Vin Diesel should get some sort of a fan award for being a good sport and showing up on the set only to say “I am Groot” over and over again.

The writing, direction, acting and phenomenal special effects all come together perfectly to create the best movie of the summer. If you were planning to skip this one because it seems “too much out there”, you are basically passing on the most fun and consistently entertaining film since The Avengers. Give it a chance and you will not regret it. And if you have seen it, and hated it, I don’t think we can be friends anymore.