In Warhammer tabletop game most models move and fight as units anywhere between five and sixty models strong. To simplify the game, they are mounted on square bases that can be arranged into neat unit grids that look a little bit like this: 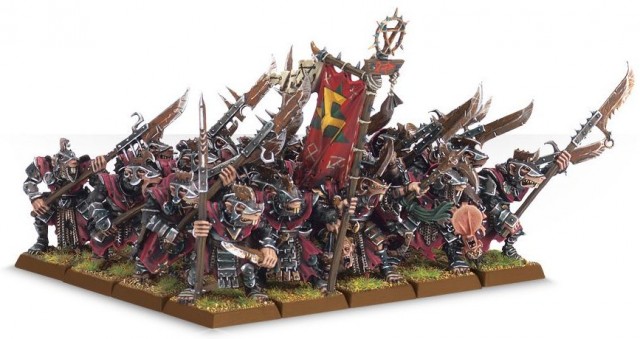 The unit above is actually kinda small for that particular army: Skaven are actually very weak troops so you usually want your units to be at least 30 strong, and if you can get away with it you want to set them up 10 models wide to benefit from the “horde” special rule. But I digress. As you can probably tell from the picture, moving such block of miniatures every turn is a non-trivial task. Repositioning models one by one will take forever, making an already slow paced game unbearably long and boring for your opponent. Pushing the back of the unit with a ruler and measuring tape doesn’t usually work well, because it causes models to crowd together and fall over. As a result most Warhammer players use “movement trays”.

A movement tray is basically a flat piece of paper, cardboard or plastic that you put underneath your models to facilitate movement. They are basically something you need to play the game and forgetting to bring enough trays to a game usually results in a mad scramble to find paper/cardboard and scisors to make them on the fly. I actually made an online service that lets you print out paper trays ready to be cut out to save you the time and effort needed to trace and measure stuff. Granted, most people prefer to have more permanent movement trays made out of something more solid than a piece of paper.

Since the game is a modeling hobby, many players opt to make their own trays out of various materials. For example my brother cuts them out of PVC tiles and then flocks and paints them. I tend to be rather lazy and have no patience for cutting, filing and trimming square slabs so I typically take the easy way and buy trays.

If you are in the market for trays there are many options available for you as there are many third party vendors that make them. Most of the pre-made trays you can buy typically come in select dimensions that correspond to most common unit sizes such as 5×5 or 6×5. Many also try to make products that can be used for both the 20mm and 25mm bases (both of which are common in Warhammer) usually resulting with a rather narrow selection. Games Workshop sells their own branded modular set that lets you build your own trays, with a minimum effort: 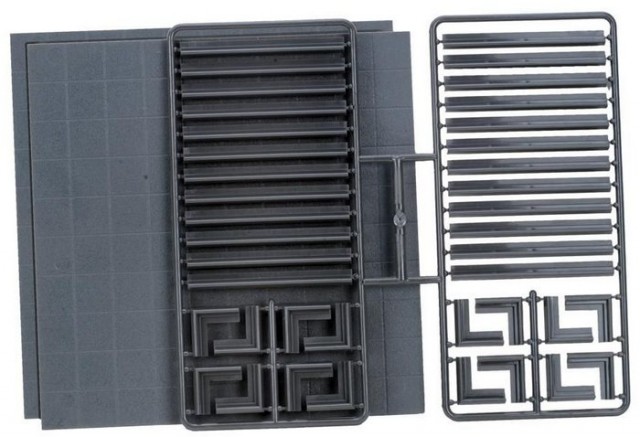 This is a very nice option, but unfortunately it does require a lot of cutting and measuring. The borders stoppers that you stick around the base to prevent models from sliding off are rather oddly sized. For example, the most common base size in Warhammer is 20mm, and the most common unit configuration is twenty models arranged in 5×5 square. You would think that they would manufacture their set in such a way that it would merely require cutting the base to size, than taking 4 corner pieces, and 4 border stoppers and gluing them around. Unfortunately the pieces are half and inch to long and require you to trim them to fit together. If you want a “perfect” tray you will have to spend a lot of time measuring, cutting and filing them down to get a seamless fit. If you eyeball it and just clip the piece, you end up with small gaps that don’t actually affect the function, but don’t look very pretty.

Since I am super lazy and always on the lookout for things that can enable me not doing to much work, I have recently discovered Tectonic Craft Studios – a company that makes custom, laser cut movement trays out of medium density fiberboard. The company was successfully kickstarted (kickstartered?) back in 2012 as a terrain manufacturing startup, but they have since expanded their offering to Warhammer movement trays, 40k tournament racks and more.

The neat thing about their tray selection is that they are fully customizable. The online store lets you specify the base size, number of ranks and files and then a custom cut tray is going to be sent to your house. I purchased a number of trays in various configurations and I must say I am really pleased with their quality:

The MDF is a surprisingly good medium. It is light, but dense. The trays feel very solid, but still slide around the table quite easily. They come scored with a grid that makes arranging the miniatures easier after removing casualties. The raised border fits snugly around the bases and it is tall enough to prevent the models from sliding or tipping off, but not to obscure the legs or base finish.

Tectonic Craft Studios currently sell trays for every common base size: 20x20mm infantry, 25x25mm large infantry, 40x40mm monstrous infantry, 25x50mm cavalry, 50x75mm monstrous cavalry and even the 40x100mm chariot bases. They can all be cut to your specifications. For example, this is how a regular, single rank, cavalry base looks like with models on it: 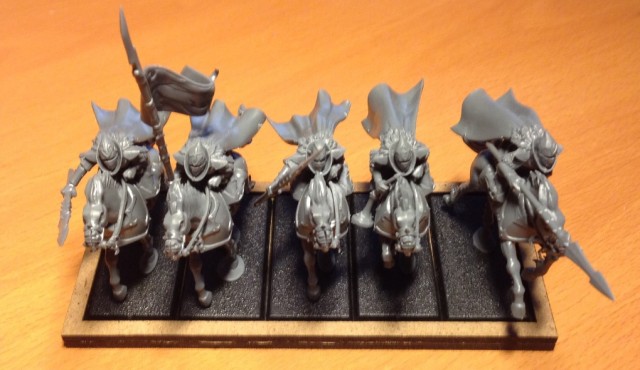 My favorite product however are the skirmish trays. In Warhammer units with the skirmisher rule do not use the usual grid, rank and file formation. Instead they are to be deployed in a “lose” formation with models no further than 2″ apart. This means you typically have to move them model by model since there was never an easy way to arrange them on a movement tray… That is until now:

Some might dislike this arrangement since the models are still positioned aligned to a grid and many players prefer to use more organic formations. I personally like it, because it fits with the 8th edition rules that stipulate that even in bulbous, random arrangement skirmishers still count as having flanks when it comes to combat. My armies are not usually very skirmish heavy, so I really appreciate this neat little invention that keeps my models in the 2″ coherency, and at the same time lets me move them with ease. 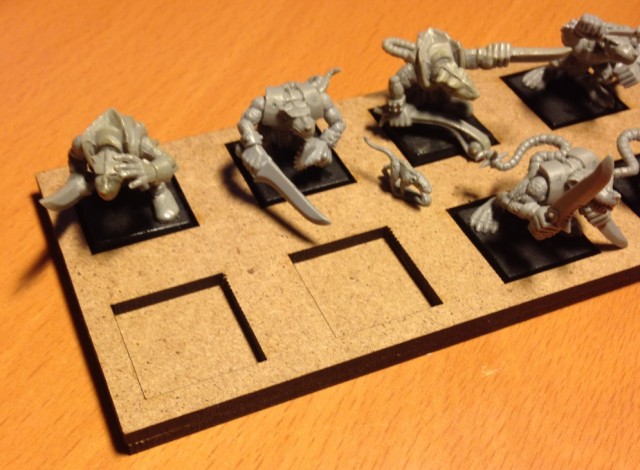 As you can see in the image above, the skirmish trays are perfect, snug fit for the 20x20mm bases. There is very little play, and the models stay in place even if you pick up the tray by one end and lift it all the way up. I only ever use 20mm skirmishers, but I was pleasantly surprised that the store page lets you bump the size all the way up to 50x75mm. I don’t even know if there exists a skirmisher unit that large (probably Ogre Kingdoms unit) but if you have one, you can buy a tray for it.

Update Jan, 2015: Customer service is top notch. Recently I sent them an email asking if they could create custom sized movement tray that was larger than the sizes offered on their page, and they added those sizes to the online store within the next few hours.

Now onto the bad stuff:

The production time for these trays seems to be somewhere between 2-3 weeks. It seems a bit long for what essentially is cutting squares to known dimensions, but I honestly don’t know their process so I won’t judge. The web store sends you an automated email confirmation but beyond that there is no way to check on the progress of your order, and there are no follow up shipment emails. The only way to check up on your order is to email the owner (you can do that by simply replying to your order confirmation) who, to his credit, responds to every email in timely manner and is very accommodating.

Update Jan, 2015: The company recently started sending out automated shipping notifications. The emails do not include a tracking number.

So far I have placed 3 orders with the company and the turnaround time was the same for all of them, though the owner assured me it is not actually normal citing personal issues, trouble with post pickups and a big order backlog as the reasons for the delays. I honestly don’t know if that’s true, but seeing how Tectonic Craft Studios seems to be a one man shop, I actually have no problem with 3 week production time as long as I know that this information is communicated to me up-front. Which is why I’m putting it in this review: not to knock the shop down, but to warn potential buyers to be patient.

My main complaint would be the packaging. The trays were shipped to me in a plain cardboard UPS envelope with no padding. The trays themselves are very sturdy and the material does not scratch easily, so they survived undamaged. Still, a little bit of padding (a padded envelope, or a sheet of bubble wrap would be perfect for this) would go a long way. The individual trays were not sealed or packaged in any way. Shrink wrapping them, or at the very least sealing them in labeled ziplock bags would actually give the operation a much needed air of professionalism.

The trays themselves are really neat, and worth overlooking long production times and a bit unprofessional packaging. They look great on the table, they can be painted with Citadel paints quite easily, and they are quite affordable. Unlike the packaging, the actual quality of craftsmanship on these pieces is really high so I highly recommend them.

This entry was posted in rpg and tabletop and tagged review. Bookmark the permalink.