Recently I have been shopping around for a new Sorceress miniature for my Dark Elf army and I realized that I didn’t really like most of the existing games workshop miniatures. I read a really great piece of advice with regards to character creation that I really took to heart. If you’re a man and you are trying to create a compelling and interesting female character you should ask yourself whether or not you would want to be her. Not whether you would want to date her, or impress her, or protect her or anything like that. Many writers fall into this trap of treating women as these mysterious “others” who don’t have a direct relationship with the audience and their feelings and thoughts are communicated only by filtering them through the eyes and ears of the male protagonist. If you want to have an awesome female character, she needs to be an actual person with her own story arc, needs and goals independent from those of the male protagonist. Furthermore (and that’s crucial) she has to be cool and interesting enough for you as an author/creator to identify with.

Granted, I wasn’t creating a fleshed out literary protagonist, but merely imagining some background fluff for my tabletop general. So a lot of the above does not necessarily apply. Still, I kinda wanted a miniature that would represent a strong, independent Elf woman who is both feared and respected by her underlings. I wanted her to be a graceful and distinguished but also ruthless and intimidating. In essence I kinda seen her as Cersei Lanister, if she had magic powers and a personal army at her disposal and no one in particular to answer to. Or maybe an evil Galadriel who has fully succumbed to the lure of the ring. That’s the kind of character I had in mind.

This is more or less the mental image I had of her: 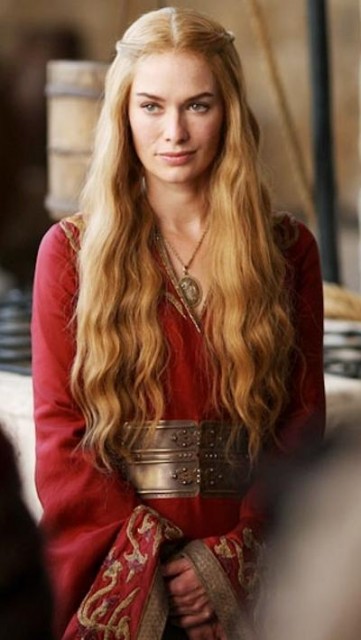 The basic idea behind her is that she is a highborn sorceress with a lot of power and influence. She is as much a magic user as she is a shrewd politician and a power player in the Nagarroth court. The rather subtle dress Cersei is wearing in the picture above would be a perfect representation of what she would wear on a regular basis. It looks expensive, but is not extravagant showing off her status, without really flaunting it. She eschews elaborate, full-on mage gear because she does not need to telegraph her power. People know her face, and know her reputation well enough to show proper respect or stay clear.

I figured I would just grab the model labeled “Dark Elf Supreme Sorceress” from the official Games Worlshop website because that sounded about right. It sounds like someone with a lot of power and gravitas. Unfortunately, this is how the model looks like: 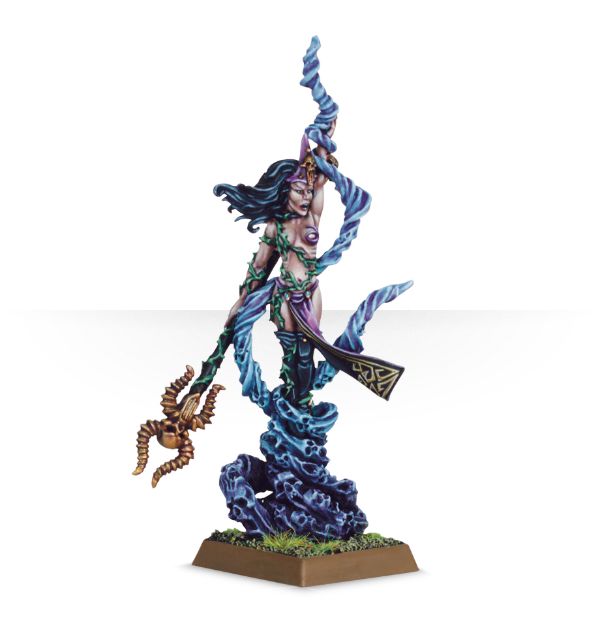 I have a whole number of issues with this miniature. For one, it is a prime example of the “dynamic pose” thing that Games Workshop has been doing lately with varied success. Many of their new miniatures are sculpted in such a way as to convey sense of movement. When it works, it looks really cool. Other times, it falls flat – like on the Supreme Sorceress. I have no clue what does the smoke/mist snake thing is supposed to represent and frankly, it looks quite silly. Not nearly as silly as the damage Slave Leia outfit she is wearing. Can someone explain to me why does it come with only half a bra?

I might be wrong here, but I don’t think her attire is in any way practical or empowering. I have a hard time imagining the Dark Elf version of Cersei (let’s call her Xersei) that I just made up in my head, actually choosing to show up to battle like this. Another sorceress might actually find this attire cool, but I think Xersei would rather wear something more comfortable and warm (Dark Elf homeland Nagarroth is also known as The Land of Chill, and not because they are laid back people, but because it is a permafrost tundra and ice wastelands). She would go for something that would show of her wealth, power, status as a noble born and a magic user, rather than maximize skin exposure and sexiness because I consider these things more integral to her identity. 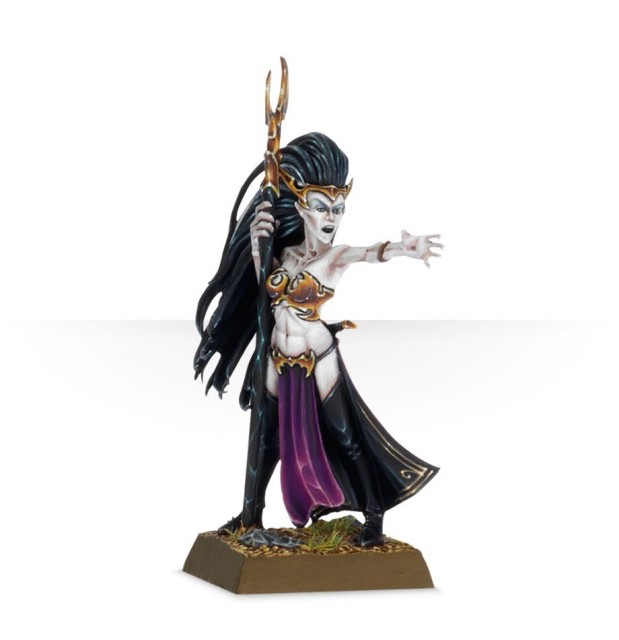 I have very mixed feelings about this model. On one hand, I really like the static pose, and the subtle gear. One of my ongoing complaints about the Dark Elf sculpts are the out-of-control, extravagant head pieces that I usually clip off or file down. I’m all about the simple looking magic staff, and the very subtle head-gear on this model.

On the other hand, I have same complaint as above: I just don’t think this is the right fashion sense for my Sorceress given the head cannon I made up for her. She could perhaps be an apprentice – a secondary level 2 mage in the army or something. But not my cunning, ruthless aristocrat Xersei.

So, does Games Worshop sell any Dark Elf sorcerer models that are fully clothed? Well, there is this old sculpt from the 90’s: 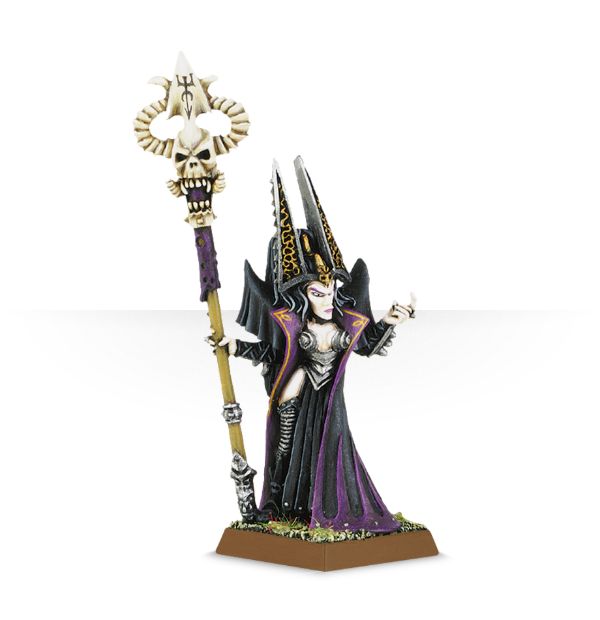 This is much better. The cloth to skin ratio seems about right at the first glance, thought if you look closely enough you will notice that the sculptor could not resist actually having her entire leg poke out from the folds of her cloak for added “sexy”. In fact, I think he tried so hard to get as much of leg surface exposed I think he actually broke her anatomy. There does not actually seem to be enough space between where her waist ends, and the leg starts to account for hip bones. So her cloak is either a trans-dimensional portal of some sort, or she has the extra-special super-heroine anatomy rightfully mocked by Hawkeye Initiative, Escher Girls and similar blogs.

I am also not very fond of the Madonna styled conic bra thing she has going. In fact the entire outfit is too Maleficent, and not enough Cersei for my taste. Which reminds me, I should get around to watching Maleficent, because I heard it is actually slightly not terrible for the most part.

While this is the closest we got to what I wanted so far, it is far from perfect. I actually own this model, and my goal was to replace it. The extra-ordinary anatomy, mega-shoulder-pads, cone-bra and crazy head-gear aside, I’m not actually very font of the facial detail on this model. Unlike the two miniatures featured above, this one was hand sculpted rather than computer generated. Working in 28mm scale using Green Stuff™ as your primary scuplting medium is not easy and in the 90’s warped or lop-sided faces were a common problem on elf and human models (not so much on Dwarfs who typically had larger faces, and bushy low detail beards that could be used to mask any defects).

Perhaps I was looking in all the wrong places. Dark Elf army book actually includes rules for Morathi, the most powerful and influential dark sorceress of them all. She is actually one of the oldest living beings in the Warhammer universe, and some say she is actually the true ruler of Nagaroth (and that her son, Malekith the Sauronesque Witch King is merely a figurehead). Out of all the miniatures in the Dark Elf range, hers should have the right mix of power, gravitas and grace… 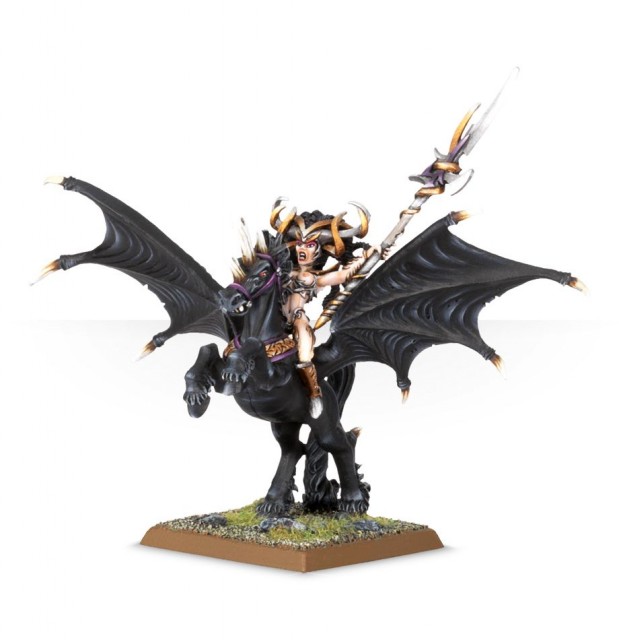 Nope, never mind. She is also wearing an armor-plated bikini, because of course she would. I don’t even know what I was expecting.

There is one more sorceress model in the range I didn’t show you which is probably the best of all of them: 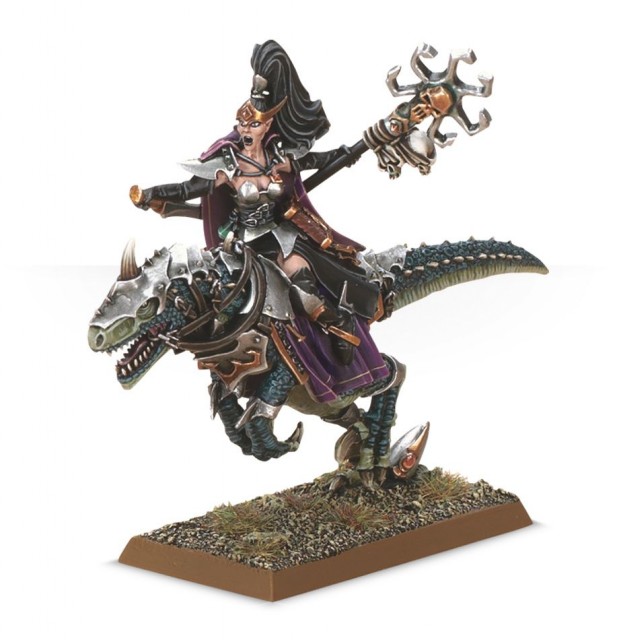 Sorceress on a Cold One

She has an almost functional armor, and a strong Xena Warrior Princess vibe to her, which isn’t actually a bad thing. She would make an excellent battle worn, front line mage. That said, I was still stuck on my Xersei idea. Also, I didn’t want to put my Sorceress on a Cold one because she would typically be embedded in a big infantry unit or running around on foot.

This, by the way is the entire available range of Dark Elf magic users. What really irks me about it is how one note all of them are. I do understand they are trying to make the miniatures unique, and so they are all highly stylized so that when you put a Dark Elf Sorceress, a High Elf mage and a Woof Elf Spell Singer next to each other there would be no question which is which. So they do need a distinctive art style. I just don’t like the one they chose.

All of these designs are designed for male gaze. Their attire doesn’t make any sense fluff wise. For one, Nagaroth is a cold and windy place, and male models are usually sculpted wearing heavy, layered clothing and/or fur under their armor. For example, check out this Dreadlord miniature: 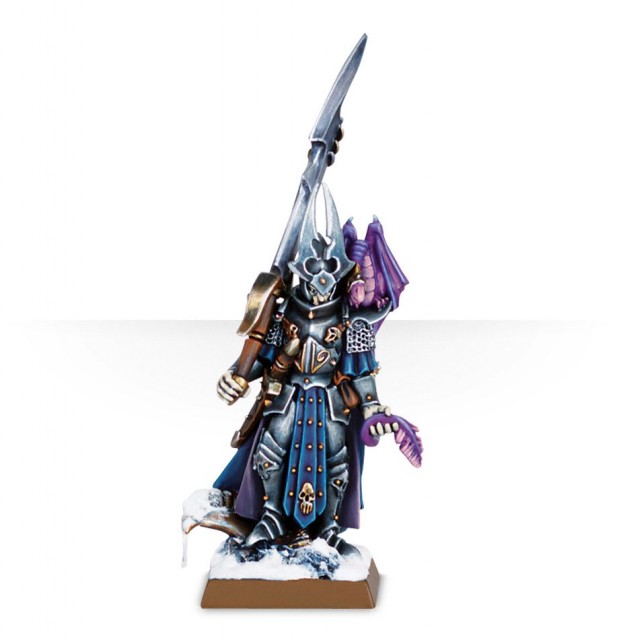 This guy is all bundled up underneath his plate armor, and his base is modeled to mimic snow and ice, which are common in Naggaroth.

Secondly, Sorceresses are typically wealthy, affluent and powerful, so one would expect them to wear warm ornate cloaks rather than run around half naked. Nearly all the women in the Dark Elf range are depicted as wearing these skimpy metal bikinis, and it’s for the sole reason of titilating the men and boys who are presumed to be the core consumers of the game. We can discuss Witch Elves and Harpies at some other time maybe.

Funny thing is, when I searched outside of the Games Workshop range it was actually trivial to find a model that looked exactly the way I wanted: 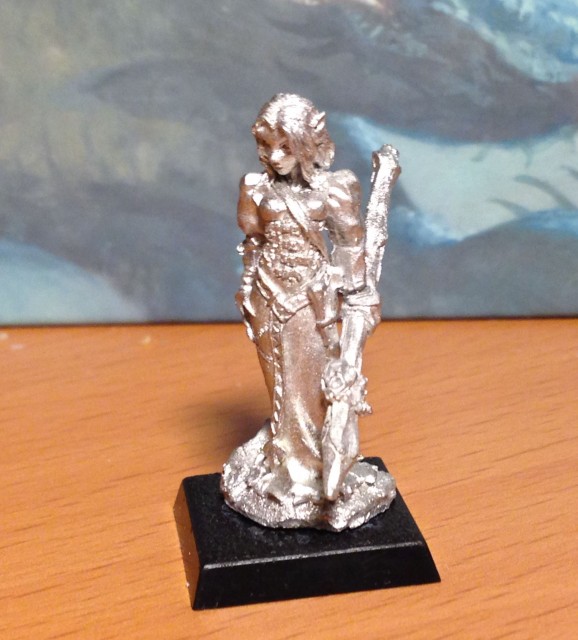 This one is made by Reaper Miniatures and it gives off the exactly right vibe. She is wearing a rather simple, but still rather expensive looking dress with some fancy ornaments. She is carrying a magic tome, and a simple staff crowned with a menacing looking skull and some dark crystal that can be painted to look like it is giving off a sinister glow. The evil looking staff and the claw-like appearance of her free hand telegraph the fact she is definitely not one of the good, kind elves. It’s perfect.

So it is not impossible to make an interesting Dark Elf model without resorting to a skimpy chain-mail bikini. The Cold One sorceress is a good example of that, and this one is another. With five available models in the range I just wish there was a bit more variety.

You should note that I am not saying all of this to be a prude. I am refraining from passing a judgment of whether or not the loin-cloths and half-bras are “appropriate” or “respectable” because it all really depends. Besides, who am I to try to pass judgment or police what women choose or choose not to wear. All I’m saying is that none of these models felt right for the character I made up in my head, who in turn I heavily based on another character in a popular Fantasy series on TV. None of them screamed Cersei at me. But perhaps it is unfair to criticize a limited line of models for not having the exact miniature you think you want.

Here is the thing though: if you look at all the available models together, and compare them to for example male characters for the same army, you will notice certain patterns emerging. So really, I just want you to notice them and ponder what do these patterns say about us (the Warhammer players), and our hobby.