Let’s talk about character sheets for a second. About a year ago I stumbled about a short and interesting blog post in which Jeff Rients asked his readers what “non-mechanical” information they like to put on their character sheets. I found it a pretty interesting conversation back then, and made a note to circle back to it one day on my own blog… And that time is now apparently. This, ladies and gentlemen is how deep my draft queue goes.

Most character sheets in standard, more simulationist games typically have something like this on the back: 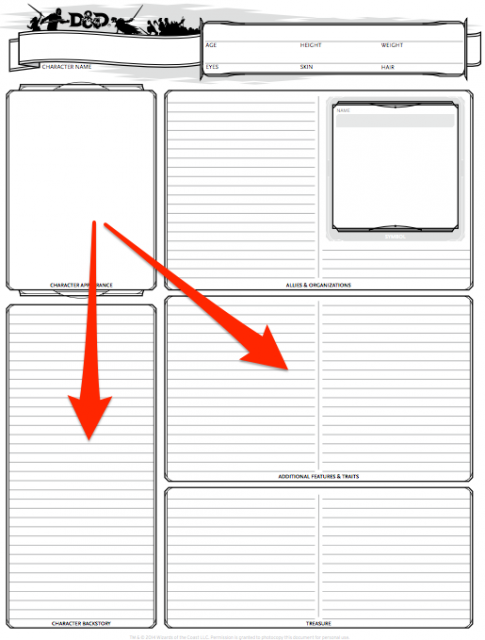 There are empty spaces on the back for the players to fill out with “backstory” or “character traits”. Unless you are playing a more narrativist type game these will often get ignored. The players will either leave them blank, or scribble down some very basic stuff (like name of their father, so they can go the whole “Gimli, son of Gloin” thing). Every once in a while a player will bring a 6 page backstory which is essentially a bad novel that the GM does not want to read. So everyone just ignores that part of the character sheet and pretends it does not exist.

But it does not have to be that way. I think it is sometimes nice to borrow tools from the narrativist toolbox and spend a little bit of time adding non-mechanical details to the characters. And not just for fluff and flavor. I think these details can be useful for both players and GM’s alike.

Looking at the list Jeff compiled in his post I identified several functional categories that can be used in different, creative ways.

These can be used as role playing aides for people who don’t usually role play much. Or rather they role play by latching onto the standard tropes for their class or race. So they are the elf who wood elf who grumbles about going underground, a dwarf who complains about stupid elves, a barbarian who lives by a code of honor and etc… But what about things that are not related to their race, or class?

It is sometimes hard to come up with an interesting character concept, but if you as a GM give the player some options they could end up with some interesting combinations.

So for example, you could have a Dwarf Fighter who hates snakes, despises rabbit stew, is partial to elven blueberry wine (in addition to a proper Dwarven ale of course) and dreams that one day he will get to fight against a powerful Necromancer like the legendary hero Skalf Blackhammer whom he idolizes. It’s almost a fully realized character, and all you had to do was to pick three or four likes/dislikes from the list.

The benefit of setting these things up with the group at the character creation is that it also allows the GM to set up comic relief moments and other party members to play of each others traits. For example, there might be a running joke of every visited tavern having a rabbit stew special or something like that.

These are perfect adventure hooks or freebie NPC’s the GM can use during the campaign. In my experience as a player and GM I noticed that it is often necessary for players to encounter someone from their past as part of an unfolding plot. In such circumstances the GM usually just invents an NPC on the spot. But if each player spends 5-10 minutes coming up with two or three people “they once knew” at character creation the GM may actually have a nifty list of people he can utilize that way. Players on the other hand will feel like their characters are actually more involved in the game world.

It’s usually best to keep these entries somewhat vague so that they can be filled out during actual game play if needed. On the other hand you typically want a wide variety of different characters to choose from to avid the usual “parent #1 and parent #2 plus sibling” trap. Here are some relationships players may want to jot down in their backstory section:

Each character will only need maybe one or two of these, and each person should aim to use a different one so you have a wide variety of back stories.

One trick I sometimes use when I start a new campaign is to ask players to come up with a Homeric Epithet for their characters. These used to be memetic devices used by the Greeks that helped them to memorize their complex epics, and were used to pad the content so that it rhymed or maintained the meter and timing. By their very nature however they were loaded descriptors that usually conveyed some crucial information about the character. Like Fleet Footed Achilles conveyed the heroes swiftness, power but also foreshadowed his fate.

The stuff players write down on their sheets does not need to be that loaded. Typically a single word adjective is fine. Stuff like: strong, wise, cunning, brooding, fast talking, etc.. For best results, ask players to pick an epithet that does not relate to their class. So you can get an interesting stuff like “cunning barbarian”, “roughneck wizard” and “wise rogue”.

Going even further with that trend, it might be a good idea to completely disconnect these “traits” and “quirks” from the character class, race and concept and simply treat them as fluff. Instead of an epithet each character may pick one or two physical or outward traits from this list:

All of these would be things that are obvious. It’s the kind of things a stable boy would use to describe your characters to the city guard investigating a recent burglary committed by your party.

I usually like to assure players that if they pick an “accent” or a “nervous tick” they don’t actually have to role-play it if they don’t feel comfortable doing so. Accents are considered automatic – the NPC’s will notice them, whereas involuntary ticks can be declared either by the GM (when appropriate) or by the player if they want to. Some tells or ticks can’t even be roll-played at all. For example how do you role play a “throbbing vein on your temple”?

I like to call this category “job interview questions” because they include the kind of shit you might get asked by an interviewer who wants to see how you are going to squirm out of a question that has no good answers. But in this case you are not trying to get a job so you don’t need to make your character look good. It is an easy way to add “character flaws”: things your character regrets, seeks redemption for or wants to forget. Or these could be things that drive you – things you seek or want to achieve.

A lot of these can be used as potential adventure hooks. What if the potential quest given heard about your shameful failure? What if you have to overcome your biggest flaw?

Knowing what drives, ambitions or flaws each character has also allows the GM to create a relevant carrot and stick scenarios. For example, there is no point of offering mountains of gold to a party whose members don’t care much about wealth and are instead motivated by a desire to become famous heroes, or to redeem their past sins.

Finally, here are some “loaded questions” you can ask the party as a whole. These can be easily used as a “team building” exercise and an explanation why all these different characters became adventurers and how they become together.

For example, all of them might have been banished from heir respective home lands for different individual reasons but the experience of being exiles is what binds them together. Or perhaps they are all survivors of the same cataclysm? Perhaps hey all were involved in something shady and it went bad?

What non-mechanical information would you put on your character sheet? What questions do you think are interesting to ask players about their characters during the first sessions? What helps? What is more trouble than it’s worth? Let me know in the comments.


One Response to Non Mechanical Info on Character Sheets