I have built up a SF book review backlog that’s dangerously close to going into double digits, so I need to start knocking them down. First up on the chopping block is Clade by Mark Budz which is a book I feel like I read before under a different title and written by a different author.

About a year ago I wrote a gigantic 3 part review of Jacek Dukaj’s mega-anthology King of Pain. It was a huge, encyclopedic size collection of short stories and novellas, chief among which was The King of Pain and the Grasshopper. I wrote about it in part 2 of my review and while it was not my favorite story in the set, I genuinely enjoyed it. I’m bringing it up because at the core it is had the same basic premise and Budz’s novel: it also depicted a world in which a cutting edge biotechnology allowed our species to self-segregate into distinct, non-compatible biological clades hyper-adopted to artificial environments. Dukaj took this idea and kept winding it up until he produced a story about a sort of bio-warfare waste accidentally jump-starting a brand new, fast evolving, hyper adaptive alien life and eventually a kind of biological singularity. Budz on the other hand is more interested in writing a Bio-punk techno-thriller. 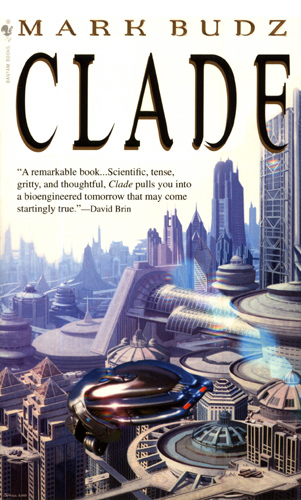 Both authors however start with the same idea: a chain of man made eco-disasters makes the planet near inhabitable forcing humanity to use aggressive bio-engineering to create brand new versions crops and livestock that can survive on a planet ravished by pollution, corporate chemical warfare, and fast mutating rogue commercial retro-viruses. Come to think of it, Paolo Bacigalupi also started with this premise in his Windup Girl but he allowed the civilization to fall, and then wrote about the survivors. Dukaj and Budz both assume human ingenuity can not as much save the planet, but re-make the nature to the point where it can be reigned in and controlled narrowly avoiding apocalypse. The former, explored a setting in which the exponential progress curve is not tapered by the ecological near-apocalypse and new disruptive technologies keep pushing the environment towards another collapse. In Clade the ecological collapse is a wakeup call which results in heavy regulation and tight corporate control yielding a return to stable ecology at the cost of social upheaval.

Dukaj is a bit old school in that he believes that the only entities with enough resources to survive global biosphere collapse are heavily industrialized first world nations. The major superpowers seal themselves against the outside world and employ a kind of genomic frequency hopping to protect themselves from rampant, inexpensive bio-terrorism. Budz, much like Bacigalupi does not believe that the traditional nation state notion can survive in a post-ecology world. He sees old power structures fold and the factual power rests on the corporate backbone that underpinned and financed them. It is corporations that re-shape and re-make their environment, and it is human greed (rather than fear, nationalism and xenophobia as in King of Pain) that shapes the new social landscape.

Your clade is determined not by citizenship, but by your class. You are claded for the job you do, and the neighborhood you live in. Unlike Dukaj’s post-apocalyptic vision of sequence-hopping biospheres, Budz’s Earth is still a global village. As long as you have the money you can travel and go as you please. If you are a blue collar worker, or an unemployed slum dweller however, the “nice neighborhoods” are off limits to you – your body is simply won’t survive there. Don’t even think about stepping into a high end Gucci or Armani boutique unless you want to be coughing and pissing blood for the next few months (provided security guards can drag you out before you go into anaphylactic shock). In fact, even loitering outside the store will probably give you a bad rash. Need to go to a rich neighborhood for work? Don’t worry, they’ll temporarily re-clad you. Just remember not to kiss your wife because she might have a bad reaction and die. As visions of future go, this one is pretty grim, but not hopeless.

Out of the three post-ecology I mentioned, Burdz’s is possibly the most optimistic one. The environment, though far from healthy is stable. The economy is booming. The protagonist is a low wage latino bio-tech support worker cum gardener whose task is to take care of special vegetation genegineered to be used by orbital mining and research colonies. This job was his big break, and he hopes to use it to escape the slums where he grew up. He is an ordinary guy with big dreams and a lot of ambition, and eagerness to impress his supervisors which makes him a perfect pawn in a game of corporate espionage and sabotage.

Budz borrows heavily from the old-school Cyber-punk tradition but makes it feel fresh by imbuing it with modern sensibilities, and replacing clunky and ostentatious plastic and chrome with subtle bio-tech and nano-machines. Instead of Gibsonian cyberspace he describes ubiquitous social networks, and idiosyncratic, self learning, personal assistant AI’s whose buggy programming has them grow neurotic and ever more capricious as they get closer to approximating human personalities.

Unlike Dukaj who chases after the big ideas big payoffs, Budz takes time to flesh out his characters, explore their world, and touch upon the social and racial tensions in a world where social mobility is biologically impossible and the clade system is used as a tool in class warfare. Highlighting these tensions is not his focus though. He is more interested in creating a high-stakes techno-thriller adventure in which the little guy sticks it to the man and gets rich at the end. And it’s a pity, because his version of post-eco-collapse world could have been used for some much deeper and heart-felt exploration of the contemporary social issues. If you’re looking for that, then Bacigalupi is your man. If you want high-concept unrestrained singularity-edge SF go with Dukaj. What Budz delivers is a fun, entertaining adventure with likable characters and couple of memorable set pieces.