Alien: Isolation is a fascinating game because of the circumstances that lead to it’s creation. It came on the heels of Sega’s infamous Alien: Colonial Marines title which was a spectacular disaster. A game that was not only the worst game in the alien franchise, not just the worst game of 2013 but possibly the worst game of all time. But the core concept for Isolation actually predates that fiasco. It was initially a tiny proof of concept ga,e developed by a six man team from the Creative Assembly studio responsible for the Total War strategy series. It was pitched to Sega as an a hide and seek multiplayer title in which a team of mostly powerless humans would try to escape from a map prowled by a indestructible alien. The game was already in production when Colonial Marines crashed and burned. When it became clear the franchise was irreversibly damaged by the buggy, unfinished and unplayable installment, Isolation became their rebound vehicle. It was how they were going to bring the franchise back to life. 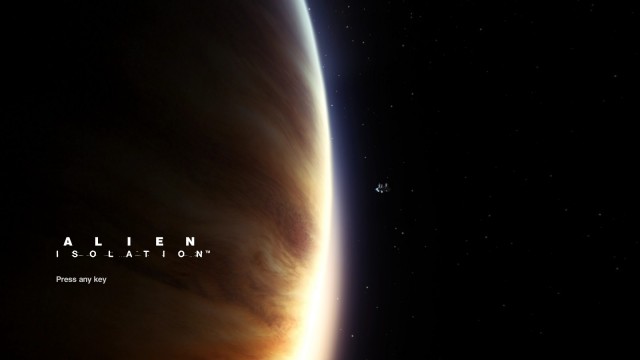 The end result of Sega’s no expenses spared approach to the game is a product that is not only well polished but visually striking. The creative team behind the game worked really hard to capture the evocative look and feel of the 1979 film. This involved modeling the titular Xenomorph on the original H. R. Giger design (the one with a semi-transparent head that revealed a partly obscured skull) and using a lot of original concept art, photos, set design documents provided to the studio by 20th Century Fox. The general rule of thumb was that if a weapon, tool or a set prop could not have been made using 70’s technology than it could not be included in the game. The team even reproduced the film grain effect, and made artificial visual distortions appear on the screen from time to time, to emulate the experience of watching the original movie on an old VHS tape, which is probably how most of us experienced it for the first time. 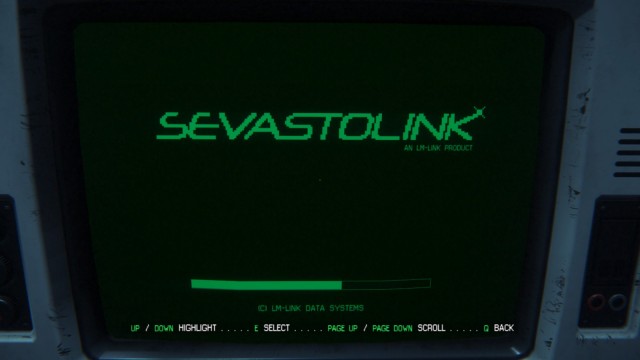 All the computer terminals use these big bulky monochrome CRT monitors and the menus make genuine floppy disk noises.

This attention to detail pays off big time. The game genuinely feels very retro. The hyper sleep chamber you wake up in at the start of the game feels as if it was ripped out straight from the movie. I really like this sort of aesthetic, and I wish we saw more of it in games and movies. The retro feeling wanes a bit as you progress and find yourself crawling through the inevitable air ducts, warehouses and sewage systems. There is unfortunately not much you can do to make such places feel retro which is why I would avoid them. But I can see how they had to be included in a game about running away from an angry alien on a mostly abandoned and dilapidated space station.

Other than the superb visuals and art design, the game has two main strengths to me. One of them is of course the game’s signature survival stealth mechanics. I can honestly say that the Xenomorph in this game is the best incarnation of the creature since the original movie. All of the films, games, comics and other media featuring the beast have failed to capture just how strange, intimidating and relentless it really was. Alien: Isolation nails it. I have not seen a single video game enemy to have this sort of impact not only on the game play but on the mood and pace of the game since… Well Amnesia: Dark Descent. But I’d say that the Alien is actually done better than the Amnesia monster because you are not supposed to turn your back on it. The Amnesia creature was a scary blur that you avert your eyes from because it is to terrible to observe directly. The Xeonomorph is scary, but you must constantly keep tabs on it. The creative team spent a lot of time working on it’s walk cycle and movement. The creature even has dedicated tail physics which allow it to knock things over as it walks around.

I usually hate not having a save anywhere type system in FPS games but Alien: Isolation security panel based saves actually worked well to build tension. The save points are typically placed often enough not to be annoying and the game does a good job using reasonable checkpoints at important moments to avoid losing progress. That said, saving is always a gamble as it forces you to stand still for 30 seconds in the open when there is an invulnerable, indestructible alien on the loose. Like everything in this game it is a tradeoff? Do you risk exposing yourself to save your progress, or do you keep to your cover and forge ahead to the next save point which might be in a safer, more concealed spot? 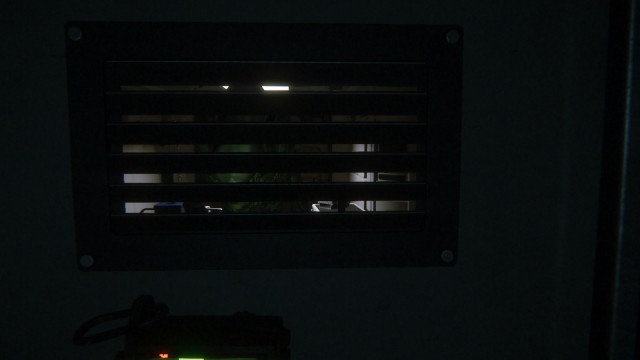 Your motion tracker actually makes noise, so you can’t use it when the alien is near by.

The attention to detail exhibited in the set and character design, extends to the stealth game play. There are little things that are perfectly logical but surprising when you first discover them. For example, the motion tracker you can use to check the position of the alien (or other enemies) emits a constant stream of bleeping sounds when in use. Despite what you might expect based on your experience with stealth games, these sounds can actually be heard by the alien as it searchers for you. So when you are hiding in the closet, you need to put the device away as soon as the creature walks into the same room, or else it will hear it and make a bee line straight for you. Things like that add up to an incredibly tight and well executed experience.

The game’s second big strength is it’s protagonist: Amanda Ripley. I have to admit that overall voice acting in the game is a little bit sub par. It’s by no means terrible, but I have seen better. That said, I think Amanda is possibly the best strong female protagonist since Faith from Mirror’s Edge. And yes, I am including the new Lara Croft on this list. 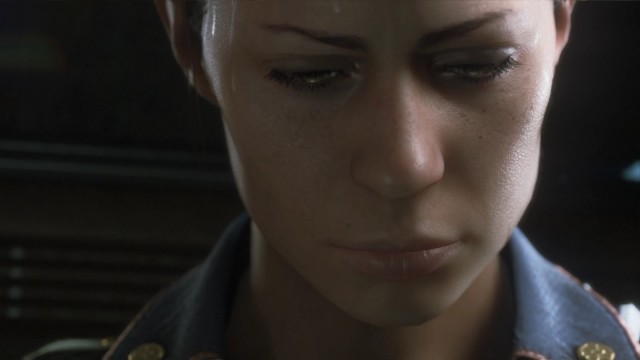 Amanda Ripley is actually cannon. She is mentioned in the second movie.

Don’t get me wrong, Lara Croft is a great character and the new Tomb Rider had a good story. Plot wise it might be even better than Alien: Isolation but it was problematic. I wrote about this in my review of the game: it included a lot of gratuitous ass shots, gratuitous violent death sequences, rape as character development and Lara getting bound and hog-tied in every third cut scene. Amanda does not need to deal with any of that: the game establishes her as a competent engineer and she easily slides into her new role as an action hero without having to spend four cut-scenes crying, having a father figure mentor tell her it is OK and having to go through an almost-rape scenario to finally be able to pull the trigger. She is designed as someone you are supposed to identify with, rather than someone who you should feel bad for, and want to rescue. She is strong, resourceful, brave and driven. She has moments of vulnerability too, but she almost never doubts herself or her abilities.

Part of it might be due to the fact that she was designed to be a carbon copy of Ellen Ripley, which in itself is not necessarily a bad thing. Ellen has become a quintessential action heroine archetype and as such she is not the worst character to model your protagonist after. I think one minor criticism I have is that Amanda fades into the background a bit too easily. There are chunks of the game where you almost forget she is not a silent protagonist. Her story arc is a bit weak, and the resolution of her quest rings a little hollow. 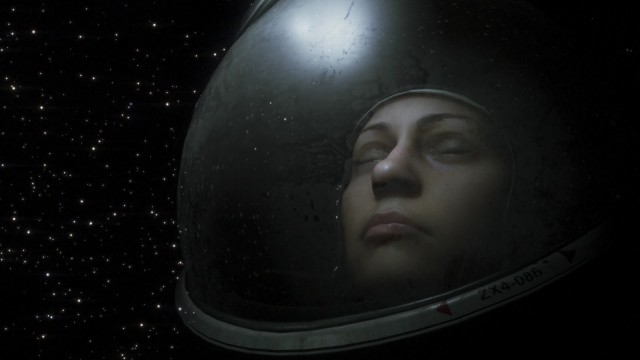 This was super annoying.

The overall tone, mood and theme of the game is perfect. It hits all the important thematic points an Alien game should: human greed, ruthless bureaucracy, deterioration of social norms when faced with an alien threat, fear, abandonment, isolation, etc.. Unfortunately the supporting characters are not particularly memorable or likable so it is hard to get attached to them. Amanda’s personal story culminates in what amounts to “thanks, but the princess is in another castle” and final scene was beyond disappointing. If you haven’t finished the game yet, brace yourself for an utterly pointless and unsatisfying ending.

I usually hold the opinion that a story can make or break the game. Alien: Isolation shows us that this not always true. Sometimes good art direction, solid game play and a well designed protagonist can more than make up for a sub par story and a weak plot. The game is definitely worth playing for these aspects alone.


One Response to Alien Isolation