The original Space Hulk board game was released back in 1989. It would not be fair to say it was a direct cash-in, but the game design and theme were clearly influenced by the enduring popularity of James Cameron’s Aliens film. The epic battle between Ripley and the hive queen has become iconic example of bad-ass space heroism. Games Workshop game designers either purposefully or unconsciously channeled that that when they made a game about brave Space Marine terminators in heavy power armors boarding a derelict space ship wreck to cleanse it from alien infestation. The core game play was custom-designed to allow players to re-enact classic SF horror scenes such as blasting heavy machine guns on full auto at a horde of aliens until running out of bullets and being overrun. 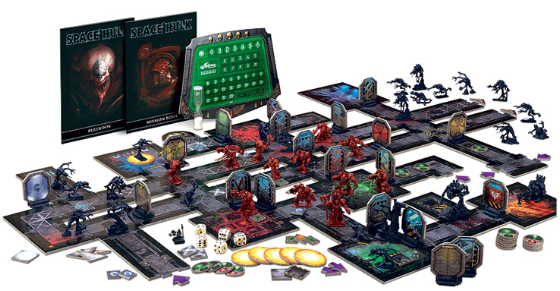 The game proved to be immensely popular. The first edition got several expansion packs, until being re-released in 1996 and later in 2009. The third, most recent edition was a very limited run which sold out within a week. Space Hulk was also adapted into at least five licensed video games:

There have also been a number of fan made expansions, conversions and attempts at digitization of the game. The popularity of the title is enduring and it remains one of most iconic Games Workshop properties. For many players it has been the gateway drug that got them into Warhammer 40k and wargaming in general. Thus it was no surprise that the company has decided to re-release the game earlier this year. The fourth edition of the game briefly appeared on the Games Workshop website in late September and sold out in less than 24 hours. I was lucky enough to snag a copy of it in that first batch at a discounted pre-order prince before they ran out of supplies. 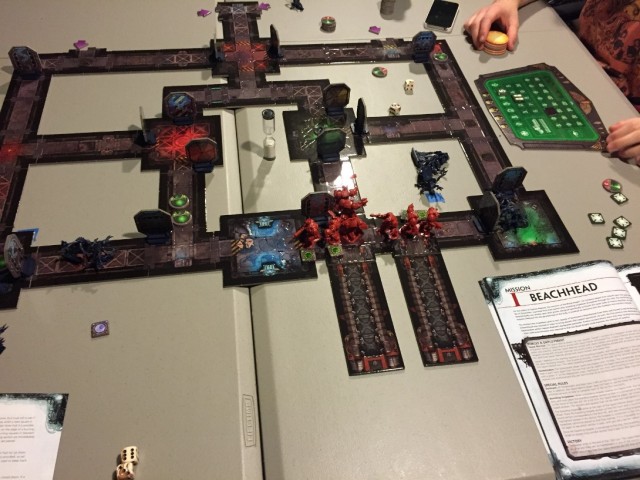 Playing the first mission in the booklet.

If you have never seen the game played, it is a quite interesting box set. Instead of static-printed game board, Space Hulk uses modular floor tiles made out of thick, glossy cardboard like substance. They are more or less like big puzzle pieces that easily snap together to form the claustrophobic, tight corridors and chambers of the derelict, alien infested space wreck. The mission booklet that comes with the game includes instructions for assembling 16 game maps using the available pieces. Most of these are time tested maps from the original edition, but several are brand new. Players are encouraged to play the missions from the booklet in order, but with the plethora of available pieces it is entirely possible to design your own missions.

Many of the floor pieces are textured with groves or various protrusions that represent battle damage, machinery or wall fixtures which is a very nice touch. The material is sturdy, sleek and glossy. It should stand up to repeated use. 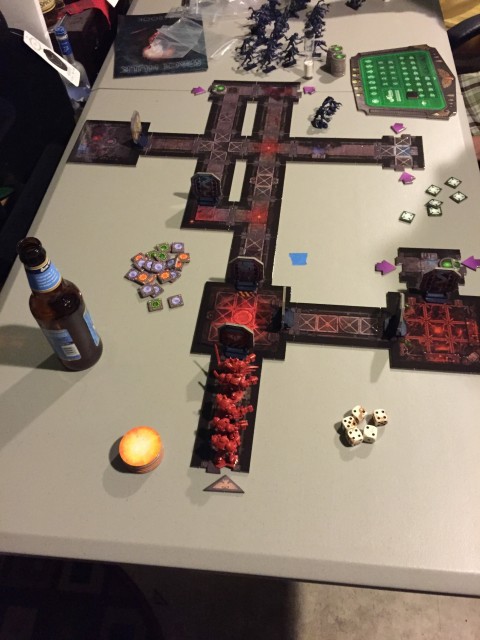 This is the setup for Suicide Mission – the 2nd scenario in the booklet.

The box ships with eleven Space Marine terminator models, a few dozen Genestealer models as well as a Blood Angels Librarian and a Broodlord. All of the models have been custom made for the game. They are the same scale as standard Warhammer 40k models but do not use the standard round bases. Instead the models are designed to be used without any bases. They are made of a waxy plastic which is softer and more malleable than the standard Games Workshop casts used for their flagship games. This particular material was likely chosen to allow the models to survive being stored in the game box, along with the heavy cardboard pieces without getting damaged. 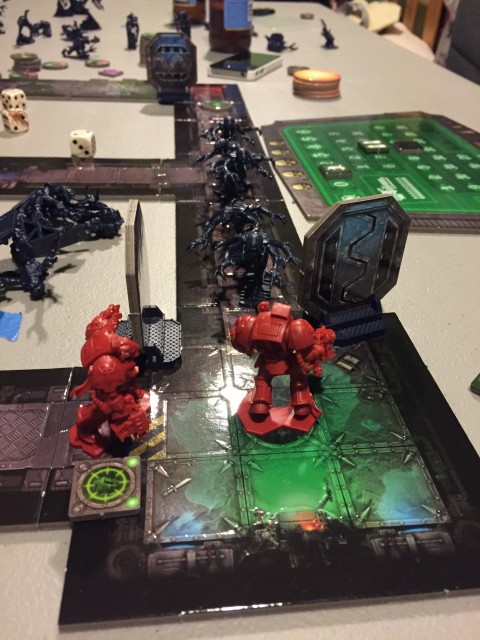 Despite a lower quality casting material, the actual sculpts are very detailed, and feature the intricate over-design of the modern Games Workshop range. I might be a traditionalist, but I am a big fan of old school hand sculpted models. Miniatures designed entirely in CAD software tend to feature exuberant and needless detail that is invisible during the game but a nightmare to paint properly. The Space Hulk minis however don’t necessarily need to be painted. While the box art and examples in the booklets feature high quality paint jobs by the Evy Metal team, the actual game pieces are color coded (Space Marines are red, Genestealers are blue) to stand out on the game board.

Despite the seeming complexity of the game (the number of available models, modular floor tiles, different mission scenarios) the core rules are incredibly simple and intuitive. They are outlined in a 15 page rule booklet. The mission booklet contains instructions on how to assemble the floor tiles for each scenario, what models each of the players starts with, what are the win conditions for each side, and whether or not any special rules are in effect. You do not need to be familiar with Warhammer 40k, or have any experience with war gaming to jump right in. Once you set up the game board and arrange the models in the starting locations Space Hulk plays much like any board game. Each player has a limited number of moves they can make per turn. The aliens are fast and agile, while the marines are slow and methodical, but well armed. Their turns are timed forcing the marine player to think on their feet and make quick decisions under pressure. 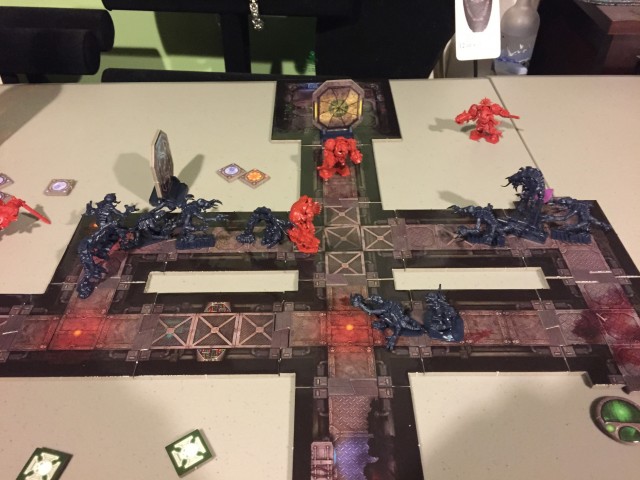 Marines surrounded by aliens are making a heroic last stand.

For newbies, I recommend starting with the second mission in the booklet. It uses a rather small map, which means you will not need a large table, it will be easy to put together and it guarantees a fast game. The mission is heavily stacked against the Marines so you should let the newbie play the Genestealers on the first game to ensure smooth and enjoyable win. The mission typically won’t last longer than 15-20 minutes so players can re-set the board, swap teams and play a re-match immediately after to see both sides of the game. The frantic combat and cramped claustrophobic corridors of this scenario truly capture the essence of Space Hulk game play.

The first mission in the booklet is much more balanced and serves as a great intro into the actual meta-story that connects all the scenarios but it involves a number of special rules which might be confusing to first timers. That and it involves a rather large and complex map that might be more difficult to navigate and master.

The key to winning the Suicide Mission as Marines is being very aggressive and very lucky with your rolls.

For me, playing the game again was a trip down the memory lane. I did not own it, but my friend did have either the 1st or the 2nd edition box and we have played it countless times. For me Space Hulk was a gateway to Warhammer, Warhammer 40k as well as pen and paper RPG. Looking back at it with the eyes of a tabletop veteran, I can honestly say it has not aged. Or even if it did, the 4th edition face-lift has smoothed over any jagged edges, and the game is still as fun and exciting as I remembered it.

Right before the holidays the game has returned to the Games Workshop store, albeit in limited quantity and at twice the price it was sold during the pre-order period. Still, I believe it is definitely worth the price. The set is lovely, well made and sturdy. It will last you forever, and it makes a great center-piece on your board game shelf.

This entry was posted in rpg and tabletop and tagged review, warhammer. Bookmark the permalink.


One Response to Space Hulk