I like utility spells in my video games. By that I mean spells that allow me to do things other than DPS. There is nothing about magic users as a RPG class that dictates that they should be pure damage dealers, but more and more modern RPG games treat them as such. Likely, this is an influence of MMORPG’s which must have rigid, and very clearly defined combat mechanics to allow for structured team work. For example in WoW mages are usually geared toward AoE DPS, warlocks specialize in DoT spells, priests and druids are usually pegged healers and etc. At least this was the breakdown last time I have played, and it made sense. In MMO games you spend most of your time either in combat, gearing up for combat, walking to a combat location or arguing with people over combat mechanics and strategies. Skills and spells that do not directly deal damage or aid your team are at best nice vanity perks, and at worst wasted XP and clutter that takes up space on your hot-bar.

Single player RPG’s however are different. They are often much more focused on storytelling or exploration. They ought to offer much wider variety of magic to the players. But more often then not, when you roll up a mage, and look at the available spell list you realize you don’t really have that many choices. There might be hundreds of spells, but the main difference between them is the color and shape of the particle effect that shoots out of your magic staff. That and the amount of hit points they subtract from the enemy health bar.

Yes, mechanically AoE, DoT, direct damage and debuff spells are very different and allow for a myriad of strategies and tactical decisions. But conceptually, they are virtually identical.

Most games use magic exclusively to hurt and heal and that’s really, really boring.

Don’t get me wrong, it is fun to throw a fireball from time to time. The more deadly it is, the more enjoyable the act. But that’s not all that magic should be about. Right now I’m playing Dragon Age: Inquisition and the only spell I really like is Fade Step. It’s basically a blink style ability that propels you forward much like the Vanguard charge in Mass Effect games. But you can spam it outside of combat – which is how I usually explore new areas. I run around hitting the search button while Fade Step is on cool-down, and mash it as soon as it becomes available. 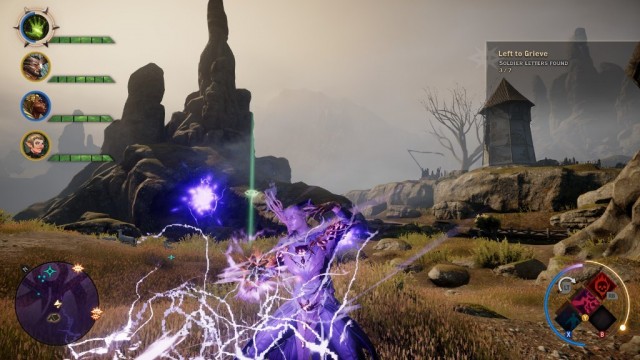 This is not really a critique of the game itself. I get why the spell system is the way it is: the game involves MMO style tactical combat, and the skills are geared towards that. The classes were designed to be balanced and complementary and with the way you issue combat orders, there is simply no UI space for frivolous spells. The game has limitations that are parts of its design, which were there (albeit less pronounced) since the beginning of the series so I’m not going to lose sleep over it. Skyrim did not have such limitations, but it’s magic system was also primarily concerned with shooting particle effects out of your fingers, buffing your own stats, or putting temporary debuffs or effects on enemies…

It did have Water Breathing though, which was neat. Yes, it was mostly useless, since the game never required you to do any extensive swimming or diving. But the two or three times you actually found a use for it it during the course of the 600 hours you put into the game, it made you feel a little bit like a superhero.

I like spells that have nothing to do with combat.

I hate to always keep going back to Morrowind (which is probably my favorite CRPG), but that game had a really great magic system. Not perfect, mind you, but interesting. It had a lot of really nifty utility spells were useless in combat but great outside of it. The entire school of Alteration was all about practical effects any adventurer would love to have in their toolkit.

For example, it had a spell that opened locks. Mechanically it was redundant because it did the exact same thing as the lock picking skill. From a purist game design point of view it was just useless clutter. But, I love the fact it existed. Think about it: why would a mage ever want to carry lock picks or learn how to use them? Morrowind gave you an option of role playing a mage who thought lock-picking was beneath him/her but still could effectively open locked doors using magic.

By the time Oblivion was released, someone invented mini-games, decided that picking locks must be one of them, that was the end of that useful spell. It got streamlined out of the Elder Scroll series.

In addition to the aforementioned water breathing, Morrowind had a water walking spell. It did exactly what you expected: it allowed you to run (or bunny-hop) across the surface of water as if it was solid ground. You might think it is a silly ability, but I remember learning this spell on every class because it was extremely useful. It allowed you to cross waterways much quicker and without having to do with annoying Slaughterfish and could be used to escape enemies. It was the extremely useful if you wanted to trade with the Mudcrab Merchant.

There was a spell that allowed you augment your jump height, in case you wanted to hop around the world like you were the Incredible Hulk. There was a complimentary slow-fall spell that allowed you to mitigate damage if you jumped to high. There was also a straight up levitation spell which would let you walk upwards or downwards at your normal speed. This meant that city walls, or steep mountain cliffs were not impassable barriers but merely temporary obstacles that mages scoffed at.

Utility spells in Morrowind offered the player an unparalleled freedom of movement that I have not seen in any other game.

The very existence of these spells influenced the game design. The world map was designed with the expectation that the player might be flying in from overhead, running over the ocean floor, swimming to the bottom of the sea and etc… Stationary in game assets were built to be explored from any possible angle. Some areas were specifically designed to be accessible only via application of utility spells or potions. There were side quests that required water breathing, and there were areas in the game that could only be reached via levitation. So if you never learned any spells or put any points into magic related attributes, then you simply had to scrape some cash and either buy or mix some potions to access those parts of the game.

If you were a spell caster or a hybrid class however… Well, it felt great to discover these little exclusive areas. Being able to nonchalantly float up into some stuck up wizard assholes mushroom castle made you feel like a bad-ass.

Inessential, non-combat, utility spells are always nice to have. They make playing a spell caster feel a little bit like being a super hero. Without them, wizards are just a boring damage dealers. I understand why sometimes boring AoE DPS class is what the game mechanics are calling for, and that’s ok. But more often than not, giving the player the ability to use magic outside of combat makes the game more fun. Not only that: they will often force the devs to design more complete, believable and robust game spaces. So next time you are designing a magic system for a single player RPG, consider adding levitation, water walking, or super speed to your spell list. Unless of course you hate fun, and you just want your game to play exactly like an MMO which is something no one ever asked for.