Using BTSync Behind a Corporate Firewall

BitTorrent Sync is pretty neat. I have been using it ever since Scott recommended it in the quintesential backup thread of 2013. It even made it onto my big list of essential tools. It provides a nice alternative to cloud solutions such as Dropbox by enabling you to sync devices directly without storing your data on a centralized server owned by a third party.

One of the major issues I had with it was using it behind corporate firewalls. When you are on a network that only allows outbound communication on port 80 and 443, BTSync is completely useless. Unlike Dropbox or Google Drive which both have absolutely no issues synchronizing folders in such environment, the BTSync client simply does not work at all.

And yes, before you say anything, there are reasons to block outbound traffic on port 22. Firstly, if on average the number of users who need to ssh out of that location approaches zero, then leaving that port open simply increases the attack space for no reason. Secondly, even if users do need to ssh out, chances are they will be communicating with known servers. Why have a wide open port that can be used an abused, when you can control connections on IP and MAC address basis, and require audit trail, and change-of-permission request documentation when devs ask for more access.

The only outbound ports that are typically wide open are HTTP and HTTPS. Your local BOFHs can’t readily lock them down as tight as they would want to, unless they set up a proxy server. Fortunately, proxies break a lot of the modern, dynamic, internet based things so chances are you might not have one. And if you do not, then you can funnel your BTSync traffic through an SSH tunnel on a HTTP/HTTPS port.

To get this working working you will need a few things:

If outbound communications on port 22 are open at your location, any server to which you have shell access will do. If you only can get out on ports 80 and 443, you will need to configure said server to run SSH daemon on one of these ports. This unfortunately requires root access.

You set this up by editing /etc/ssh/sshd_config. Search for the word “Port” and simply add another entry below, like this:

Make sure you can ssh into it from behind the firewall. If your port 22 is closed, you can specify the alternate port on the command line like this:

If that works, you will now be able to create an SSH tunnel that will act as a SOCKS proxy. On the machine where you want to run the BTSync client, do the following:

This will create a SOCKS proxy tunnel running on the local machine on port 9988. You don’t have to use that port number. Feel free to use any other port, as long as it is not taken by anything else. I recommend making a script with this command and saving it somewhere in your path, because you will have to run it whenever you want to enable syncing.

Finally, once you have the tunnel running open the BTSync client, go to Preferences and open up the Advanced tab. Check the “Use proxy server” box, type in the localhost ip and the port number you picked (in my case 9988). Use the default SOCKS4 proxy type: 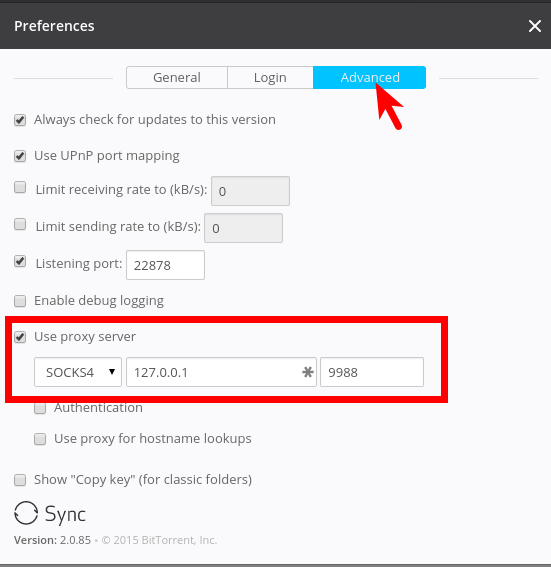 Save the settings, then pause and restart syncing to make them take effect. Once you do this, you should see your folders syncing up as they should. Of course the sync will stop when the tunnel is closed, but it is better than nothing.

This entry was posted in sysadmin notes and tagged linux, mac, short. Bookmark the permalink.


8 Responses to Using BTSync Behind a Corporate Firewall