Last Saturday, I have participated in the Dragons of Tarkir launch event at a local comic book store. Last time I have played Magic the Gathering was in high school and I was not planning to get back into the game any time soon. Collectible card games are an insane money sink and I’m already spending way too much of my disposable income on tabletop miniatures and video games. Adding a CCG to list of my nerdy activities at this point would be foolhardy. But it happened.

Some friends of mine were going to the event, and were signing up for the tournament so I figured I might as well join in. Since it was more of a spur of the moment for me, I went in completely blind. My friends prepped for the event by reading card spoilers and trying to figure out useful synergies between cards. I just showed up and said “give me whatever color deck is on top of the pile”. So I ended up with a Silumgar box: 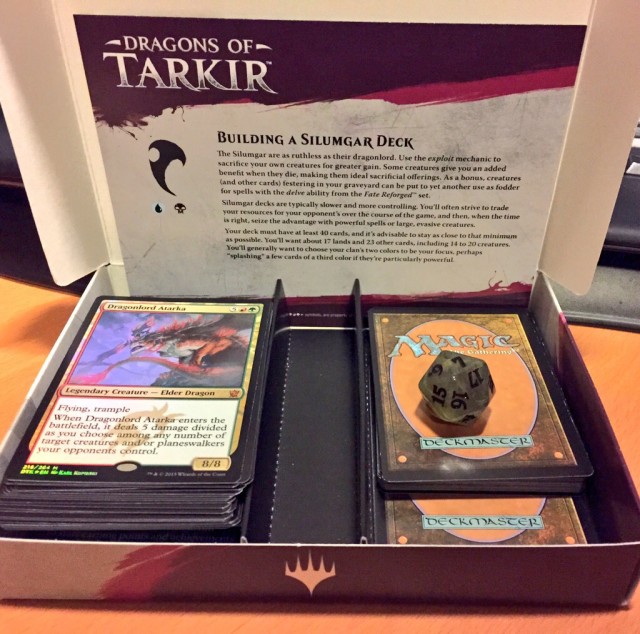 Silumgar combines black and blue cards, and uses a brand new mechanic known as “exploit” that has some interesting synergies across the entire card range. When you play a creature that has this rule, you sacrifice another creature and trigger the exploit effect. The black and blue cards also include a number of creatures have effects that trigger upon their death and plenty of spell cards that allow you to retrieve dead creatures from the graveyard (ie. your discard pile). So your deck is based on creatures that die all the time, but never stay dead, combined with removal and annoyance cards that are staples of black and blue colors (things that deplete enemy’s hand, steal their graveyard, clear all creatures from the board, etc..). I call it the “maximum asshole” deck, because if you play it right, the opponent will usually want to flip the table at the end of the game.

Granted, I wish I knew all of that before the tournament. The format was sealed deck, limited I believe. When I got my box, I had about 15 minutes to build a 40 card deck out of the contents of the box. As you can imagine, this might have been a lot less stressful if I actually did any research beforehand. But I did not, since I’m a dumb idiot, so I completely fumbled through my first few matches. Granted, my opponents were incredibly nice, and were happy to teach me as we played. I managed to learn enough to actually win my last match.

Most of the folks I went with were in the same boat as me: they were familiar with the game, but have not played it for over a decade. We figured that this event would be a good way for us to start fresh. We would all end up with starter decks with current generation cards, and none of us would have unfair advantage of having large collection of tricky, rare cards they have accumulated over the last twenty years or so.

After the tournament we all agreed to set up a spending limit to prevent rapid escalation. The idea was to make our friendly games fair and balanced. We did not want to feel compelled to out-spend each other in order to stay competitive within our group. It did not work that well…

I believe this Loading, Ready, Run episode is pretty much exactly what happened to us:

At this point we are all about $50 into the rabbit hole, and there are no signs of stopping. I already ordered one “fat pack” and I spent days browsing spoiler sites, and buying singles. So I guess I’m a Magic player now. May god have mercy on my soul.

I have to admit that the artwork on the cards is pretty amazing. I remember it always being pretty good, but these new editions are absolutely gorgeous. The Silumgar deck has a really striking, sinister flavor to it and I love it. It very much reminds me of the Middle Earth: The Lidless Eye flavor, and I mean that as a compliment. I have very fond memories of being evil in that game.

Do you play Magic? What kind of a deck? Any advice for a fledgeling black + blue player? Do you indulge in any other CCG? Tell me about it in the comments.

This entry was posted in rpg and tabletop and tagged magic the gathering, short. Bookmark the permalink.


9 Responses to Dragons of Tarkir