Posted on May 5, 2015 by Luke Maciak   tein.co/18509
SPOILER WARNING! Proceed with caution. I’m not even going to try to talk about this movie without spoilers.

No one at Marvel/Disney seem to know what to do with Black Widow. It is clear that the studio does not see her as a useful asset because she is missing from most of the Avengers merchandise. It is clear that Avenger’s stars don’t view her as an equal team member but rather as eye candy and distraction. But Joss Whedon, self proclaimed feminist, known for creating well rounded, interesting and compelling female characters on TV will surely buck the trend and do something interesting with her in Age of Ultron, right? I mean he didn’t do much with her in the first movie, but that’s understandable. This is the middle film in the trilogy: the one when you spread the wings and flesh out your characters. He will surely give her a more interesting role, won’t he?

Nope. Not even close.

Halfway through the movie Black Widow gets kidnapped by Ultron and thrown in a cage. She is a super-spy though, so she can escape, right? Wrong. She sends a message and waits to be rescued by the new boyfriend. Nothing says “full fledged member of Avengers that should get her own movie one day” like demurely waiting to be rescued by your most recent “it’s complicated” boy-crush. And yes, you read that right. The only lady on the team gets “romance” as her story arc. While other Avengers worry whether or not they are strong and heroic enough to save the world (outside enemies or from themselves), Black Widow gets to swoon and cry that she had her tubes tied when she attended The Evil Dance School and now she can’t give Bruce Banner little Hulk babies. That and sit in a cell and wait to be rescued. No I’m not kidding. That’s her entire story arc in this movie. 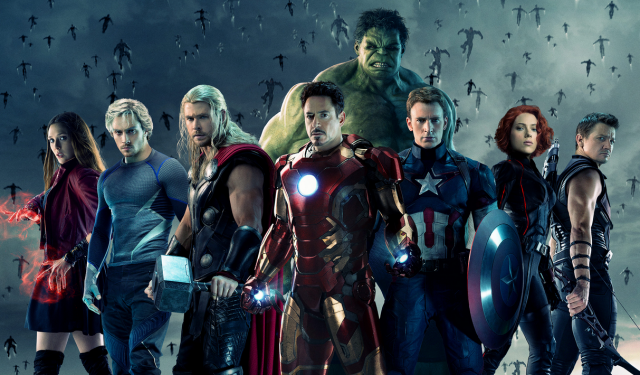 Let’s unpack that a bit. There is one particular exchange between Banner and Romanoff in the second act that is weird and unsettling for all kinds of reasons. The heroes just lost a big fight and they are hanging out at a safe house, trying to re-group. The two briefly discuss eloping together. Banner rejects the proposition, pointing out they have no future. He can’t be in a relationship, he can’t settle down and most of all, he can never have children. He does not elaborate why, but we know. Banner can turn into a monster at a drop of a hat, and he simply does not think he has enough self control to keep his family safe from the Hulk. He views himself as a threat to any potential life partner and children. Natasha’s response is bizarre. She confesses that she was sterilized as part of her assassin training, so she can’t have children either. The way she says it, indicates that she believes that this makes her “damaged goods”. She is trying to tell Banner that they are both broken people who can never be whole, which makes them good for each other. Except that she is not broken. Infertility does not make you less of a woman. Losing ability to give birth is a tragedy, yes, but it does not preclude one from starting a family or leading happy, fulfilling life. If Black Widow wanted to quit being an Avenger, settle down and adopt a horde of kids, she totally could. Banner does not have that option.

This is what makes this whole situation so bizarre. Out of all possible back stories and personal demons to wrestle, Marvel’s deadliest and most cunning assassin gets a broken heart and “lady problems”.

That is not to say that it is wrong for a female heroine to fall in love or to muse about motherhood and fertility. But if you only have one woman of note in your movie, don’t you think it is a bad idea to make her story arc to be solely about these things? Don’t you think that taking away her agency and making her a powerless damsel in distress in the second act is just bad writing? Don’t you think that “evil ballet school” is an incredibly awful back-story for an assassin super-spy?

Come on Joss, this is inexcusable. Between this, and the prima nocta joke… I expected better of you.

Black Widow is tired of this shit.

I really wanted to write a glowing review of the movie and tell you it is was really fun to watch, because it was. There is a lot to love about Age of Ultron. But it is really hard for me to overlook just how utterly Whedon dropped the ball not only with Black Widow but also with Scarlet Which. The later is first established as hyper-competent villain, but when the time comes for her to undergo a heel-face turn, she gets overwhelmed and needs an inspirational pep-talk from Hawkeye to transition into the role of a hero.

What’s worse, Scarlet Witch is the one hero in the entire movie that gets no funny quips of slapstick moments. Everyone else, including her brother get at least one Whedonesque smart-ass comment or at the very least a visual gag. That’s what makes this ensemble cast so engaging: we love to watch them squabble, bicker and joke together. But Scarlet Witch barely interacts with anyone. Here is a first female avenger with actual super powers, and Whedon writes her to be so dull and uninteresting I can’t even describe her personality. She literally has none. I guess she won’t get any merchendise either, because I bet most people already forgot she was ever in the movie. 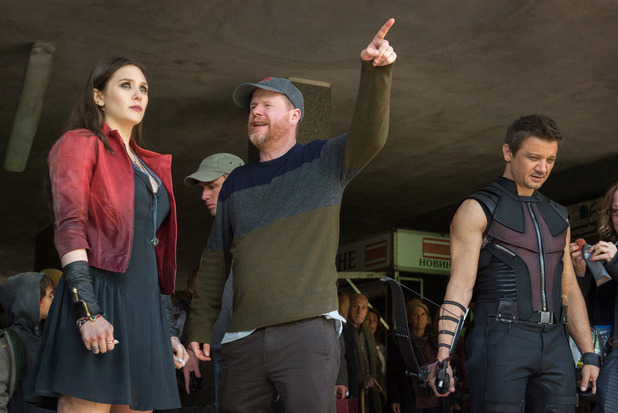 I want you to go out there and be as dull and uninteresting as humanly possible.

This is especially jarring since in all other aspects the film is either great or at the very least perfectly satisfying.

Whedon’s signature funny banter is there in full force. He is a master at creating extremely funny, quotable and captivating dialog and he does not disappoint. I could watch the Avengers just hanging out and partying all day. He also has a knack for injecting the same type of humor and witty banter into action scenes. Let’s face it – watching people punch hordes of robots over and over again, can get boring after a while. Whedon however can write protracted fights that are as amusing as they are suspenseful.

The titular villain, Ultron is as funny and engaging as a mad murder-bot could possibly ever be. I expected him to be a dull, distant, detached vengeful machine god. Instead we got an angry internet nerd with superiority complex and daddy issues. I think Lindsay Ellis hit the nail on the head when she described him thus:

Ultron is basically an angry first year philosophy student posting to Reddit. Except he's a robot.

This seems especially astute observation when you realize that Ultron literally learned everything he knows from the internet. He coalesced into being at the intersection between Wikipedia, Reddit and 4chan without context or real world experience to help him navigate the murky underworld filled with philosophical manifestos written by angry thirteen year old Frank Miller fans or six hour video monologues about ethics in game journalism delivered from a bath tub. No wonder he emerged as a murderous, megalomaniac, arrogant asshole. No wonder he is fond of making overly long, self aggrandizing speeches. And to be honest, I kinda like him that way. It’s the familiar kind of evil I wish I did not know so well.

Which does not mean he is a great villain, merely an acceptable one. Best MCU villain still belongs to Loki (eat your heart out Thanos) who is not only charismatic, but also flawed, human and relatable in all the right ways. He is powerful enough to be dangerous, but not threatening enough to warrant being destroyed. He is the kind of villain who can be thwarted, and imprisoned only the break out and wreak havoc in the next movie. But he can’t be the bad guy every time the Avengers assemble. That would get old really fast, and the Marvel universe has no shortage of interesting villains. Whedon makes a valiant attempt at humanizing the inhuman murder-robot and he does succeed at making him more entertaining he had any right to be. But Ultron is a ticking time bomb and he can’t be put in a box and saved for later. He must be utterly destroyed by the end of the movie, which makes him seem disposable. I have seen him described as “monster of the week” type threat, and I think this is somewhat accurate. He is merely a bump in the road to Infinity War, but I don’t think there is anything particularly wrong with that.

MCU is interconnected, and villains don’t exist in void. They have comparable power levels, and they must scale properly. Ultron must be mid-level, disposable threat so that Thanos can be adequately scary when he finally arrives. That’s just how these things work. 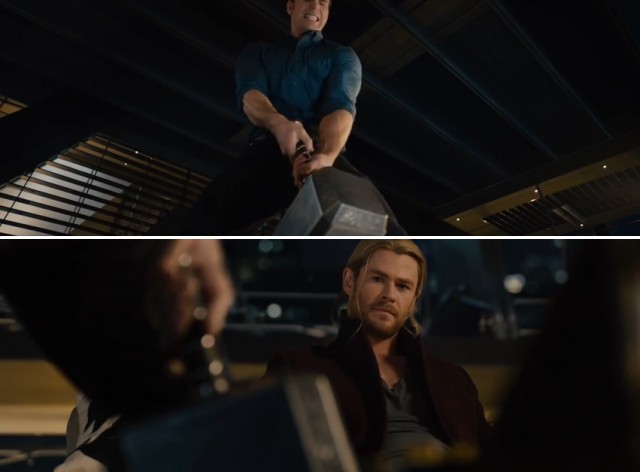 Couldn’t find appropriately sized gif, but can we all agree that this was a brilliantly shot scene?

I guess it helps when you don’t think about Age of Ultron as a middle movie in a trilogy, but as an episode in an ongoing shared universe series. Because that’s what MCU is now: a serialized story told in summer blockbuster movie installments. What is happening here is a storytelling media convergence: our TV series become more like movies (with season spanning story arcs, and no weekly resets to the status quo) and our movies become more like TV (shared universes and continuities between spin-offs, frequent cross-overs, story arcs that span many movies). It is happening now, because our media is no longer consumed in isolation. With on demand services, video streaming, online wikis and social media it is impossible to miss an episode or be confused by continuity. There is a whole cottage industry of commercial sites and fan driven communities which specialize in explaining and contextualizing everything. In fact, getting new viewers up to speed now became part of the advertising campaigns with marathons, TV specials, magazine features, interviews and promotional re-cap articles.

Age of Ultron may seem sloppier and less focused than it’s predecessor but it is also much denser with lore. The first movie had one goal: to provide an origin story for the Avengers as a super-hero team. The sequel is trying to accomplish several things while at the same time telling a self-contained and compelling story about crazy robot trying to blow up the Earth.

Let’s try to enumerate all the things that Whedon’s team managed to squeeze into the two an a half hours of screen time:

That is a lot of stuff to fit in a single movie. The fact that Whedon can keep all these balls in the air, and only drop one or two is still very impressive. According to some of the interviews, his original cut was only a little short of four hours. A lot of stuff got cut from the theatrical release, though Whedon claims most of the lost scenes were small, and inessential character bits, and more screen time for side characters. It’s a pity because the small, inessential moments is where Whedon shines the most. One would hope that perhaps one day we might get a Lord of the Rings collectors edition, directors cut version of the film, in which Scarlet Witch is actually a funny and memorable character. I would love to see it.

This entry was posted in movies and tagged avengers, marvel. Bookmark the permalink.


8 Responses to Age of Ultron