You don’t need me to tell you to go watch Mad Max: Fury Road. You have probably already seen it twice, and even if you didn’t you have likely read a dozen of glowing reviews. There is little I can say here that would change your mind about it. In a way this is probably the shortest and simplest movie review I have ever had to write. Which is why I’m about week late with publishing it. I have been trying to figure out what to say about it, but all that comes to mind is: “go see it”. 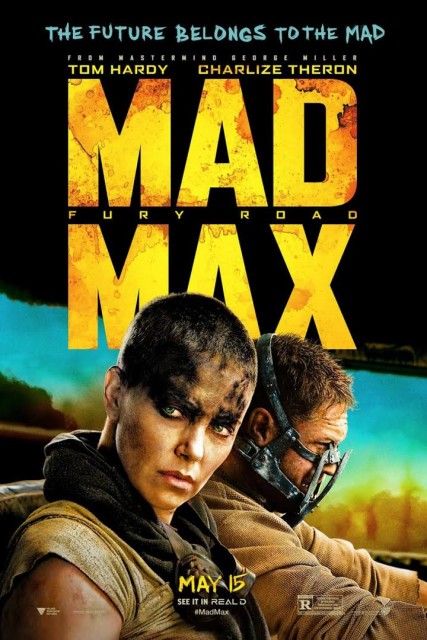 Usually when I leave the theater I have a list of complaints about the movie I just saw, but when I was done watching Fury Road I had none. It is a perfect fusion on old school, 80’s era action cinema, modern special effects and stunt work and progressive, modern storytelling. It is a movie about women who overthrow a literal patriarchy told as an extended car chase scene. It has post-apocalyptic automobile mayhem, electric guitar flame throwers, larger than life villains, explosions and vibrant female protagonists who are neither background decoration, nor damsels to be rescued, but the actual heroic protagonists.

It’s is actually quite amusing that I have watched this film and Age of Ultron almost back to back in the span of two weeks. If you read my review you know that I was disappointed with the portrayal of Black Widow and Scarlett witch. Fury Road succeeds everywhere where the latest Avengers movie has failed me. George Miller takes all the stale sexist movie tropes and subverts them in new, exciting ways.

For example, Charleze Theron’s Imperator Furiosa is most definitely an “action chick” of sorts, but not in the same way as Black Widow is. When she fights, she does not strike sexy poses for the camera. She is not “movie beautiful” and she does not try to be. There is dignity and gravitas to her character that is absent from the portrayal of Black window, despite the fact both occupy the same action heroine role in their respective films. I mentioned this phenomenon of fight scenes and violence being depicted differently in my review of Pretty Deadly. Miller does it right: women are depicted as capable rather than sexy, effective rather than graceful. He specifically tries to avoid the male gaze, especially during combat.

In fact, Miller’s care not to sexulalize violence against women is especially topical, considering the ongoing media debate on this topic. If you have been online in the last week or so, you are probably painfully aware of the general disappointment at the way creators of Game of Thrones have been handling depictions of rape. Or the very fact that they keep injecting rape into their stories.

Mad Max: Fury Road offers an interesting counterpoint to those who claim that depictions of misogynistic, violent societies should include such scenes for the sake of realism and pathos. George Miler however proves that this argument is bullshit:

Note: FURY ROAD is an R-rated movie w/ a sexual slaver villain yet Miller & co. didn't feel the need to include a rape scene. #GameOfThrones

Miller does not need to show us that Immorten Joe’s wives have been sexually abused and enslaved. We already know what from the context. We can imagine the kind of trauma they might have went through without having to see it glamorized on the screen. Max believes their story and emphases with them without having to have witnessed it.

In fact, while Miller demonizes toxic masculinity by casting Imorten Joe as a literal patriarch and his War Boys as a destructive warrior cult, Max is held up as an example of positive, masculinity. Max does not mind being used as a sniper stand, because he knows Furiosa is a better marksman than him. He does not mind fighting henchmen to give her enough space so that she can take out the big bad. He never questions her competence just because of her gender. He treats the female protagonists as his equals. He never feels the need to save them from themselves. He never delivers a monologue telling them how things are in the “real world”. He trusts in their abilities, respects their judgment and recognizes their bravery. None of this diminishes his status as a action movie bad-ass or masculine hero. In fact, it makes him all the more relatable and likable. But despite being the titular protagonist, it is not really his story. It is Furiosa’s. She is the breakout star of the movie.

That, in itself is somewhat ground breaking. We don’t see this in Holywood that often. But Furiosa is even more than that.

Furiosa is disabled, but her disability is handled with the grace and subtlety that is rarely seen in Holywood, much less in the SF action genre. Her missing arm is never a plot point or subject of conversation. She is simply allowed to be, and none of the characters treat her differently because of her prosthesis.

You could write an entire essay on the many ways Furiosa is an amazing character. But if she was the only female protagonist in the movie Miller might have fallen in to the same tokenization traps as Whedon did. Instead, however, he wisely side-stepped those issues by making her only one of many varied female characters.

Mad Max: Fury Road is a summer blockbuster action film in which the main protagonists are disabled women, women of color, pregnant women and elderly women. I was especially overjoyed to see Melissa Jaffer (whom I haven’t really seen since the days of Farscape) cast as a tough, motor-bike riding, rifle shooting desert scavenger. I was even more impressed when I heard that she did her own stunts.

For these, and many other reasons, many critics hailed the film as a feminist triumph. Granted, not everyone agrees. There has been a lot of discussion whether it can be called a feminist film, and what makes film to be feminist. I already shared my thoughts on it in a Storify the other day so I will include it here, rather repeat myself:

Whether or not Mad Max: Fury Road is actually a feminist picture, it is still a fantastic movie with great characters, memorable action sequences and unique aesthetic. When I first heard they were making a new Mad Max movie I did not think I could get excited for it. The genre seemed overplayed and dated to me. George Miller however knocked it out of the park, proving not only that he can resurrect an old franchise in style. He made it clear that he can make modern, progressive movies better than folks half his age.

I hope that folks at Marvel are taking notes. This kind of movie making is what we need to see in 2018 when they finally give a solo film to Captain Marvel. After her stint as Furiosa, Theron should be a no-brainer pick for Carol Danvers.