I was always a big fan of Vampire: The Masquerade. I knew that there existed a short lived TV series based on the game’s license but I never really had a chance to see it until now. Over the last few days I watched the whole thing. Which is not a big feat – the series only lasted for 8 episodes. So let me jump right into the review.

Low budget, attempt to bring the Vampire the Masquerade world to the small screen as a mainstream TV drama. 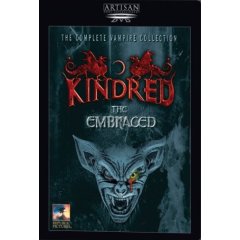 White Wolf’s World of Darkness is a very rich and complex backdrop for their series of Role Playing Games. This version of the modern wold is populated by hidden societies of vampires, warewolfs, magesm, wraiths, mummies, daemons and other mystical creatures who control the worldly events from behind the scenes. Kindred the Embraced (KtE) is loosely based on Vampire the Masquerade (VtM) game which depits lives of vampires, or as they call themselves “the kindred”. When I say loosely, I mean it. While background is definitely licensed from White Wolf, and bears the official logo, the writers took some liberties with the source material.

But before I start bashing it for departures from the original, let me talk about the overall aspects of the series. This way someone who haven’t played Masquerade but enjoys vampire stories can get something out of this review without getting bored.

When you watch the pilot, it seems that this series will be the story of a San Francisco cop Frank Kochanek (played by C. Thomas Howell) who discovers the existence of a secret Kindred society in his city. The pilot is all about him, and his tragic love affair with one of the local vampires. However, within 2 or 3 episodes, the series shifts it’s attention to Julian Luna (Mark Frankel) – the vampire prince of the city responsible for upholding the kindred law, upholding the masquerade (ie. ensuring that the existence of kindred is hidden from normal humans) from and keeping the quarreling clans from waging an all out war on the streets. There is a reason for this – Howell could not act his way out of a box, and thus he makes for a very poor lead. He essentially becomes a mere supporting character by episode 3. 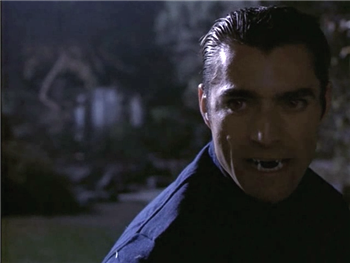 What kind of a story is it though? It’s not really a typical VtM stuff. The religious and biblical subtexts are gone. The usual emphasis of gradual loss of humanity, disconnect with the mortal world and the struggle with the Best within is pretty much ignored. There is no impending Gehenna (doomsday when the most ancient vampires will awaken to devour all their offspring), no thin bloods (heralds of Gehhenna), no Golconda (state of enlightenment where vampire is completely in control over his beast) to strive for. There is also no philosophical discussion of the Camarilla vs Sabaat vs Anarchs.

It’s definitely not like An Interview with a Vampire or anything like that. The existential issues, struggle with the weight of immortality and dehumanizing aspect of vampiric existence is completely absent from the show. 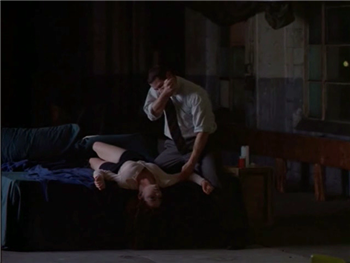 Sasha forcibly embraced by the Brujah

So what is it then? It is a TV drama. It’s all about star crossed lovers and love triangles. We have Julian Luna and human reporter Caitlin Byrne (Kelly Rutherford). A dangerous pairing between a prince sworn to protect the secrets of the kindred, and a investigative journalist who can easily shatter Masquerade if she finds out the truth. We also have Jullian’s bodyguard (Cash Channon Roe) and his niece Sasha (Brigid Brannagh) who belong to warring clans – and have to reconcile their love with loyalty to their blood. We also have a classic love triangle between Julian, Caitlin and Lillie Langtry (Stacy Haiduk) – a kindred who was the prince’s former lover, and current business partner.

All of this will seem odd for VtM fans. Mainly because the rulebook claims that love and sexual desire are just dim memories for most vampires. These emotions simply can’t compare with the torment of the hunger, and the ecstasy that vampires feel while feeding. For them drinking blood much better than sex, and Blood Bond is much stronger and more intense than mortal love. KtE vampires however fuck like bunnies, almost never feed, and obsess about their relationship. 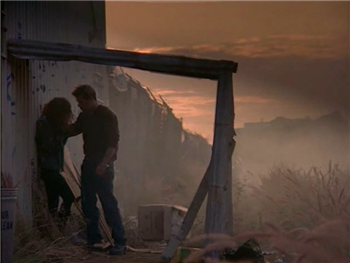 It’s clear that the story was written to appeal to the usual TV drama audiences. End effect is almost a soap with a vampire theme thrown in for a good measure. The only other theme that is consistent from one episode to another is the struggle of the Brujah clan to overthrow the prince, and take over the city. That and the balancing act of keeping all the clans in the city happy. Which is what actually keeps the show somewhat interesting and somewhat relevant to VtM.

The cast is very uneven. On one hand you get Stacy Haiduk who is a perfect fit for her role as the Toreador primogen. She does a really great job playing the shifty, capricious, sensual and yet distinguished character. On the other hand you have Howell who has the emotional range of Ace Ventura. He has two modes: overacting, and overacting really hard. Every time he shows up on the screen you cringe, and have to resist the urge to fast forward till he goes away. 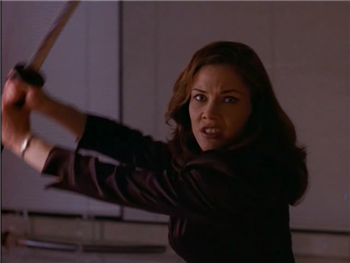 Same goes for Brian Thompson who plays Eddie Fiori the Brujah primogen who wants to overthrow Julian. He seems totally out of place in this leadership role. He would be great as a big, dumb Gangrel bodyguard – but he completely fails as a Brijah leader.

Frankel can hold his own most of the time, but sometimes he struggles with the vocabulary and ends up comming off fake or wooden. In fact this problem plagues the whole cast. It seems that no one gave them glossary sheets or explained what the different VtM terms mean, so they just improvise. Sometimes it works, sometimes it doesn’t. Most of them get better at it as the show progresses, but it is an evident problem.

If you are Masquerade fan, you will either hate this show, or at least have mixed feelings about this. I really didn’t like the changes to the source material. Omitting stuff is one thing. I can live without the religious, and psychological subtexts. I can live without the rich folklore and legends of the vampire world. Hell, I can even understand complete omission of Malkavian and Tremere clans. They probably didn’t have enough good actors to play crazy Maklavians, and a budget to low to actually include a magic obsessed clan. I can even live with the fact that there is no Sabaat or Anarchs in Julian’s city. 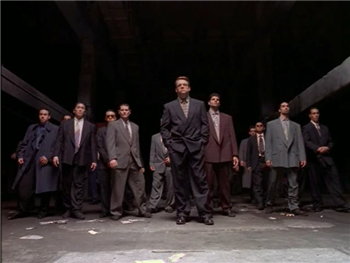 But re-writing the cannon is almost always bad. There are numerous examples in which the difference is not only jarring but also makes no sense. For example, in KtE vampires can walk in the sun after they feed. WTF? I guess they wanted to have more outdoor and daylight shots – just without Howell in them.

The Brujah clan is depicted as organized mafia type deal, which is quite opposite from the fierce independence and free spirit Brujah from the game. Gangrel in the show are essentially like the game Brujah – individialists, bikers gangs and etc. No clue why they chose to do it this way. They could have easily made Fiore a Giovanni which would truly make him a sinister, dark character and give his his intentions of overthrowing the prince more context.

It would also make the rift between Cash and Sasha wider than the contrived, made up “blood feud” between Brujah and Gangrel clans. If they only read more material, they could have accommodated all their ideas, and even made them better. 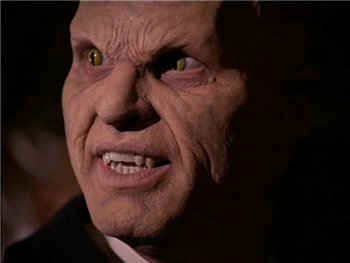 The serial killer in the Night Stalker episode could be a Maklavian. The rogue Nosferatu Goth, who btw is the only guy in the show that looks the way Nosferatu are supposed to look could have been made into a Tzimisce with some crazy body mods. After all, they did use an Assamite in one of the episodes – so it’s not like they didn’t look at anything other than the main source book.

There is also no mention of ghouls and blood bonds. Jullians affair with the blond reported could have been easy and simple.

I’m guessing they kept the number of clans to minimum, and made Brujah into the bad guys in order to keep the show accessible to casual viewers. Once you have to keep track of relationships between sects and blodlines and their philosophies in addition to clans, things might get confusing. Still, with the VtM license they could have done tons of interesting stuff. They just chose not to. 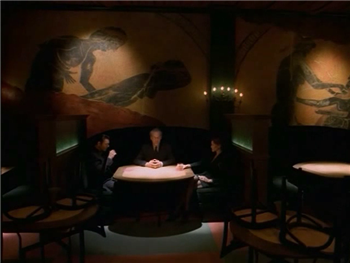 Julian Confers with Lilly and Archon

KtE lacks the truly tragic or conflicted characters who are hallmarks of the VtM. A classic example would be a brilliant artist embraced by a Toreador to preserve her talent forever who finds out that the embrace actually killed her creativity innovation leaving only an empty husk with the appetite for blood and perversion. In the show this tragic archetype is flattened. There is an episode in which Lillie embraces a talented rock star who then starts acting irresponsibly embracing groupies against their will. VtM fans will undoubtedly recognize the archetype, and perhaps try to understand why is this kid acting the way he is. Average viewer will on the other hand only see a spoiled rock star.

There are many moments like these – when the writing almost hints at a known issue, theme or archetype from the game. But the story always falls short, and these things are never explained, and never explored. Such a waste. 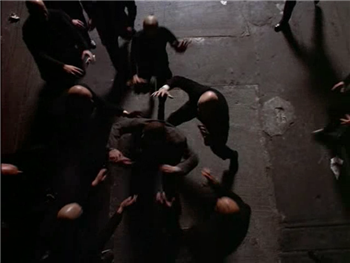 Overall however it is not a bad show. If you try to ignore Howell, and deal with all the little changes from the source, it is still a VtM like story. It’s certainly closest to the actual game than any other vampire franchise out there. It definitely could use more layers, more complexity. But then again, I guess it is hard to expect that from a show that was only starting to tell a story. There is not much you can do with just a pilot and 7 episodes. In fact, the last episode of the series was somewhat promising. The quality of the show was slowly rising from one episode to another. Given one more season I’m confident they would be able to catch their rhythm and start churning out some quality TV material. And maybe they could even got Howell some acting classes or something.

Unfortunately Frankel’s untimely death prevented the series from ever being picked up. And thus we will never find out what this series could have been. At this point it is barely average. With such an shaky balance between quality VtM grade content and soap opera crap, I can’t give it anything else than 2.5 out of 5 stars.

Would I watch this series to the end if it wasn’t a Vampire the Masquerade license? Probably not. It is what it is but it could have been so much better.

Btw, are there any Vampire players among the readers here? What is your take on this show? And also, what do you think about Requiem. I haven’t played it or read the book, but I heard it’s pretty much Masquerade with small tweaks done to the historical background, and relationships between different clans and sects.


4 Responses to Kindred the Embraced: Review