I went out and bought the shiny, sleek and sexy LG VX8700. I know, I was thinking about getting the enV – but in the end this seemed like a better choice. The enV just felt bulky and clumsy when I held it in my hand. On top of that, I don’t really text that much. Part of it is of course the fact that I can’t type on the damn phone keypad to save my life. But was it worth the extra money, and dealing with the size of that phone for added convenience? 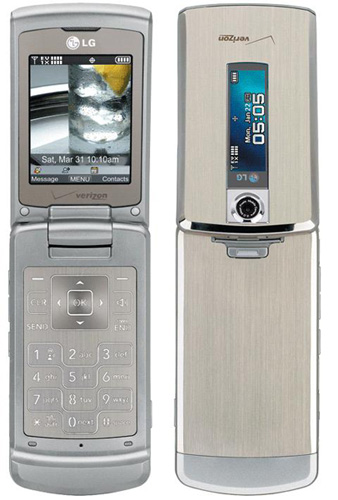 This is kinda what Razr wanted to be but never was. My cousin got one some time ago, and so far she is happy with it. I also read several reviews of this phone, and they were mostly favorable. The the main complaints seem to be that the SD-card slot is hidden behind the battery (I don’t really care about that) and that it does not have any front side buttons to control music volume, and switch songs. Since I’m not really planning to use this phone for listening music, that didn’t really bother me either.

The software is a fairly standard, crappy verizon POS but it seems fairly responsive. It has a 2 megapixel camera, a loud speaker, and big and bright screen. The keyboard is very flat, so it’s not very easy to type by touch. But then again, the keys are big, and they light up very bright in the dark so it’s not such a big problem. The device is supposed to have a GPS unit, but apparently you need to purchase the GPS software via the GetItNow feature, and pay a monthly subscription fee. Meh… They can shove that fee up their ass. I don’t really need a GPS.

The best part here is that this phone is supported by BitPim. All I have to do to be able to transfer my pictures, address book and music is to buy the USB cable on ebay for around $10. Which is a bargain, considering that these fuckers charged me over $20 for a shitty plastic belt clip that goes with my phone. Total ripoff – I probably should have went for some 3rd party product, or hit up ebay for it…

So anyway, the phone looks and feels good. It’s very shiny and weighs almost nothing. I like it.

This entry was posted in technology and tagged gadgets, hardware. Bookmark the permalink.