The last few days I have been playing Half Life: Episode Two. I already briefly mentioned it before, but I wanted to do a more in depth review now that I finished it. I have to say one thing – I want to play HL2: Episode Three right away. I can’t wait!

Please note that I will be dropping spoilers throughout this post without warning. In other words, this is your warning. If you haven’t played it yet, avert your eyes and stop reading now. ;) 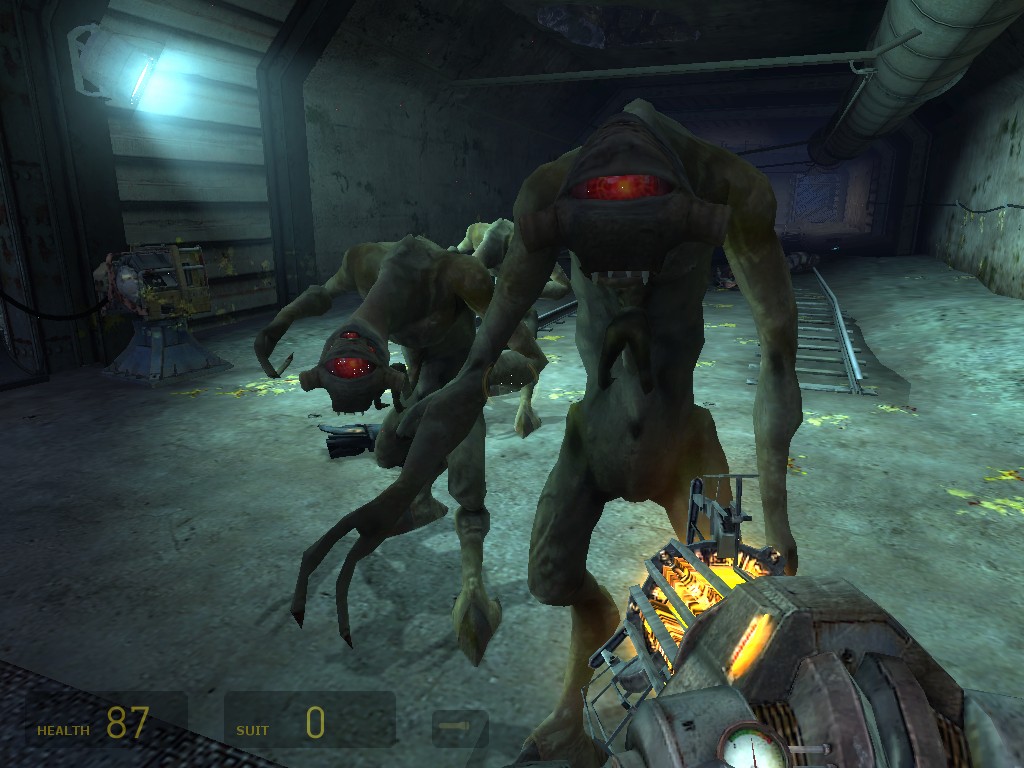 Vortigaunts – you will see lots of them in this game

First off, I have to mention Hunters. The way Valve introduced these guys was masterful. By the time I actually got to fight them, I as already shitting my pants. The first time you encounter them, you just see glimpses of it running around and hiding. Next thing you know, you are buried in a pile of rubble and Alyx is bleeding out on the ground. Holy shit! You immediately gain respect for these things. But you don’t get to fight them yet. In fact, you don’t get to fight them for a long time.

There is couple of instances that you see the damn things in a distance, and most of the time you just run away. And the fact that they are so elusive makes you fear them even more. At the same time, you just know that some tieme soon you will need to finally face them, and it won’t be pretty.

Then when you least expect it, they pop up. You are in a building and you can hear them outside. You see them peeking through windows and holes in the roof. They know where you are, and they have you cornered. You know this is it. Alyx freaks out and ducks behind a table trying to hide, hoping they will go away. You do the same thing, but you know it’s futile. Then they burst through the door and you are forced to fight. But can you even kill them? Striders are invulnerable to anything but rockets, and you have none. “Ohshitshitshitshit!” In an act of desperation you start pumping shotgun rounds into them. And they do take damage! They can be killed with normal weapons!

Fuck yeah! Take this bitches! This is for hurting Alyx!

Epic win. The buildup was intense, and the way the new enemy was introduced was flawless. Well done Valve. 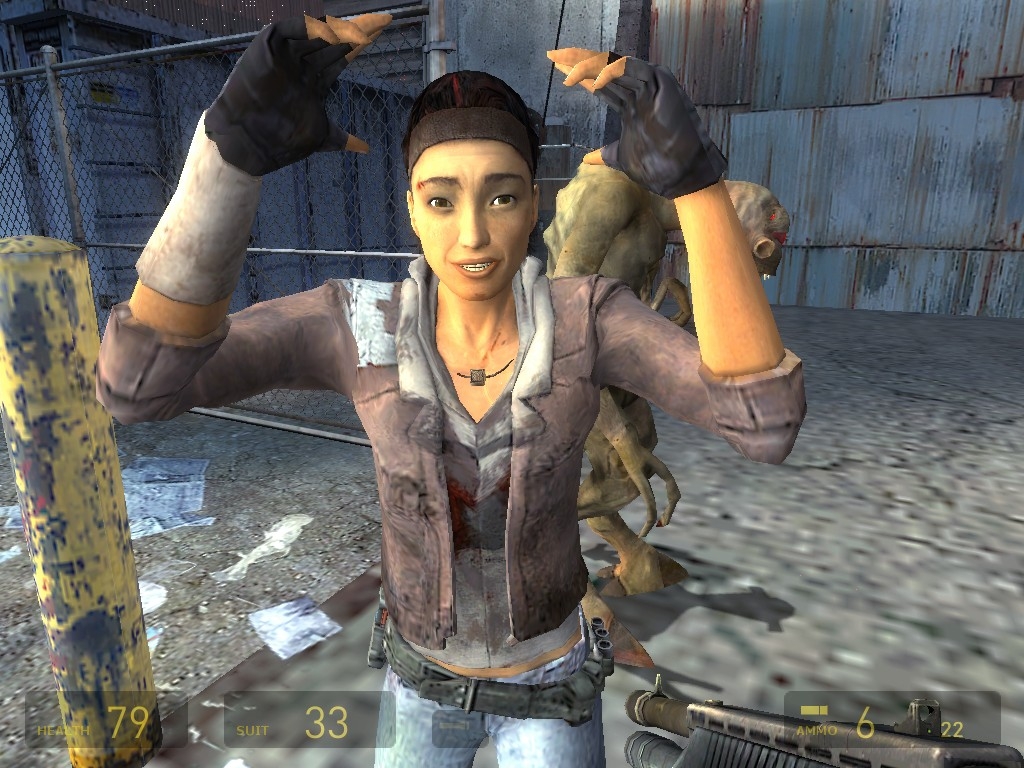 They are actually not that though, but they do take quite a few rounds to put down. Paired with Striders they make a very formidable force. I found the defense of White Forest base to be a the most challenging combat scene in the whole HL2 series. The only way to take out Striders at that point is to use the sticky bomb that needs to be fired off the gravity gun, and then shot with a normal weapon to explode. Hunters make the sticky bombs their primary target. As soon as they see you carrying one, they will try to hit it with their flechette guns making it explode prematurely. Also, if you nail a strider with one of them, and a hunter is nearby it will knock it down.

So you are really forced to take out hunters before you tackle the strider. The problem is, ammunition is scarce and scattered all over the place. Also the sticky bombs are dispensed out with a delay, so if you miss the shot, you usually have to wait a second or two for another one. The ally soldiers are not much help either. The lightly armed troops just charge the hunters and get obliterated in seconds providing almost no diversion at all. The ones armed with rocket launchers keep targeting striders even though they cannot be hurt by rockets in this stage. They would be much more useful if they were targeting hunters instead helping me to conserve ammo.

My strategy was to stockpile bombs into on piles on the ground for quick access. Then I would run/drive ahead and pick out the hunters. Then I would race back and try quickly take out the big guys before they destroy the rockets. It was very frustrating, and that final bit alone took me like 3 days to finish, because after I watched the rocket explode 20 times in a row I had to stop playing since it was getting on my nerves.

I also noticed that valve is getting better at giving the player subtle hints that nudge him in the right direction. In the past games I would sometimes wonder around a cleared area without a clue of what to do next. In Episode One Alyx would usually point you in the right direction. Still, I got lost in one of the “flashlight” levels because I failed to notice a fairly obvious hole in the wall. So I spent 15 minutes back tracking and examining every inch of every single wall until I found it.

In Episode Two valve gives you hints. For example, if you need to use the flatbed truck to climb on the roof and then go through the window, there will be some supply crates on the truck, and also one mysteriously seen on the roof. When you are in the antlion colony, the glowing grubs are used to indicate the tunnels you want to take. You want to step on them because they drop some health. They also mark ammo caches. In the 2nd silo, you can find your way by following the flares left by combine soldiers. In the driving levels, you just follow the road, or the trail of blue traffic cones. I was never really lost. 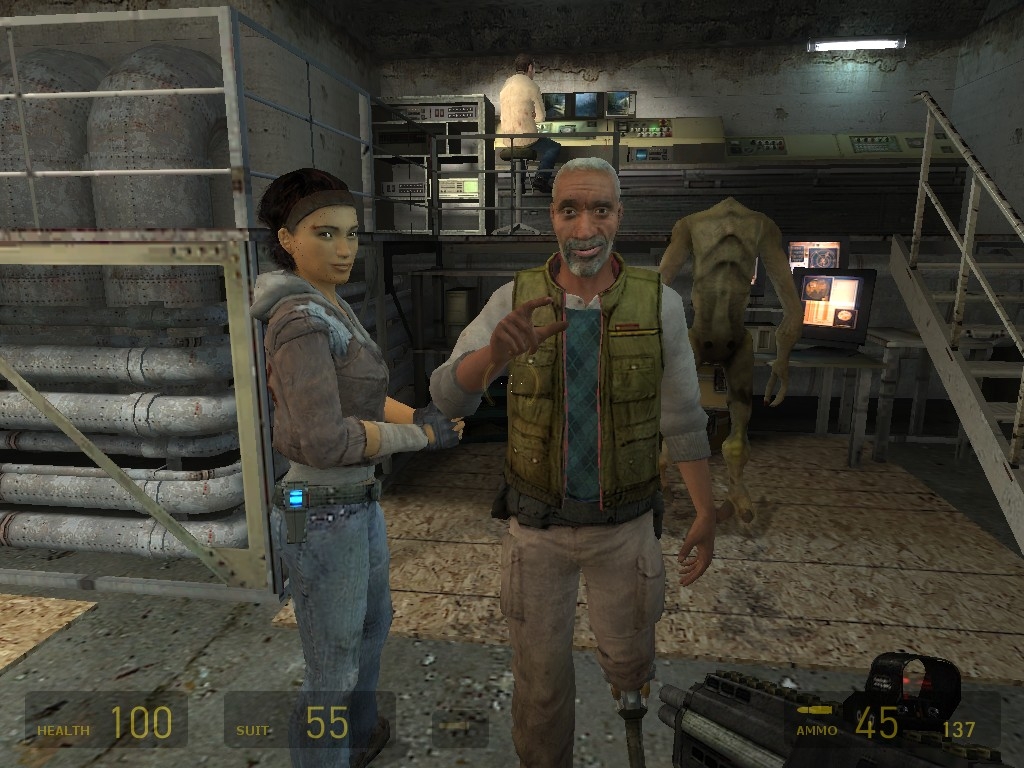 I also liked that the the story is progressing. Still, playing HL2 games is like watching Lost – you get a tiny bit of information, wrapped up a pile of mystery. For each answered question, there are 7 new ones. I do appreciate the little touches though. For example I lol’d when Elli suggested that Gordon and Alyx make him some grandchildren. Too bad the old man kicked the bucket before he could tell us more about his dealings with the G-Man, or about the cargo of Borealis. God damned advisors. Perhaps in Episode Three we will actually get to shoot these damn things. You’ll probably need to take them down from a distance with the crossbow. They disarmed and immobilized you so easily from up close that allowing you just to march right up to them and spray them with the machine gun would be a copout. 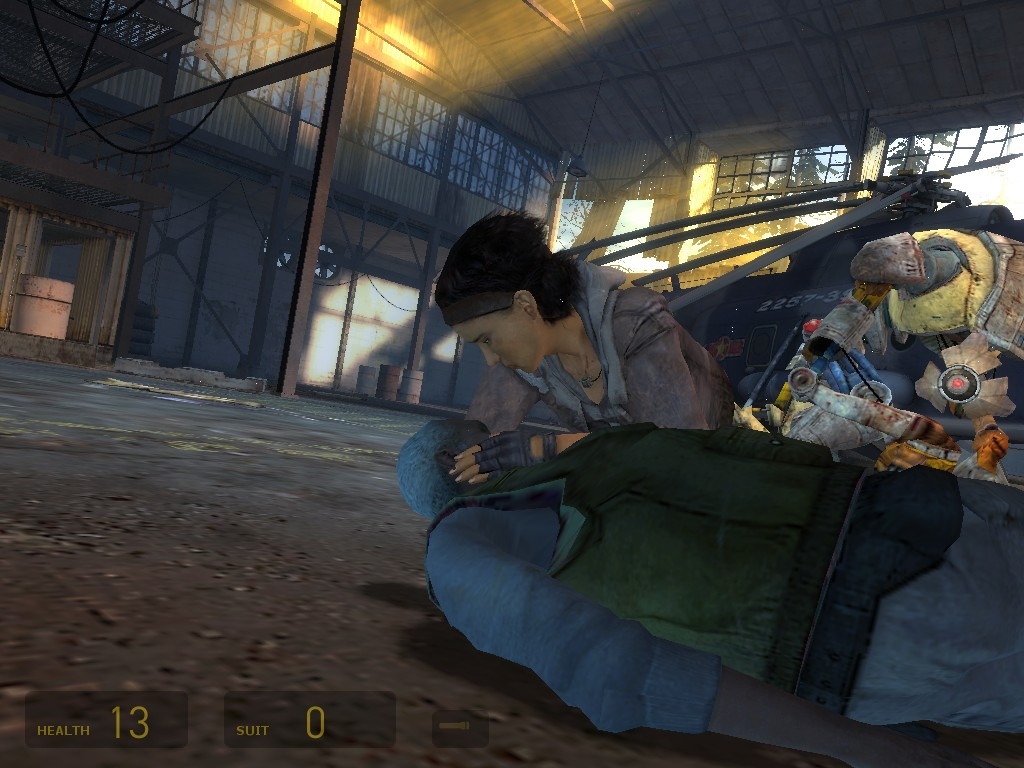 Speaking of Borealis – ZOMG, Aperture Science! After seeing this, I’m now convinced that Episode Three will almost certainly feature the portal gun. And considering how twisted portal was, the contents of Borealis may be tons of fun. Then again, we don’t know where it went. Perhaps there is something scary and mysterious lurking aboard – as in Event Horizon. Either way, I can’t wait to play it.