As you may recall, I’m a big fan of split keyboards. In general, I believe that if you are the type of person who spends most of their life in front of a computer, you ought to invest in high quality input devices. Personally, I spend 8 hours at work sitting at a desk staring on a computer screen. Then I come back home, grab something to eat and sit back in front of a monitor. Last year I invested into some nice mice both for home and for work.

I also bought the Microsoft Natural Keyboard Elite which I use at the office. At home I was still using an old Dell keyboard that originally came with my computer. I didn’t mind it, because it was simple and functional. I was considering buying a split keyboard for myself, but since Christmas was coming I simply put that on my gift list. :)

My cousin was nice enough to get me the Microsoft Natural Ergonomic Keyboard 4000 this year. It is actually the high end cousin of the Elite keyboard with the standard inverted T and normal Home/End/Insert key block. 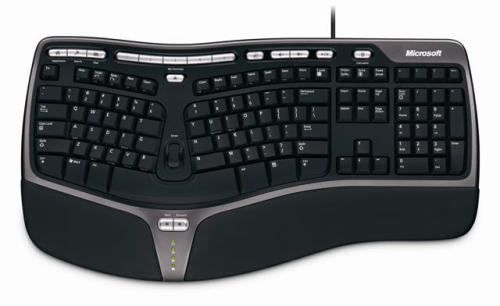 It has all the features I look for in a keyboard these days, namely:

I especially like the wrist support section. It is nice and wide allowing you to rest your wrists as you type but unlike Elite it is actually soft to touch. I think it has some sort of jelly inside, but unlike many of the wrist support thingymabobs you can buy it has a slick leather like finish to it which it will be easy to keep clean and should be less prone to wear and tear. I found that the cloth finishes on things like that tend to thin out, lose color and start to look filthy after a while.

The keyboard itself seems a bit bigger than the elite. It is actually wider, and the keys seem to be more spaced out. The numeric pad is like 5 miles away from the home row for example. But it also might be an illusion caused by the curvature of this keyboard. All ergonomic keyboards tend to have this hump toward the middle (which culminates where the keys are being split) and the sides taper of at an angle. This is actually by design, and it helps you to keep your hands at a more natural position. As you can see on the image above the 4000 has a very pronounced hump where the designers placed the fairly useless zoom bar. At least useless to me, because I hardly ever use any zoom features for anything, and I have yet to figure out how to re-bind that thing. Needless to say, by being there it actually forces the split key blocks to be farther apart than in the elite. Which is probably why the whole thing seems so wide.

The keyboard has few dozen additional keys all over the place. There are actually 14 special buttons above the function key row, and additional parentheses , equals and backspace above the numpad. Fortunately you can re-bind nearly all of them using the InteliType software that shifts with the keyboard. Yeah, I really hate the fact that I must install a driver to actually use the full functionality of my keyboard but eh… You either do that, or you are left with bunch of dead keys.

5 out of the 13 special keys are so called “Favorites Buttons” which have no built in function. You are actually supposed to bind them yourself to commonly used programs: 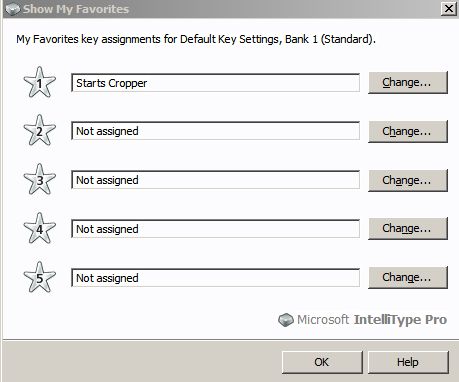 This is neat, until you realize that there is actually no way of reaching these keys from above the home row, without lifting your hand. This severely limits their usefulness, and relegates them to the realm of novelty feature. Next to these you have your volume control, calculator button (which I immediately rebound to use the XP Power Toy calc), and the Web, Search and Mail buttons which I will probably use for something else.

Strangely enough, the keyboard only has one Windows key (on the left) and one Menu Key (on the right). Most keyboards have them mirrored on both sides just like Alt keys. Then again, Elite also had one of each so I guess this is a design choice MS made for all of their ergonomic keyboards.

I have only one gripe with this keyboard. It is a minor annoyance, which I wouldn’t even mention if this was not a $60 keyboard. When I pay that much for a keyboard, I expect quality. Sadly, there seems to be a little play in the space bar. It seems to be a little loose on the left side. As if there was a few millimeter gap somewhere allowing the key to move up and down slightly without being depressed. It feels perfectly fine on the right, but when you hit it with your left thumb (as I commonly do) it makes an unusual “clunk” sound as it drops down a millimeter or two and the right side rises slightly in a sea-saw effect of sorts. At first I thought that this was simply a flawed keyboard, but I noticed that I was not the only person with this issues. Quite a few people are complaining of the same exact problem in Amazon comments and product forums and elsewhere online.

I believe that this is an inherent design flaw caused by the sheer size and curvature of the key. The space bar is actually bent and extends the whole length of the hump. This curvature combined with it’s length and would require some stabilization and support, which is likely missing here. Thus, it introduces the slight play which is detectable and a bit annoying. It is not a deal breaker though – I think I can live with it. I also heard you can correct this by taking off the key, and slightly bending the support bar inside of it. I might try that at some point if it keeps annoying me.

Here is a tip for Microsoft design team – in the next model, just split the damn space bar in two. Most ergonomic keyboard manufacturers do that these days, probably to avoid precisely this sort of issue from surfacing. Either that, or put the Windows key on both sides of the split, making the space bar smaller. A $60 keyboard should not have a clunky space bar!

Other than that, it is a fine piece of hardware. I’ve been using it for 3 days now and I think it is very comfortable. I’d recommend it whole heatedly if it wasn’t for the space bar issue. For some people it might be a deal breaker. If you are easily annoyed with that stuff you’d probably be better off with the Elite. But then you’d have to deal with the non-standard arrow key block, which may be even more annoying. :P

I have not tested this keyboard under Linux, and probably won’t for some time because the box I hooked it up to is currently running single boot WinXP. At some point I’ll try to hook it up to my Ubuntu box and see how it works, but I don’t feel like crawling underneath my desk and untangling cables again. Considering this is a Microsoft product, I’d expect half-assed Linux support. But, we shall see…