My last batch of book reviews dealt with older titles, so I decided to pick up something new and fresh for a change. Paolo Bacigalupi’s The Windup Girl was published in 2009 and is a 2010 Hugo award winner. Chances are I might actually be reviewing a book some of you may have not yet read which is quite unusual. 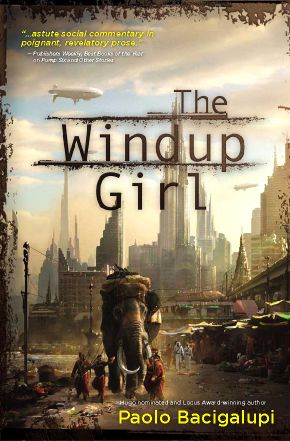 The Windup Girl is a very interesting post apocalyptic vision. But it does not deal with the standard apocalypse of the nuclear persuasion. No, it hits much closer to home. Nuclear destruction was one of the greatest fears of the previous generations. Thankfully, today we don’t really fear, or even think about it that much. We have other worries – one of them is our dependence on fossil fuels.

Bacigalupi paints us a vision of the future in which oil supplies have been exhausted, causing a complete collapse of global economy. The whole world is plunged into a new dark age, millions die out of starvation (as transporting food is now exuberantly expensive). Faced with famines and plagues decimating populations people turn to genetic engineering trying to devise new solutions to old problems. They devise bigger, stronger beasts of burden that can haul cargo or wind up power plants. They devise new crops, higher in calories, more resistant to diseases. Producing and transporting food becomes big business, and the genetic engineering cartels dubbed “calorie companies” become the new global power players. Of course their rise to power is not free of mishaps. Stuff like engineered plagues designed to spoil competitors’ crops or genetic DRM traps designed to spoil reverse engineered crops become a so common and widespread they start mutating, and creating new strains at astonishing pace. Engineered species out-breed natural ones, or push them out of their niches/ This leads to almost complete environmental breakdown and extinction of most plant and animal species on earth.

The action of the novel takes place in Thailand, which somehow managed to remain independent from the calorie magnates of the world thanks to having their own nationalized seed bank and closed border policy that prohibits imports of foreign food or seeds. It allows Thai bio-engineers to design viable, disease resistant crops and reverse-engineer western innovations with impunity. This makes it a rogue state, but also a market that calorie cartels cannot ignore.

Bacigalupi’s story revolves around a group of interesting personalities whose paths and fates intersect at critical junctions:

A “Calorie Man” is sent to Bangkok as an undercover agent with a mission to gather intelligence on the Thai gene-rippers, their methods, their discoveries and the location of their seed bank thus protecting his employer’s copyrights and secrets. A poor Chinese refugee who lost his fortune in an ethnic purge and now resides in Thailand as a persona non grata, trying to cheat, lie and scheme his way back into a position of power. An incorruptible enforcer of Thai environment ministry whose idealism, and unwillingness to compromise or bend rules makes him a folk hero in the eyes of the people, but a dangerous liability in the eyes of his employers. A windup girl – genetically engineered “new person”, artificially grown in Japanise vats and conditioned to be an obedient servant. She has served as an aide to a rich dignitary who was visiting Bangkok on a diplomatic mission, and then discarded and abandoned to avoid paying transfer fees, she is now forced to live in a country where here kind is considered an abomination.

All of these characters have their own goals, agendas, fears and hopes. They are fully fleshed out, colorful and captivating. My favorite though is the one character Bacigalupi does not spend that much time on. The character who is purposefully described as monstrous and barely human: the brilliant gene ripper named Gibbons. I like him because out of all the people described by Bacigalupi he is the only person with a pragmatic, realistic worldview. He is a true transhumanist.

Unlike everyone else all around Gibbons knows that trying to fix the collapsed environment is a fools errand. The damage is to vast, and clinging to the past is only going to result in extinction of the whole species. But there is a solution that was proven to work: adapt to the broken and out of control environment. The “new people” grown by the Japanise are shown to be incredibly resistant immune to the diseases that kill millions of humans each season. Because of that though they are purposefully made sterile and conditioned to be subservient. If their artificial sterility was removed they could easily breed with each other, and with humans and over several generations replace us old-style humans and inherit the world to which they would be adapted. Sadly, this idea is not very popular – especially in Thailand, where “new people” are deemed to be subhuman, soulless abominations.

Here is a question for you guys: what is your stance on transhumanist concepts like this one? For example, if the alternative was suffering and potential extinction would you support a project to modify and adapt human genome, or would you oppose it on moral/religious grounds? How about if there was no crisis, and the same modification was simply an upgrade. What if you could undergo a procedure that would indefinitely extend your life span, made you smarter, faster and more agile? What if it required you to transfer your mind to a new, artificial body? What if it meant leaving physical body altogether and starting new existence as a electronic ghost living in some simulated reality?


6 Responses to The Windup Girl