Oh, you liked Anathem by Neil Stephenson? You should totally read Diamond Age, they told me. It’s his best book yet, they told me. You know what? That’s bullshit. Diamond Age is nowhere near as good as Anathem.

You see, Anathem was nearly a perfect book for me. It was a novel about kick-ass scientist monks who discover evidence of a possible unidentified spaceship in the orbit, and spend most of the story talking about math, philosophy and doing proofs, up until they launch themselves into space to perform an epic, realistic zero-G commando strike on the alien vessel. Diamond Age is about… Well, it is mostly about a little girl who finds an interactive game/book that tells her stories about princesses and magical fairies. 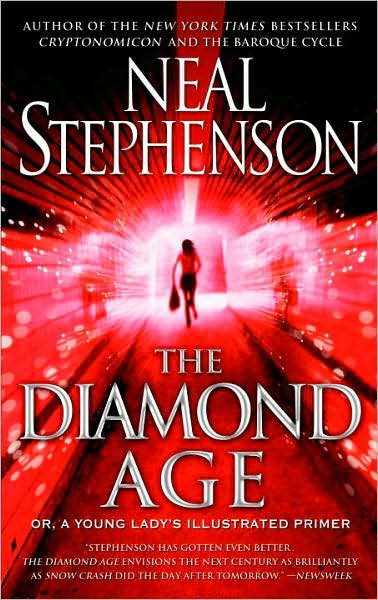 Of course, the book is not bad. As always, Stephenson as a lot of interesting ideas. It is just not Anathem. It is not in the same league. At least in my opinion. This might be actually entirely subjective assessment. Diamond Age is definitely more accessible to a general reader. Anathem was often dry, and the philosophical and scientific dialogs would go on for pages. But that’s precisely why I loved it. I found the concepts presented in the book endlessly fascinating. Perhaps it was because a lot of the stuff was new to me.

Diamond Age hits much closer to home, so when Stephenson took a 100 page tangent to explain Turing machines via a fable about how Princess Nell conquered a castle full of clockwork knight-golems I was getting slightly bored. When Vinge or Stross write about my field, they name name drop or mention important theories and forge ahead. Stephenson likes to explain things in detail, which worked great when he was talking about human mind being a crazy quantum engine, parallel universe theories or physics of zero-G navigation. But when he talks about the shit I have spent years studding, and makes it into a cute fairy tale, I’m not really into it.

Not to mention that Anathem had a completely unique, and inspired setting which I absolutely adored. Diamond Age is much less inventive near-future Cyberpunk which suffers from the fact that Stephenson obviously did a lot of research, and knows the theory but often is clueless about how these theories work in the real world. There were passages in there that made me cringe, because in Stephenson’s world all software seems to be bug-free and always works perfectly and thus in his world there are unbreakable encryption schemes, and 100% anonymous networks. In practice, most encryption schemes get broken not because of lack of mathematical complexity, but because of software implementation flaws.

For example the primary internet-replacement in his world seems to be some sort of Tor like, onion routed, heavily encrypted, distributed clusterfuck. At least that’s what I got from his descriptions. Of course at some point in the novel one character, decides she wants to find out the identity of someone she was interacting with anonymously over said network. Everyone she asks for help tells her it is impossible. Which, I guess is ok, since we are reading a SF novel after all, but I just don’t buy it. I mean, read up about Tor and how people go about attacking it – they don’t to crack onion routing itself, which is theoretically sound and secure. They use implementation flaws, compromise exit nodes and/or key servers, use social engineering tricks and javascript exploits to trick people into hitting their site directly rather than via the Tor proxies and etc.

There are a lot of oversimplifications in this book. If you have a CS degree or two, read security blogs and subscribe to places like /r/netsec, /r/sysadmin and /r/crypto you might be a tad bit annoyed at some of the stuff he writes about. Then again, Diamond Age also has nano-machines, and molecular assembler machines – and I have no problem with those. I can suspend my disbelief without batting an eyelid when he describes completely impossible, imaginary technologies. Problem is when he tries to talk about cryptography, cryptoanalisis, and networking, he no longer uses abstract techno-babble and pseudo-science but actual technical jargon which immediately triggers my bullshit meeter (which has a hair trigger because… Internet). Then again, the book was written in 1995, and a lot has happened in these fields since then – so maybe I’m too harsh on Stephenson.

The “Princess Nell” stories are arguably the weakest part of the book. It is a cool idea – a lot of plot exposition or character development is done within these allegorical fables produced by the educational AI almanac owned by the protagonist. So when the girl is bullied and needs to learn about self defense, the book tells her a story about a mouse who runs a martial arts Dojo, which is also attended by a friendly dinosaur. It’s all really cute, but it was completely lost on me. I’d much rather read a philosophical battle of wits between two scientist-monks than infantile story about little princes and her talking duck friend getting an object lesson in cryptography by visiting an enchanted library.

There were things in the book that I did like. For example, the Drummers idea is pretty interesting – a gestalt society that shares subconscious thought via networked nano-machines that live and replicate in their bodies. Individually, they function as normal but the parasitic nano-machines lower their inhibitions and stimulate their sex drive since they usually are passed from person to person via exchange of fluids. Put bunch of drummers in close proximity, and their nano starts talking to each other, plugging them into an ad-hoc massively distributed processing cluster. If you know how to write programs to use the Drummer network, you can infect yourself, have sex with one of them, and hopefully your program will percolate through the collective. That said, getting output out of that supercomputer can be tricky.

Granted, thinking about implementation of such a massively distributed cluster, routing data through it and even work scheduling in an unreliable environment where most of your processing nodes can drop out at any second is enough to break my immersion. But if you don’t think too much about it, it is a cool idea.

You are telling me that there are people out there who would choose to dress up in Victorian clothing, speak with posh British accents just because they could? Oh wait, this is the internet. Of course there are people like that out there. Never mind.

Overall, it is not a bad book. It has a few cool ideas, but at times Stephenson’s grasp of cryptology, cryptoanalysis and cryptoanarhism seems either lacking or outdated (which is justified considering publication date). The story is decent, but I found the magical adventures of Princess Nell to be tiresome. If I didn’t read Anathem first, I would probably give it a much more favorable review. But I have seen what Stephenson can do, and this is definitely not his best work. Still, you could do much, much worse. The book is definitely worth reading, but dies not live up to the hype.

This entry was posted in literature and tagged neil stephenson, review, sf. Bookmark the permalink.