Illium and Olympos by Dan Simmons

The Illium series is Dan Simmons’ other, much under-appreciated book cycle. Everyone seems to know and love his Hyperion novel which is just exceptional. It is imaginative, interesting, combines several different narrative styles, and has inexplicable central mystery. Simmons wrote three slightly weaker but still interesting books happening in the same universe: Fall of Hyperion, Ednymion and Rise of Endymion. All of them don’t have the range or depth of Hyperion, but are nevertheless very solid Science Fiction. They expand upon the original, tie up lose ends and take the story in different directions. The entire Hyperion Cantos is essentially a single story – and a very good one at that.

I would say that the Illium novels are about the same quality as the three Cantos books. The first one however recaptures a little bit of that Hyperion-esque mystery by purposefully keeping the reader in the dark about certain aspects of this brand new setting. Let me give you a little taste of what can you expect from this book: 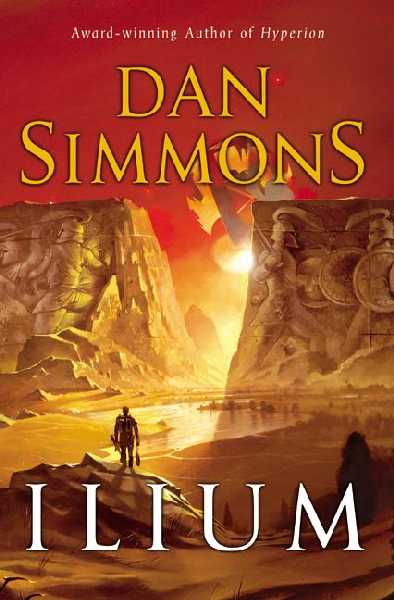 Imagine future Earth: empty, depopulated wilderness with precious few human settlements. Most major cities are empty, crumbling ruins taken over by nature. The entire ecosystem is off its kilter – most niches dominated by wild mutations of genetically engineered animals – such as dinosaurs and prehistoric birds. Surviving humans (less than a million of them) live in fully automated compounds, where all their needs are taken care of by swarms of robotic servitors. These mechanical servants prepare their food, mend their clothing, build and maintain their houses, and ferry them around on carts and droshkies. They have no cars, and no flying machines since all compounds are interconnected by “fax nodes” – instant teleportation devices.

These remaining humans have no jobs, no art, no science. They are illiterate, shallow and spend most of their time at lavish parties and social gatherings. Very few have any kind of interest in the past – and even those who do, struggle to wrestle secrets of the ages from old crumbling ruins, and musty old books they can’t even read. No one knows what happened to the millions of people who have once inhabited the planet. There are some stories about plagues, wars and that sort of stuff. There is also talk about post-humans who have faxed most of the base-line population into the massive orbital rings that surround the planet – or something like that. Post humans built the rings, the fax nodes, the servitors and pretty much every other advanced technology that is used today. Then they left to live in the rings. No one really ponders the past too hard though because on their hundredth birthday each person “ascends” into the rings to live among the post-humans. Or at least that’s what people think is happening.

Then again, no one has actually seen a post human in centuries and their technology is in a dire need of maintenance slowly starting to fail. As if there was no one up there in the rings anymore. 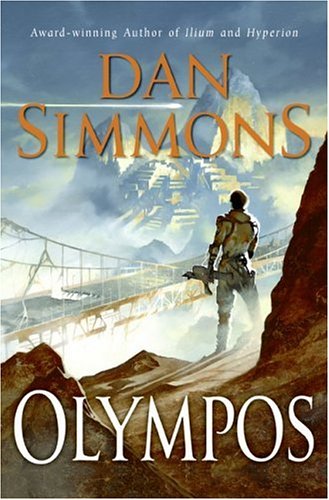 Unbeknownst to the humans, there is other intelligent life in the solar system. The Jovian space and the asteroid rings are populated by Moravecs – self aware machines which descended from the early space exploration and commercial mining automatons. They are have their own autonomous society and culture and they have long ago lost contact with inhabitants of the Earth. They are a bit concerned because after few centuries of virtually nothing happening on Earth, they are now picking up intense quantum activity from the vicinity of Mars. Someone or something is essentially ripping holes in the time space continuum. So they decide to send a team there to investigate.

What is happening on Mars you ask? The Illiad, that’s what. Literally. Mars has been terraformed almost over night. There are Greek gods residing on Olympus Mons, an authentic city of troy, Agamemnon with his armies, Hector in his crested helmet. The whole nine yards… Why? No one knows – it is just happening there.

A lot of people get discouraged by the large amounts of Illiad Simmons essentially copied in this book. For example, the book starts by quoting the beggining of Wrath of Achilles word for word, until it veers off in a different direction. The amount of research the author had to do for this book is actually quite impressive. The names of the heroes, the sequences of battles, minutiae trivia about famous Greek and Trojan heroes are all there. In fact, sometimes it almost seems like Simmons is showing off his deep knowledge of the Homeric masterpiece by indulging in very detailed descriptions – be it of battles, armor, clothing or back stories of some minor characters. Those parts of the book can be a little bit on the dry side – especially if you are not a Homeric scholar. At one point I had flashbacks to my freshman year literature class, in which a crazy professor made us memorize chunks of the text and mercilessly quizzed us on names of minor heroes,a or useless factoids such as “who held the rains of this heroes chariot in this particular battle”. Ugh… I got over it pretty quickly though.

Even if you are not a big fan of Illiad, these books still have a lot to offer. I would say it is worth to sit through some of the initial Homeric data dump, because soon enough things get really interesting. The action jumps between three main story lines. One follows a groups of Earth-bound humans who decide to unravel some of the mysteries that surround the post-humans and their current absence. One keeps tabs on the Moravec Mars expedition, concentrating mostly on the quirky personalities of some of it’s members – a deep sea adapted Shakespearean scholar from Europa, a crab like deep space adapted Proust fan from Io, and etc.. The third thread follows the Martian edition of the Illiad which soon enough de-rails and departs from the Homeric script. All these threads slowly converge upon each other, up until the central mysteries of the setting are revealed.

Simmons is pretty good with his pacing, and keeps the action going. Sometimes he really abuses the old writing trick of ending each chapter with a mini-cliff-hanger but in this particular setting it works quite well. It keeps you reading – so you will rip through a chunk of Illiad in no time, because you really want to find out what happened to the human crew, or those adorable Moravecs.

These novels are probably not for everyone. In Hyperion, Simmons teased the readers with Keats. In Illium and Olympos he really goes all out. The book is soaked in literary references. He shows off his knowledge of Illiad, Aneid and all the surrounding texts but he doesn’t stop there. He delves into Shakespeare, analyzing his sonnets, and playing around with The Tempest. He also offers some very deep analysis of Proust. He quotes various poets, and scholars. But it is not boring – Simmons’ interpretations and literary allusions are usually rather interesting, and apropos what is happening to the characters at the time. Personally I love this sort of thing. I love when my science fiction contains some well researched academic discourse – be it scientific or literary one, I don’t care. Your millage may vary.

I highly recommend these books – they have action, suspense, some very deep literary discussions and a really awesome dystopic setting. If you don’t get scared away by all the Illiad, Shakespeare and Proust you will really enjoy them. I promise.

This entry was posted in literature and tagged dan simmons, review, sf. Bookmark the permalink.


One Response to Illium and Olympos by Dan Simmons